Russia is striking back after a “stab in the back by an accomplice to terrorists” by changing the “game” in Syria.

Moscow’s retaliation is not just about severing economic and diplomatic ties. It is pursuing a policy that could tie Turkey’s hands in Syria.

Ankara never received international backing for a safe zone across its border, but Russia has now ruled that out.

The deployment of S-400 anti-air missiles means Russia has effectively imposed a no-fly zone over Syria.

And now, Moscow seems to be moving closer to a group that has been the US-led coalition’s main ground force in Syria – a group which Turkey, itself a member of that coalition, calls “terrorists”.

The Syrian Kurdish forces (YPG) is a US-backed Kurdish group that has pushed the Islamic State of Iraq and the Levant (ISIL) back from areas along the border with Turkey.

In an attempt to change the solely “Kurdish face” of anti-ISIL ground troops, it aligned with some Arab brigades to form “the Syria Democratic Forces” (SDF).

No doubt a further strengthened YPG will anger Turkey, which has long feared that Kurdish autonomy in northern Syria would stir up similar sentiments among its own Kurdish population.

The SDF are now engaged in a fierce battle with Turkey-backed opposition factions in what is considered to be an important corner of Syria – the northern countryside of Aleppo.

To be more specific: the area west of the Euphrates River, which Turkey calls a red line.

The SDF captured some opposition-controlled towns close to the Turkish border of Kilis – known in Syria as Bab al-Salameh, an important lifeline for rebel groups.

Russian air strikes have been targeting the area for days now.

Control there would allow the YPG to link predominantly Kurdish villages in the north, like Afrin, to areas under its administration from the town of Kobane to the Iraqi border.

To do this, the YPG must first take control of Jarablous, an ISIL-controlled town along Turkey’s border.

There was talk of a US-backed Syrian Kurd offensive in Jarablous in the summer. That never happened, as Turkey threatened a cross-border operation.

Ankara apparently got the guarantees it wanted from the US.

The Kurds won’t advance in the Aleppo region, and in return the coalition would be given access to Turkey’s Incirlik air base from where it can launch raids against ISIL.

RELATED: Safe havens are needed in Syria – more than ever

Days before the Russian plane was shot down, the US said it would start an operation with Turkey to finish securing the northern Syrian border area to cut off the remaining ISIL lifeline. Since then, there has been no talk about this military operation.

The rules may now have changed. The YPG has still not pushed west of the Euphrates, but along with its allies, and with the help of Russian strikes, the SDF are threatening Turkey-backed opposition groups in another key border crossing, Kilis, west of Jarablous.

Losing control of the northern countryside of Aleppo would be a setback for the opposition. Turkey, too, would lose influence.

But Russian President Vladimir Putin seems to be eyeing an even bigger victory. He called on the Assad government and the political wing of the YPG to unite. This has still not happened – at least not officially.

But Syrian Kurdish officials have said they are ready to work with anyone fighting ISIL, and anyone who works for a united, secular and democratic Syria.

Such an alliance would change the battlefield and the balance of power on the ground. 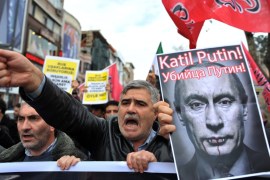