By DC Dispatches and Christopher Sheridan

It is a controversial decision that got buried in all the talk of terrorism in the wake of the November 13 attacks in Paris that left 130 people dead.

But plenty of people noticed and debated the US food safety regulator’s move last week to allow a company to sell genetically engineered salmon to customers.

And now, the decision on how to label it is just as controversial.

Starting Tuesday, the US Food and Drug Administration (FDA) will open the door for the public to weigh in on how to label salmon that has been genetically engineered.

Last Thursday, the FDA ruled that it is. It is the first time they have given the okay to eat an animal that has been tinkered with by scientists.

The decision will allow AquaBounty Technologies, a company with offices in Massachusetts and Prince Edward Island, to market its salmon in stores.

AquaBounty farms its fish and says it grows the salmon faster and cheaper without exploiting the ocean. But critics, like the Center for Food Safety (CFS), argue genetically engineered (GE) food is dangerous to public health.

They plan to fight the FDA’s decision in court but have yet to file the paperwork.

The issue of labelling is just as controversial.

According to the FDA, AquaBounty will not be required to label its salmon as genetically engineered because they only require labelling “if there is a material difference – such as a different nutritional profile”.

In the AquaBounty case, they “did not find any such differences”.

Instead, they are asking AquaBounty to voluntarily label their product.

As a result, Jaydee Hanson, from the CFS, calls the public comment period on labelling a sham and “a shameful make work project on the part of FDA”.

Three major US stores – Target, Whole Foods and Costco – confirmed to Al Jazeera that they will not be selling the salmon when it becomes available. 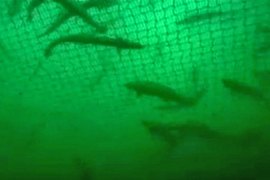 Killer virus which spreads like wildfire is causing concern among US scientists and fishermen.