With rare exception, Muslims appearing on mainstream Western news outlets are asked, in some way, to apologise for the Islamic State of Iraq and the Levant (ISIL). At a minimum, they are expected to denounce and condemn the terrorist attacks in Paris – but not the one in Beirut the day before, perpetrated by the same terrorists. Some call it a litmus test, but I think it’s more pernicious than that, and it extends from the media, as most things do, into popular consciousness and daily interactions with Muslims.

For example, at a book festival, where I was discussing literature, a woman in the audience asked if I was Muslim. I don’t usually answer questions about my religion because I believe one’s spiritual inclination is a private affair. Because I hesitated, she assumed that I wasn’t, so I reflexively corrected her that I am Muslim, because I’m proud of my religious heritage, even though I resent the question. She followed up – because there’s always a follow up to that non-question prelude – with: “What do you think of what happened in Paris?” And that is not really a question either.

I’ll say here, as I said then, that I do not apologise for ISIL, nor will I answer the endless demands for Muslim individuals to condemn their attacks. The same question isn’t posed to non-Muslims, so I can only assume that I am asked to distance myself from ISIL because the belief is that I am associated with them. It follows then that the person asking the question assumes I am a monster, one who must prove otherwise to avoid being shunned or worse.

Most of the time, at least where mainstream media is concerned, those who grovel and condemn are not believed anyway, because it’s not really a question in the first place. “Do you condemn ISIL?” in any verbal form is an accusation, a linguistic affront delineating “us” and “them”. It is an insult and an offence. And I will not engage with it.

The West, principally the United States, has plundered and laid waste to cities across our planet. They decimated Iraq, apparently for corporate profit. One of the most ancient civilisations on our planet, splendid and magnificent even under a tyrant, now lies in ruins, her sophisticated society dismembered and degraded in unspeakable and still untold ways. The tentacles of Western terrorism have reached to every corner of their nation, every layer of their lives, every moment of their culture and economy. The instability and denigration instigated by Western forces then marched to other Middle Eastern nations, destroying one country after another. The same has been done throughout Africa and Latin America.

But I have never, not even once, seen an Arab, African, or Latin American newscaster demand that a Westerner prove his or her humanity as a precondition for simple conversation. Most public personalities of the world seem to comprehend that doing so would preclude an intellectual and nuanced discourse, yet this fundamental truth seems to elude most mainstream Western journalists and politicians, particularly in the US.

Despite the fact that the West has visited misery across our planet, even the most simple of citizens in the world understand that ordinary US citizens are not to blame, and they seem to always welcome North Americans as visitors, immigrants and workers.

I don’t fully understand why North Americans – as a mainstream collective, but not necessarily as individuals or subgroups – persistently prove to be an exception in this regard; why they seem to be socially or spiritually impervious to the humanity of others; why they remain intellectually immune even to data, like the fact that of the nearly one million refugees who came to the US since it began its wars in the Middle East in the 1990s, not one – really, not a single one – has been involved in terrorism, and therefore the argument that accepting destitute Syrian refugees poses mortal risks is obnoxiously baseless. Or the fact that, according to the FBI, the overwhelming majority of acts of terrorism in the US are committed by white Christian males.

To some extent, I believe the answer is in culture, American exceptionalism, and white privilege – which is not always white. The epitome of white privilege is the ability to be an individual; to never be required to answer for the sins of those who belong to your socioreligious grouping, but to simultaneously share in the glory of its members’ achievements. I use this term to describe a dominant culture, which, although sometimes multiethnic, conforms to white Christian supremacy.

People of the dominant culture – typically white, Christian Americans – rarely read our books, watch our films, or examine our lives in meaningful or nuanced ways. They have little interest in our languages, music, dance, or art, and only a small proportion have ever travelled to our lands as learners or curious fellow humans.

The sense of American exceptionalism, or supremacy, tends to dampen and even obviate curiosity and, ultimately, empathy. On the other hand, people of colour and people of other nations are voracious consumers of American culture. We watch Hollywood films, read books by and about white American life. We understand Western history and current affairs. We know Western poets, writers, musicians, artists, thinkers, leaders. We cry when they are hurt, celebrate their celebrity joys, and take sides in their battles. We comprehend even the nuance of their regional differences. We see Western white Christian humanity in a way they have never seen ours.

So it does not occur to us to demand that individual white Western Christians apologise for decimating the greatest seats of Arab culture; for instigating and fuelling civil wars throughout the world; for financing and cheering the destruction and erasure of Palestine; for the endless CIA coups of our elected leaders; for the installation of tyrant client regimes; for the theft of resources; for war after war after war; for torture; for drones and for pollution.

In the final analysis, white privilege is not really a privilege, and American exceptionalism is an intellectual anaesthetic. They are barriers to social and spiritual evolution, toxic things that suffocate reason and pollute discourse with frightening ignorance and arrogance, exemplified now by the ceaseless requirement that Arab and Muslim individuals perpetually prove their humanity and justify their lives on demand.

Susan Abulhawa is a Palestinian author. Her latest novel, The Blue Between Sky And Water (Bloomsbury 2015), has sold in 21 languages so far.

She is also the founder of Playgrounds for Palestine. 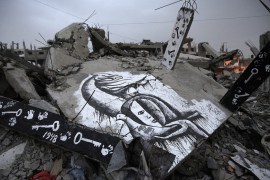