Bernie Sanders doesn’t like brushing his hair. And if you ask some of his staff, they’ll roll their eyes and declare, “enough about the hair already”, as one did to Al Jazeera recently.

Even the Vermont Senator and Democratic candidate for president is getting tired of being asked why he won’t brush it.

“I think he’s been asked more times than he cares about,” says Symone Sanders, national press secretary for Sanders’ presidential campaign. “He doesn’t think his hair is pertinent news to Americans.”

Still, hair is as important to a political campaign as policies are. A 2007 study at Princeton University showed that the outcome of 70 percent of political races could be predicted simply by showing voters photos of two candidates in various races. In other words, voters made snap judgements on who they’d vote for based on how they looked.

But that’s exactly the point Sanders is trying to make. “I think it’s refreshing,” Symone Sanders admits. “It’s just Bernie going out there and being Bernie.”

Sanders doesn’t look like a traditional candidate for president. Jumping on board his campaign means embracing his unkempt style as much as it means embracing the democratic socialist’s policies on Wall Street, Syria and the minimum wage.

“It makes perfect sense for him not to comb his hair,” says Lara Brown, professor of political management at George Washington University. “His personal style, which tends towards the disheveled, reflects his anti-materialist, egalitarian beliefs.”

Indeed, Sanders’ independent approach to politics is what has defined his career for the past 25 years in the US Congress. On nearly every issue, he is to the left of most American politicians. He supported rights for gays and lesbians and a universalised approach to the private US healthcare system many years before most Americans did. He has consistently received a 100 percent pro-choice voting record by the National Abortion Rights Action League. He voted against sending US troops to Iraq in 2003 and spoke out against the North American Free Trade Agreement (NAFTA) in the 1990s. He’s backed proposals to raise the federal minimum wage to $15 an hour, much higher than most of his colleagues. He recently argued during a debate in Iowa that, if elected president, he would break up any large banks that don’t comply with greater regulation and scrutiny.

Some analysts argue his image is working.

“It makes him authentic, a rather important attribute in this presidential cycle when voters are attracted to unscripted candidates who act and sound real,” says Bruce Newman, a marketing professor at DePaul University, whose upcoming book, “The Marketing Revolution in Politics”, deals with how candidates push their message in the 21st century.

Although trailing his main Democratic rival, former Secretary of State Hillary Clinton, in nearly every poll, his support has grown over the past three months. A recent New York Times-CBS News poll showed he’s gained ground since September.

But Bernie Sanders’ hairdo is not the only one taking centre stage. On the Republican side, real estate mogul and reality TV star Donald Trump has faced years of ridicule about his hair.

“Which is ironic because a fox often appears on Donald Trump’s head.” But Trump wears his hair proudly, particularly during this campaign. Back in August, he asked a supporter to come on stage during a rally to pull on his hair to prove it wasn’t a toupee.

Some argue, however, there’s a sexist element to the politics of hair. No one in the current campaign has faced more image scrutiny than Hillary Clinton. Ask her communications director whether a woman could get away with the Bernie Sanders look, and she lets out a big laugh.

“So hard to answer that question because you could say, ‘Well, some have,'” says Jennifer Palmieri, who worked for US President Barack Obama before leaving the White House to work on the Clinton campaign. But she agrees there’s far more attention on women’s hair in political campaigns than men’s hair.

“People have been talking about her hair for decades, and it’s sort of baked into our expectations,” says Palmieri.

So, will Sanders’ style start a campaign trend of candidates flaunting bedhead? Probably not, says Newman.

“In the end, American voters will always be looking for that John Wayne hero-like figure who will fix everything that is wrong with the system,” he argues. “Or, in this campaign cycle, maybe it will be Jane Wayne.” 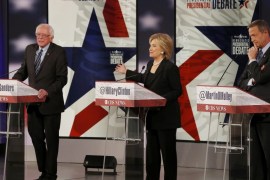 Sanders puts Clinton on the defensive for her 2003 vote backing Iraq invasion in second debate for party’s nomination. 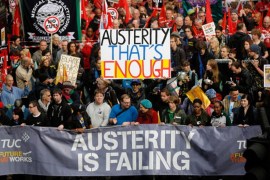 Reanimation of the transnational left

As the era of economic crisis produced a decline in living standards, the centre-ground began to fragment.