“We waited and hoped for more than four years, then decided we had to leave,” Hassan tells me in flawless English. He’s a 32-year-old lawyer from Damascus. He’s with his wife and young son. They’re all smartly dressed in new winter coats. His wife offers a warm smile despite the dreadful conditions they are in.

We’re standing on a filthy, litter strewn clearing on the edge of Turkey, a few metres away from the Aegean Sea. The only shelter is from spindly trees that are shedding their leaves.

There are hundreds of refugees down here waiting for rubber boats to ferry them to the Greek island of Lesbos. So far they’ve been waiting for days.

A mixture of bad weather and increased coastguard patrols have slowed the traffic down. There’s no food or water down here and of course no sanitation. The nearest shops are a two-hour walk away.

I’ve been meeting refugees along this coast all year. In January, I was in Mersin, when everything was much more secretive. Over several days large decommissioned container ships would be filled with refugees before heading to Greece or Italy. Everything happened under cover of night, any filming we did would have to be under cover.

Then as the numbers increased by the tens of thousands and the weather got warmer people made less effort to hide. Now you can see the refugees in broad daylight, and they’re often happy to speak.

And all year there’s been one constant: Every refugee I’ve spoken to would rather be in their home country. They’re not heading to Europe to live off state handouts, they’re going because they crave stability and a future for their children.

Usually, when interviewing people in these places a crowd gathers around you. Others will then tell their stories. Then they ask where I’m from. I’m British. Can I help, I’m often asked.

But I have no influence and I feel useless. By accident of birth I have a passport that allows me to drive up the coast and take a $20 half-hour ferry trip to Lesbos. These people have shelled out a minimum of $900 each to squeeze onto a dingy to make the same trip. On the morning we were there, 14 people, seven of them children, drowned when their dingy overturned.

After all they’ve been through in Syria it seems bizarre and cruel that Hassan and his family must pass this final challenge of crossing the Aegean if they’re to have any hope of a normal life. 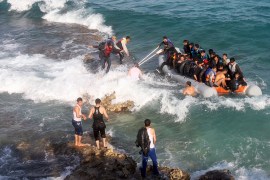 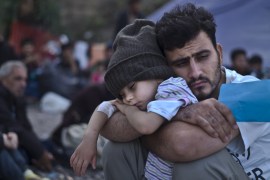