Beit Lahia, Gaza Strip – Scores of children in matching uniforms pass by on the busy road in Gaza’s Beit Lahia district, some chatting loudly, others singing songs and running ahead, taunting their friends to try to catch them.

Wissam keeps his eyes fixed on the ground as they pass. Barefoot and kneeling on the wasteland, he continues to pick up rubble with his three brothers. “I would love to go to school,” the 11-year-old says meekly, “but for now I ask God to give me good work for today so I can help my family.”

A few metres away, Wissam’s brother, Jihad, leans against the family donkey, his head lowered. The seven-year-old seems exhausted.

“This is the work of death,” says Abed, the oldest of the brothers, as he unloads another bucket of rubble on to the donkey cart.

The words he uses are laden with significance. It isn’t only that the work they do is draining, but that the stones they pick are the remains of houses destroyed during Israel’s last war on Gaza.

All three boys are acutely aware that their lives are drastically different from those of their Israeli peers.

Abed, as the oldest, has taken on the role of father figure, keeping an eye on his siblings, tending to their needs and keeping their spirits high.

“We have to do this because our father is disabled [he has muscular dystrophy] and we must help our family and give money to our mother for food,” Abed says.

“I like to tell my brothers things like this while we work so they understand why we have to work and so they don’t get upset.”

The brothers are quiet as they work. They started at dawn, meticulously scanning the ground, combing it with their fingers for pieces of concrete and breeze block that they can sell on.

At 2pm, after collecting their fourth cart of rock, they walk slowly to dump it at a nearby construction site. Between them, the three brothers earn $6.

“The pay I get is what I deserve,” says Abed.

As they make their way home they become more talkative. It’s early afternoon and the children are relieved to be released from the burden of earning a wage.

“Donkey’s just called Donkey,” Wissam says with a toothy grin. Jihad laughs and Wissam responds by making Donkey rear up his hind legs. Jihad jumps up and down, screaming in delight.

“I love playing with my brothers,” Wissam says, giggling at how easily excited his younger brother can be.

The house where they live is small, with no toilet inside. There is no furniture and nothing hangs from the walls or covers the floors. There are just upside-down plastic buckets and metal pots that serve as seats, although there are not enough of them for everyone.

The room where the brothers sleep has no windows. There are just two dirty mattresses on the floor.

Wissam sleeps beside his brother Jihad, but he never sleeps well. He has nightmares every night.

The school where he and his family sought shelter during the 2014 war was hit by Israeli missiles. Eighteen people died in the attack. Now, when he closes his eyes in his cold, dark bedroom, the image of human and donkey body parts intermingled on the school playground returns to him.

Wissam is weighed down by what he has seen and the crippling poverty his family suffers, but unlike his oldest brother, Abed, who carries the burden of being the family’s main breadwinner, he still finds some enjoyment in his childhood.

He hugs his favourite one.

“It gives my family eggs,” he says, smiling, and continues his song, as Jihad begins to jump up and down to it.

Abed chucks a broken bicycle down from the roof to the ground. It’s the only toy the boys and their four other siblings have.

“Life is difficult here. The Israelis attack us, they make everything difficult, but some people are in an even worse position than us,” says Wissam, pensively. He’s sitting on an overturned pot on the sandy ground.

As he speaks, Jihad mounts the broken bicycle and drags it around the sand with his feet as fast as he can. It’s missing a tyre but, to Jihad, this just makes the challenge of riding it all the more fun.

Wissam runs off to get Donkey. He wishes he had a football, but adventures can still be had with the placid animal, which the brothers like to pretend is a horse as they ride it around the run-down area dotted with the homes of some of Gaza’s poorest residents.

Their father, Ramzi, sits in a corner in a beat-up wheelchair, smiling as he watches them play. “I thank God for them every day,” he says.

Passing Donkey on to Abed and Jihad, Wissam begins crawling around in the sand. He’s pretending to be a soldier; his outstretched fingers are his gun.

Two kilometres away is the wall that divides the Gaza Strip from Israel, Wissam angles his body towards it and crawls slowly closer.

He tells himself that the Israeli soldiers positioned along that wall are, for once, afraid of him.

Al Jazeera: What possession means most to you?

Wissam: I wish I had a football, shoes, clothes. I have no games. But I like the chicken because it gives my family eggs.

Al Jazeera: What is your happiest memory?

Wissam: When my father took me to the amusement park and zoo. I was so happy. I was with my family, and it was the first time there for me as well. I had wished to go there and my father promised we would go, and when the war ended he let us go. We saw the lion. I love the lion because of the way it moves. Also there were games and swings. I was so happy in that moment, we survived the war, and now we were able to go to the park.

Al Jazeera: What is your saddest memory?

Wissam: When they targeted the school we were sheltering in. It was terrifying. All the donkeys were killed, and the pieces of them were all over the ground, along with pieces of peoples’ bodies all over the place, cut into pieces. You would see a head, a leg, hands of people, pieces of brain. I saw all of this. It was very sad for me. I was expecting to die.

Al Jazeera: What is your favourite place?

Wissam: The amusement park, because it feels like I am a new and different person there.

Al Jazeera: What is your favourite cartoon or TV character?

Wissam: Tom and Jerry, because they are always chasing after each other and fighting. It’s funny.

Al Jazeera: What do you worry about most?

Wissam: My biggest fear is another attack by the Israelis. I’m afraid that they will take away our home and land.

Al Jazeera: If you could change one thing in the world, what would it be?

Wissam: If I was able to, then I would help every child and poor person, all those who suffer like us. 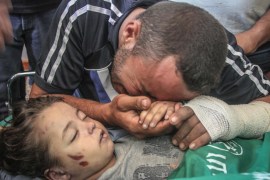 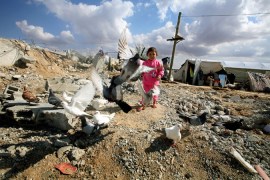 Babies die in Gaza due to the resource siege

A Palestinian baby dies in a UN centre fire as the ongoing power shortage in Gaza puts children at constant risk.