Twenty-three-year-old Simon Moubarik stood silently during a short memorial for those who died on Friday. He said he was numb, but he didn’t cry.

Like many of the young in this mourning city, he is traumatised, shocked and saddened by what happened.

“It breaks my heart,” he said, after a moment of silence observed on Monday at his university, the Sorbonne, which lost students in the attacks. “We are in France and we are not necessarily safe. Because some people are cowards and attack anyone in any manner possible. Whether in Syria, Lebanon or France, it’s all the same thing.”

Feature: Back to school: Students reflect on Paris attacks

“Even though I was not there, I feel I have been targeted,” he added. “It could have been us.”

The attacks have cast a pall over Paris, as the sound of sirens becomes the city’s new soundtrack and police and military sometimes outnumber pedestrians on the streets. But it has cast an especially large cloud over the cosmopolitan neighbourhood known locally as the XI, where most of the victims died, as well as on the young people that live in and frequent the district.

Home to the Bataclan concert hall where the most deadly of the attacks occurred, the area is the City of Light’s version of Brooklyn in New York or the East End of London. It has a lively, multicultural mix of working-class families, gentrified professionals and the ethnic restaurants and arty venues they patronise.

It is also a lure for the city’s young, who hang out on the banks of the Canal Saint Martin, strumming guitars and drinking wine, or head for the clubs and venues such as the Bataclan.

Now, many of those who live in the neighbourhood believe that the Islamic State of Iraq and the Levant (ISIL) has targeted them precisely because of their diversity, tolerance and joie de vivre.

“There is almost a bipolar feeling between solidarity and mistrust,” said Antoine Goupil, a 26-year-old schoolteacher who lives in the neighbourhood, and whose students are mostly Muslim and from North Africa.

The attacks this weekend came in the same neighbourhood as the shootings in January, when gunmen stormed the editorial offices of the satirical magazine Charlie Hebdo. Many denizens of the XI still harbour nightmares from that day. Now it is all coming back, and hitting closer to home.

“Hebdo really left a mark on me, it really touched me,” said Albertine Jeannet, a 15-year-old from the district. “It was the first time that I was faced with an attack. I was really afraid of going out.”

But whereas the Charlie Hebdo attacks pinpointed a specific target for specific reasons – ‘blasphemers’ of the Prophet Muhammad – the recent violence seemed to be aimed at an entire nation perceived as receptive to Hebdo’s irreverent tone.

That, many residents speculate, is why the attackers wrought havoc at a football match, sprayed concert-goers with gunfire and shot at diners in cafes and restaurants. They wanted to strike a blow against Frenchness itself, and to send a message also to the young, locals said.

“When Charlie Hebdo happened, we thought ‘OK, they attacked a newspaper,'” said 39-year-old Siham Dagois, who lives near the Bataclan. “They want to deprive us of our sense of leisure.”

People now feel under pressure to mount a response to the violence, but in a sense the best way they can flout the attackers’ aims of disrupting Parisian life would be to carry on with their lives as if nothing had happened, said one neighbourhood resident.

Feature: ‘My brother is dead’

“I think the worst part is how well the message that ‘nobody is safe’ has been conveyed – the entire city feels like a target right now,” said Ford Leland, a 25-year-old marketing consultant who lives near the sites of the attack. “However, the present mood in Paris is not one of fear. There is a calm but powerful sense of solidarity in our streets as shopkeepers choose to conduct business as usual without caving in to the threat.”

Leland’s feelings are emblematic. A slogan on a sheet draped over a statue of Marianne in the Place de la Republique that borders the 11th arrondissement, ‘Not Even Scared,’ has become the motto among the attack’s survivors.

But some are questioning that mentality.

“I don’t agree with some who claim ‘Not even scared’ as many placards read,” said Jeannet. “Not afraid to express yourself, OK. But not afraid to be faced with armed gunmen when you have only words to fight them off? That’s plain frightful.”

Jeannet noted that her teachers had instructed her and her classmates to vary the route they took as they walked through the district. Police cordons, troops and emergency measures that could result in more curfews are now in the offing, too, after President Francois Hollande requested a three-month state of emergency, which will allow him temporarily to bypass some civil liberties.

The reputation of the 11th arrondissement has already taken a hit in this climate.

“One of my friends messaged me and said that the XI is the new no-go zone,” said 22-year-old Adele Melice. “I didn’t know how to respond.”

Feature: ‘You’re in a bar, then there are dead people’

Melice referred to Muslim-majority districts in Paris where the conservative American news organisation Fox earlier this year claimed non-Muslims were barred from entering and police feared to tread because Sharia held sway. The mayor of Paris briefly considered suing the network, saying its reporting was irresponsible.

Goupil offered a very French solution to the issue – talking about the attacks. That would be the best way to take the neighbourhood and city back from the attackers, he said.

“The discussion in the classroom will continue,” he continued. “We have to continue to stay here and to cherish principles and valour. We need to recommence. It depends on what the class needs. If I feel the students need to talk, we will talk. In January, we talked for two weeks.”

That was the sentiment at many schools, who say the effect of the massacres will linger for some time.

At Victor Hugo Junior High School near the attack sites, on Monday, students put away their books, pens and paper. Instead, they spoke about the attack, asked questions, and cried.

That was because they lost one of their own: Kheireddine “Didine” Sahbi, a talented violinist and Sorbonne University musicology student, had started working as a hall monitor just this year. He died at the Bataclan.

“I once got a cross in my school book from him for misconduct,” said 12-year-old Clement Bernard, after a minute of silence observed in memory of Sahbi. “But I didn’t hold it against him because I really liked him. He was super nice.”

Some who had just learned about the monitor’s death were shocked and found it hard to speak. Many just wanted to express themselves, to honour him.

“We spent the morning writing our names and messages on paper for his family yesterday. Some drew pictures,” said Bernard.

Some of the messages have been typed and posted on the walls at the school’s entrance, along with flowers and candles.

“Kheireddine was a nice monitor,” read one message. “He was new but is now engraved in the halls of Victor Hugo. I will always remember him. Kheireddine, your minute of silence has been respected. We have laid flowers, candles. We have let tears flow along with the ink. We all love you.” 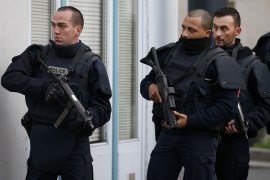 Deaths in Saint-Denis suburb police operation include female suicide bomber who blew herself up, prosecutor says.