I remember it clearly. It was August 19, 2011 – World Photography Day. To commemorate the day in 1839 when the French government made public the photographic process known as daguerreotype, developed by photographer Louis Daguerre, I decided to capture some memorable photographs of my own.

I headed to the Jamia Masjid in the old city of Srinagar, the summer capital of Kashmir, hoping to shoot those who gathered there after Friday prayers. It was the third Friday of the holy month of Ramadan.

I had a bit of an affinity with the historic mosque. It had treated me well in my fledgling career: some of my most powerful photographs had been clicked there.

I arrived with some photojournalist friends – Shahid Tantray from Kashmir, Narciso Contreras from Mexico, and Rajesh Iyer from Delhi, India – in the early afternoon and was happy to find that other photojournalists were already there.

I took a lot of pictures, but there was one that really stood out from the rest. It was of a Kashmiri mother praying inside the mosque as tears rolled down her cheeks. For me, it captured the stories of all the mothers of this wounded paradise; the women who pay the highest cost of the conflict – physically, psychologically, culturally and economically; the thousands of women widowed and those who wait in vain for their disappeared husbands and children.

The Masjid had proven lucky for me once again, I thought.

But I was wrong, very wrong.

After the prayers had drawn to a close, the worshippers began to depart. We were also preparing to leave when, in the main square outside the mosque, some young boys started shouting pro-freedom slogans.

Some other photojournalists were following them, taking their pictures. We, too, wanted to capture the scene.

Then some of the protesters started pelting stones at the police and paramilitary forces.

I had only clicked a few pictures when a joint team of Jammu and Kashmir police and Central Reserve Police Force (CRPF) troopers intercepted me in a lane. “I’m from the press,” I told them.

Those were the same words I repeated, over and over again, as they set about beating me.

There were around 15 of them in total. Some used the butts of their guns; others used bamboo sticks. Those who couldn’t reach me with a weapon just punched and kicked.

I gripped onto my camera, but I could feel them trying to grab it from me. My vision went blurry; I fell to the ground. At some point, the camera slipped from my fingers. My laptop, too, was taken.

They tore at my clothes and kept beating me as they paraded me naked to the gate of the police station.

I was dragged inside, but the beating didn’t stop.

They told me to put my clothes back on and then searched my pockets, removing everything. I was kicked into the lock-up.

There were four boys already inside. One had been throwing stones; the other three had been arrested simply for being related to stone-throwers.

They offered me juice and water, but I protested. I was fasting, I explained.

They insisted. I was in a bad state and needed to drink something, they said. I couldn’t argue with that.

They took care of me as best they could, these young men who had been torn from their home in the middle of the night. They examined my injuries. My nose and arm were bleeding profusely; my whole body throbbed with pain. The boys attempted to ease it, applying pressure to my arms and legs.

I will never forget them and how they put their own fear aside to care for me, a complete stranger.

Neither will I forget the policeman who came every 10 minutes or so to inflict his special brand of mental torture upon me. He hurled abuse and described how he would hang me upside down, naked, and beat me until morning. He made sure that I knew that more physical abuse awaited me.

There was one among them, however, who seemed kind-hearted. He’d come to see me when none of the others were there and console me as best he could. He asked for the telephone numbers of my family and acquaintances. He’d call them, he said, and they would come and get me released.

I wanted to believe him, but as I sat there in that lock-up, I felt as though all my dreams were shattering around me. Surely the cops would have broken my camera and laptop, I thought. How would I work without them? And what would my family think when I didn’t return home?

Suddenly, we heard screams from outside the police station – piercing, bitter screams. The policemen and CRPF personnel were beating some boys mercilessly.

Then I heard a voice I recognised – but I wished I hadn’t. It was Narciso. He, too, was being beaten.

I felt certain then that they would kill us both in some kind of staged encounter. After all, no one knew that we’d been arrested; they’d be able to explain our deaths away however they wanted. My heart pounded.

Narciso was taken upstairs, and a few minutes later, they came for me. They kicked and slapped me repeatedly as they took me up the stairs.

The station house officer was sitting there. He told the others not to slap me. He would show them how to do it, he said. Then he placed one hand on either side of my face and slapped me hard, twice.

He kicked me into a room. Some police officers and CRPF personnel were inside. So was Narciso. He was standing by the wall, his arms and legs bleeding.

They told me to kneel in the centre of the room. Those infamous images from Abu Ghraib prison were stuck in my mind.

The superintendent of police (SP) asked me my name. I shared part of my surname with him. I hoped this might help me. It didn’t. He slapped me, hard.

Then an inspector asked me to close my eyes. I did as he said and another slap followed.

He told me to put my hands over my eyes. I did as I was told, and they all laughed.

An officer offered Narciso juice. “Welcome to Kashmir,” he told him, and they all laughed again. It was like a scene from a Bollywood movie

The SP told a constable to pinch my ears until they turned red. He did it for two minutes until another officer took mercy on me – kicking me to end that particular form of torture.

Then the SP wanted to talk. “Will you work again?” he asked me.

“If I ever see your byline anywhere from now onwards, I will not leave you,” he said.

He described how he’d ruin my career in journalism and get me struck off the roll of the university where I was pursuing my Masters’ degree.

“You press people are working for the army and Indian intelligence,” he shouted. “You are all associated with them.”

I was ordered to go downstairs, quickly. There I saw a friend and fellow photographer, Danish Ismail.

The cops handed him my bag and me my camera, minus its memory card. I will never see that perfect photograph I took again, but it’s there in my mind – a reminder of those perfect moments before my world changed.

Showkat Shafi was released after five hours in detention. He was taken to hospital and treated for his injuries. It took him several weeks to recover. He still has nightmares.

Narciso Contreras was released on the same day and admitted to hospital. After this incident, he left Kashmir. He went to Syria in 2012 and won a Pulitzer Prize for breaking news photography in 2013.

The article has been produced in collaboration with the Human Rights Centre at Al Jazeera. 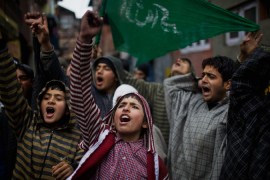 The rise of Kashmir’s alternative media

Despite strict media controls a host of new voices is emerging from Kashmir. 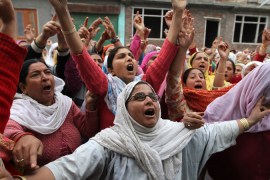 Since the partition of India and Pakistan, Kashmir’s voice has been largely ignored. 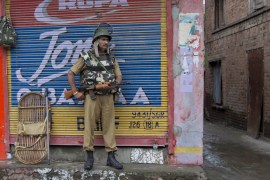 The bordering region has been defined by decades of subjugation, violence, and territorial conflict.