Sydney – It was a former policeman – now a lawyer – who got the biggest laugh of the day.

“When the Teenage Mutant Ninja Turtles called something radical,” he said, “they meant it was cool. Now, being ‘radical’ is a punishable offence”.

The laughs, though, were thin on the ground on Sunday.

At “Innocent until Proven Muslim”, a one-day conference in the west of Sydney, the focus was on telling stories of harassment and oppression – and how to resist.

Resist “forced assimilation” and “oppression” were the conference messages.

To those ends “we defend you in every action you take” shouted one conference speaker.

The stories were powerful.

A respected community leader told of having his suitcase emptied – his underwear examined – as he came through Sydney airport; being interrogated there for hours.

Another man said he’d had his passport taken from him. The Australian government could not, or would not, explain why.

A woman – whose son is in a high-security prison for stockpiling chemicals that could make bombs, and firing a gun at police – complained of harassment when she tried to visit him, and the increasingly strict conditions in which he’s held.

RELATED: Does Australia have a racism problem?

But everything was framed as “them” – the government and the media – versus “us” – true Muslims.

And the response, organisers and participants agreed, was to fight back.

Australia’s government talks a lot about community engagement and making links, persuasive and coercive, with Muslims.

The message on Sunday was that both should be rejected.

Muslims who helped with so-called de-radicalisation projects were accused of selling out. Muslims, it was said, shouldn’t accept Australian values which contradict their faith. And children shouldn’t be “forced” to sing a national anthem, the words with which they disagree.

As for Muslims approached by the apparatus of the state? They should refuse to help.

A leaflet being handed out advised on “How to Deal with Spies”:

“Insist on your right not to meet, and ignore repeated attempts by phone. Yes, hang up! It is outright haram [forbidden] to cooperate in any way with spy agencies or to spy on Muslims. It is a grievous crime for which only Allah can give punishment”.

Another key message was to be suspicious of the media, as they only want to create bogeymen out of Muslims, to make money from fear.

Hizb ut-Tahrir, the conference organisers, have a reputation around the world for being confrontational; refusing compromise or concession.

In an interview on Australian television a year ago a spokesman repeatedly refused to condemn the actions of the Islamic State of Iraq and the Levant (ISIL). The very question fed a “warn on terror narrative” he said, with which he would not engage.

On Sunday, the group treated those in the media, covering their event, courteously.

But it’s uncomfortable being in a room where there is such a “them” and “us” picture being painted .

Al Jazeera is viewed more sympathetically than other media, but we were still part of the “them”, sitting among the “us”.

And I couldn’t help feeling a sadness for that division.

Governments may exacerbate the division in the community and the media is hardly blameless.

But events like Sunday’s encourage the gulf to grow. 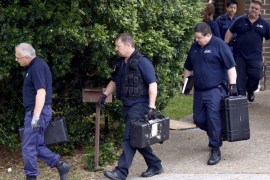 As Australia pushes for stronger counterterrorism laws, federal police announce a young boy may have been radicalised. 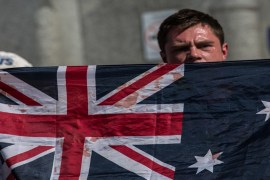 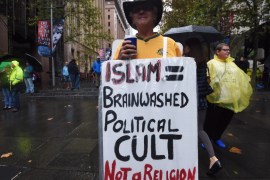