Okinawa, Japan – The governor of this island, Takeshi Onaga, has annoyed both Washington and Tokyo by taking the case of his people against a US military base directly to the UN Human Rights Council.

At issue is the construction of a new US Marines airbase at Henoko beach in Okinawa that the two national governments have declared to be “the only option” for the realignment of US forces in the region, but which public opinion polls and repeated elections have demonstrated to be unacceptable to local residents.

In 2009-2010, the Japanese national government briefly took serious cognisance of anti-base sentiment in Okinawa, but this led immediately to a political confrontation between Tokyo and Washington that brought down the administration of then-Prime Minister Yukio Hatoyama.

Since May 2010, the Japanese government has given up any thought of resisting the US policy of constructing this base.

However, Okinawans have continued to resist, as the election last November of the staunchly anti-base Governor Onaga was one reflection.

At the UN Human Rights Council in Geneva last month, Onaga declared he is “determined to stop the base construction using every possible and legitimate means”. He also pointedly asked: “Can a country share values such as freedom, equality, human rights, and democracy with other nations when that country cannot guarantee those values for its own people?”

Al Jazeera visited Henoko beach in Okinawa – where the US Marine airbase is now being constructed and asked protesters why they oppose a military facility that their national government asserts is to guarantee their peace and security.

“Okinawa is an island of peace. I absolutely oppose making this an island of military bases from which people will be killed. And if we have all these bases here, it means that Okinawa would also become the first place for an enemy to attack.

“More than 80 percent of Okinawans are against the construction of this military base. From our island’s history, we know through experience how horrible is the destruction of war. About a quarter of our population was slaughtered seventy years ago. Even today, we have only 0.6 percent of Japan’s land area, but we host 74 percent of the US military bases.

“We are rightfully angry at the Japanese government.

“We are living in a highly stressful situation in which we don’t know when another military aircraft might accidentally fall from the skies, or when a US soldier might kill someone or rape someone, or when the life of one of our children might be taken in an auto accident.

“Our human rights are surely being threatened.”

“Regarding this issue, history is everything.

“I do have some sympathy for those Japanese who are concerned about China. However, both the Japanese and the US governments well understand our history of victimhood and, nevertheless, continue to use this island for their own narrow benefit.

“In 1945, Okinawa was sacrificed by the Japanese government in a brutal land battle. It was done in the name of ‘national security’.

“Now they want to tell us that we must be sacrificed for national security again and that a new military base must be built here. It’s just too much to ask of us.”

“Okinawans have suffered discrimination from long ago and I want to say that enough is enough.

“We have a right to live, and we want our democracy to return. It is the Japanese government that is discriminating against us.

“Our elections are not respected and are treated like a kind of performance. Although we are supposed to be part of the same Japan, they make our little island host most of the US bases.”

“Okinawa has a beautiful sea that is one of the treasures of the whole world. We don’t want to see our natural environment destroyed.

“In the future such assets will contribute to the Okinawan economy as tourists come here to experience our amazing natural heritage. But if they build the airbase here and damage this coastline, can we really expect that tourists will want to see this place?

“It’s not just about the environment, but also an issue of human rights and the right of self-determination.

“The feelings of Okinawans have been thrust aside, and the governments of Japan and the United States want to decide everything for us. It’s been like this all along, and we have reached the limits of our patience.”

“Okinawans have repeatedly been the victims of Japanese wars.

“We have been the front line in a way that main island Japanese simply don’t understand. And while the rest of Japan was recovering after the last war, we were forced to remain a military colony of the United States.

“They just gave us up for many years as part of their bargain with Washington. There was no law. If an American soldier killed someone, there was no legal recourse.

“When we eventually rejoined Japan, we thought that the constitution would protect our rights. But the situation hasn’t really changed very much because of the Status of Forces Agreement – which is above all Japanese law.

“Our human rights have repeatedly been violated. This is not Japan.” 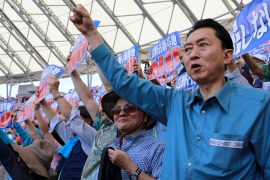 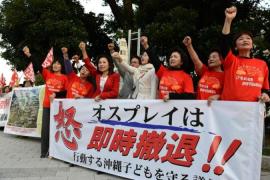 Tokyo and US conspire to remove small town mayor opposed to US plans of building nearby military base. 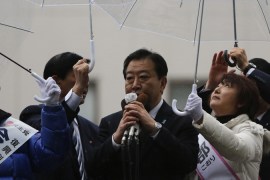 Who will save Japan?

We look at the political struggles of an economic giant facing an uncertain future as elections draw near. 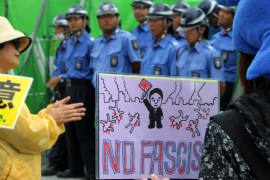