Most stay just long enough to earn the substantial sum of money needed to pay a smuggler to take them across the Bulgarian or Greek borders into the European Union, where they seek safety and a better quality of life.

The Canakkale peninsula in Turkey’s northwest – with its long, sparsely populated coastline just kilometres from the Greek island of Lesbos – has become a launching point from which many refugees make the last stretch of their journey to the EU.

The once sleepy retirement community of Kucukkuyu on the peninsula has become the Turkish coastguard’s depot for the thousands of refugees they intercept every day, as well as a hotbed for smuggling activity. Al Jazeera talked to some of the locals about how the state has been responding to the crisis.

These are all problems created by politicians for their interests. They are wasting these people.

Turkey is already beyond its capacity. This is a heavy burden for our country. Whenever we start to develop, we encounter obstacles like this. We want to become stronger, but we are lagging behind. The citizens will be patient to a point – but after that, there will be problems.

If you ask me, I don’t want the refugees here. Peace should be ensured and everyone should go back to their own places. It is not a good thing for them, either. For example, I have a house, land, and my own country. For me, leaving this means death. As a Turkish citizen, I can’t accept leaving.

They think of Europe as the gate to hope, where everything is at its best, and you can get everything you want. They want to find a future for themselves there because they don’t have one if they stay in Turkey. There are lawyers and engineers among them. Recently, I even saw a general. What are professionals going to do here? They want to go to Europe to work. The standard of living there is much higher.

And they are spending a lot of money – a lot! – just to cross. The ones who get caught come back. They try again to go to Europe. There are those who try nine or 10 times. The authorities take them to Istanbul or Izmir, but the refugees come back to cross into Europe.

I don’t think it is a good gamble. If I were them, I wouldn’t leave the camps. They have money. Those who are smuggling them are getting extremely rich off of them.

To be able to love somebody, you need to put yourself in their shoes. It is a shame. There are babies among them who drown in the sea. It is a shame. Humanity cannot answer for this.

Societies in the Middle East have very low standards of living. There is no law. And when war breaks out, there is the additional complication of sectarian conflict, all of whom claim to be killing for God. In a world which is mired in conflict, the Middle East cannot be an island of peace. External powers support them as well. At the root of all this is oil.

The refugees going to Europe through Turkey and North Africa are forced to do so by the standards of living, not their dreams. When we see them, we pity them; the Turkish state and people have extended help to them.

Unfortunately, the EU, and Germany to a lesser degree, fail on this issue. This is not just a European problem. Saudi Arabia, Iran, Qatar – these countries are wealthy and can take the refugees and help them. But unfortunately, their authoritarian mentality and ways of thinking prevent this.

We see them here. We don’t know a lot about them. They come here and they are either found by the authorities or drown. We feel terrible about all this, but there is nothing else you can do. You can only feel sorry.

This isn’t an issue for society; this is a state problem, and I think the Turkish state is doing enough.

There are more refugees here than last year. We are more aware of it. This refugee problem is a global concern, but because they mostly want to go to Europe, it is a bigger problem for Europe and the EU. It’s up to them to accept the people to solve the problem, but they need to divide the refugees among themselves.

They are going to Europe because it’s their last resort. They would not want to leave their home country, but they have to … They’re going to Europe to survive, to eat and to work. This is their ultimate goal – nothing luxurious. When you offer them things, they just take what they need. Nothing more.

I know refugees are in a difficult situation. I know that they are showing great courage. Some of them don’t know how to swim and have never even seen the sea before, and they try to cross it to Greece. Hundreds of them risk their lives for a journey towards hope.

I think what Turkey has been doing is providing a humanitarian example. They have the freedom to move and live here. The support given by our country is admirable, but I don’t know how it can continue.

Their presence here has created a market for human smugglers. How safe is a three-month-old baby in his mother’s arms crossing the waters to Greece on a dinghy for about seven or eight kilometres? It’s not. I think rather than letting these people roam freely, they need to prevent this illegal smuggling and migration. As long as the war in Syria goes on, these people don’t have homes there. Bombs and bullets are raining on people. I have a heart, and I feel sad for them. Children are dying. Not only that, people are dying.

This affects us. There are resources and expenses being spent on them. Crime is going up, and human smuggling has cropped up here. This affects us as a society.

I have pity for their children, but I’m angry at the adults. My grandfather was 16 when he fought in the Battle of Gallipoli. These adults are running from war.

The coastguard plucks them from the sea and half an hour later, they’re taking selfies. An officer tried to stop them from smoking on the buses and they argued and pulled out their Turkish IDs. They said: ‘You can’t touch me. I’m essentially a Turkish citizen.’

They’re very cocky here in Turkey. They get opportunities our own citizens don’t. I’m against them coming here and becoming a liability for the state. I’m angry.

Last month, there was a woman that I drove three times to the detention camp. They get off the bus on the road and come back. The same woman – three times in a month.

War is a pretext if you ask me. They want to go to comfortable places. Their country is ruined. Even if the war ended tomorrow, it would take long years to rebuild. Their families and children will live in harsh conditions, so they are trying to reach Europe and settle there.

Many countries determine quotas to take these refugees in, but the ones they take are all doctors or lawyers. The ones coming to Turkey are uneducated.

Generally speaking, these people are harmful to us. They come here, and we take care of them. I don’t have a problem with that, but if other countries do what we do, then maybe we can find a solution.

The people who smuggle them have set up this business. This has become an industry. People are trying to earn easy money by cheating these refugees.

I have not been to other places in Turkey, but I can say that they will stay here if they cannot cross to the Greek islands. When they don’t have work opportunities, they will resort to other things. This could be bad.

If world leaders don’t know how to solve this problem, how can we? They need to do the thinking here. If they don’t want a solution, what we think does not have any importance. They don’t care.

I’ve seen many refugees around my house. It’s a very sad situation overall – I find it quite ironic that the countries that caused these problems are the ones that these people are escaping to.

I think all they want is to go somewhere where they can live happily. I believe what they expect is to have better standards for themselves and for their children. I don’t think it’s possible to say whether they’re doing the right or the wrong thing – I think it’s impossible to even think from their perspective.

Yet, part of me is asking: What happened to the days when people would stay and fight for their freedom? Ninety years ago Turkey was in the same situation and everybody here fought for their country. Nobody thought about leaving. And now you see this. If a similar thing happens here, are we going to fight or are we going to try to escape? 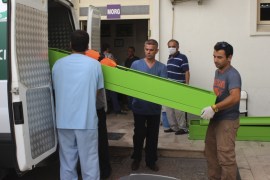 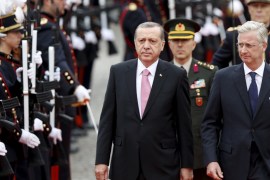 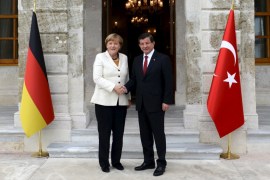