“There have been things like a fish-canning museum, a spam museum and a noodle museum in Japan but no one has looked at the whole gambit, the vast smorgasbord of food in all its glory until now,” co-founder Sam Bompas told me.

Bompas and his business partner Harry Parr are known in London for their wacky ways: they’ve made iconic buildings in jelly; designed a crazy golf course out of cake; cooked on lava; and they’re about to make a snow globe around the top of The Shard, the city’s tallest building.

Their wackiness extends to their wear; on this rainy morning Bompas had on a shirt of multi-coloured mushrooms, patterned trousers and turquoise socks while Parr was more subdued in a light blue shirt with Coca-Cola logos.

They met at Eton and in another age might be described as foppish.

But back to the museum.

The first exhibit takes visitors on a journey through the human body. A big screen shows the video from a pill camera as it wends its way through the oesophagus, the stomach and beyond. Massage chairs programmed to replicate the feelings of digestion enhance the experience, while a voice in your headphones guide you through the gruesome trip.

Next door is the Choco-Phonic – a series of four soundproof booths where visitors eat the same chocolate listening to different evocative soundscapes and see what it does to the taste.

“I was absolutely sceptical,” said Erris de Stacpoole coming out of the last chamber. She said the chocolate tasted particularly bitter when she listened to the soundscape of a school. “I don’t know what that means,’” she laughed.

De Stacpoole, like the other visitors, ticked boxes on a card noting the difference in sweetness and creaminess according to what they heard. The museum will analyse the results to see if there’s a pattern.

“I think there must be some science involved,” de Stacpoole said.

Upstairs a selection of Bompas and Parr’s British menu archive is on display.

Particularly fascinating: a 1944 Christmas Day menu by British prisoners of war at Stalug Luft III, the camp that inspired the film “The Great Escape.” The carefully printed menu made by and for the 12 prisoners includes barley porridge for breakfast, cold ham for lunch and a six-course dinner with carrots, roast potatoes and turkey. The cover with hand-drawn holly says: “Christmas 1944. The Last (?) at Sagan.”

There’s a 2014 menu from the British prison system which includes chicken leg salad for lunch and liver in a onion gravy. [sic]

“Historically food was enormously important,” Parr explained, adding that putting on a meal and inviting friends and influencers around was often used to further one’s status.

“Today whilst we use Instagram as a medium in sharing our food experiences to curry favour with our friends and appear to be cool, in the past they did it in very different ways: they would put on elaborate feasts,” said Parr as we spoke at the top of the museum’s grand, red-carpeted staircase.

The final room is stiflingly hot, humid and stuffed with butterflies, the under-valued pollinator. The insects are there to make a point about global food security: without environments where butterflies prosper there’s no pollination, no plants and no fruits and vegetables to eat.

The museum will be open for three months and visitors are asked for feedback on what they’d like to see in a permanent space.

“What we want to do with this museum is to curate experiences that are so compelling for people that immediately they want to tell their friends and family about what they’ve experienced and then start a conversation with everyone and make people really think again about food that they eat,” Parr said.

The enthusiasm of Bompas and Parr for food can’t be contained. Their ambitions include a larger space with room for a café – because one can’t live on chocolate alone, even if the taste changes with what you’re hearing. 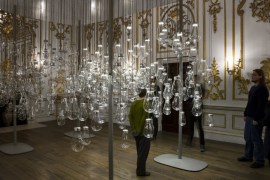 London Design Festival bigger than ever

Festival has more than 400 installations and events and more international designers than ever before. 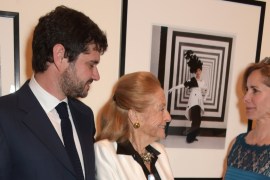 More than 80 photos of the icon assembled at a London exhibit drawing curiosity from the young and old.