Ressano Garcia, Mozambique – As the sun dips behind the giant brown hills that separate South Africa and Mozambique, a slim young man is busy doing final mechanical checks on a Toyota Land Cruiser at a house that clings to the side of the mountain.

Wearing a white polo shirt, track suit and dark sunglasses, Eduardo is a well-known human trafficker in the town of Ressano Garcia, a sleepy border crossing 97km away from the capital, Maputo.

A newly married father of one, Eduardo said he joined this illicit trade not to make money, but to answer God’s call. He sees himself as doing a job that heads of states and the international community should be doing – moving people in danger to safer, more prosperous surroundings.

“I feel not good when I hear what happened to them in their countries,” Eduardo told Al Jazeera, requesting his full identity not to be disclosed for fear of arrest. “I help them because I know they are suffering in their countries. They then move to other countries because here in Mozambique, even we don’t have jobs.”

In a town where most young men his age are unemployed, Eduardo sees his business not just as rescuing refugees, but also providing job opportunities to many people who otherwise might have turned to violent crime to make a living.

Deeply religious, Eduardo said he has been people-smuggling for the last three years and the job itself satisfies him immensely. “I know God will reward me for helping them. I’m waiting for that, something from God.”

Jobless and living with his family three years ago, Eduardo now has two vehicles parked in his newly finished two-bedroom house that sports fresh green paint and has exotic flowers growing in its garden.

“I have got a better life because of this job. I feel good because I’m doing something good,” he said.

Mozambique, a former Portuguese colony of some 25 million people, has one of the fastest growing economies in the world but almost all the refugees and migrants are headed to South Africa, the second-biggest economy in the continent.

With large numbers from Sub-Saharan Africa finding the Mediterranean route too expensive and dangerous, South Africa has become an attractive and easier option. Hundreds seeking a better life across the border pass through this town every month.

During the day, refugees stay out of sight fearing police arrests. But as the sun sets and vehicle traffic on the town’s only tarmac road dwindles, they venture out of safe houses – under the watchful eye of their smugglers – to try their luck at the wire fence that separates the two southern African countries.

In one of the many refugee hideouts in this part of Mozambique are three men who have travelled by road and boat for more than two months, managing to cross three international borders. They paid $250 each to Eduardo to take them across the border into South Africa.

Penniless and visibly exhausted as they waited to complete the last leg of a journey that started in the south-central Somali town of Beletweyne, the men didn’t have many nice things to say about the people who got them here.

“For a $5 taxi fare they charged each one of us $20. When we asked them for food and told them we had no money left, they told us to exchange our shirts for cup of tea. They are not good people. They guard us with machetes,” Elmi Yusuf Mohamed told Al Jazeera in a cramped hotel room with one bed that he shared with the two others.

“I have lost more than half my body weight because you give them money to buy you food and they just take the money. If you ask them they threatened you. Even though we paid them thousands of dollars they don’t give us food or treat us like humans,” Kulmiye said, his shirt soaked in sweat.

These are accusations Eduardo denied, saying he has never harmed anyone. “I’m a man of God. I never hurt anyone. I help them go somewhere better and safer,” he said.

For the refugees passing through Mozambique, unscrupulous human traffickers are not the only worry they face.

Security forces are a major threat to their passage, and Maputo has started a crackdown on undocumented foreigners.

“We caught 280 illegal migrants since the start of this month,” Inacio Dina, spokesman for Mozambique’s interior ministry, told Al Jazeera. “We repatriated them to the countries of their origin. We will continue catching and deporting them until there are no more illegal people in our country.”

Dina added the authorities are also hunting for the human traffickers. “In relation to traffickers and those involved in that illegal trade, our police force are working hard to detect them and they will be brought before the law.”

As the world’s attention focuses on the Mediterranean Sea and the refugee crisis in Europe, both traffickers and refugees in Mozambique agreed more needs to be done to help their situation.

“People with power, presidents and leaders, need to help them. Their problems are bigger than we can fix. We can only do a small thing for them,” Eduardo said. 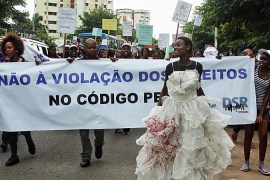 Colonial era law allows rapists to go unpunished if they marry their victims and stay married for at least five years. 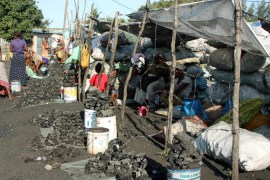