Toronto, Canada – While taxes, foreign policy, and cuts to the national broadcaster have been thoroughly debated ahead of Monday’s parliamentary election, it’s the veil that has Canadians most divided.

The niqab debate has been front and centre during the second-longest election campaign in Canadian history, as the ruling Conservative Party – led by Prime Minister Stephen Harper – has taken steps to prevent women from wearing it while taking the citizenship oath.

“It’s a wedge issue that has been put right in front because it’s a political vote-getter, but it has divided the Canadians incredibly; and, in fact, [the Conservatives] have had the adverse effect as opposed to the desired effect,” Professor Ratna Omidvar from Ryerson University told Al Jazeera.

The Conservatives have also promised to start a phone “tip line” so Canadians can report to police “barbaric cultural practises”, with proponents highlighting examples, such as forced marriages of young girls and “honour killings“.

While it is still unclear if the niqab issue will negatively affect Harper’s re-election bid, it has Canadians discussing whether the veil is a women’s rights issue or one of freedom of religion.

Liesl Gerntholtz, executive director of the women’s rights division at Human Rights Watch, told Al Jazeera the state has no business imposing rules on any form of religious dress because that violates freedom of religion.

“There are many religious practises that people are concerned about,” Gerntholtz said, citing male circumcision among Jewish and Muslim families as one example.

“I think that the issue of the headscarf or the niqab is particularly contentious and has an element of Islamophobia … I think we have to look at the disproportionate focus on the veil and the hijab because it is from Islam.”

The debate over cultural practises is not the first one of its kind in Canada’s multicultural society. A Sikh police officer in the 1990s fought to be permitted to wear his turban as a member of the Royal Canadian Mounted Police.

The debate around the veil, however, has engaged a more mainstream Canadian population with provincial and federal bills being put forth.

In June this year, the Quebec provincial government made a second attempt to introduce legislation on religious neutrality to prevent women from having their faces covered while providing or receiving government services.

In a recent interview, Harper said his party will follow Quebec’s lead at a national level.

“I believe the Quebec government has been handling this very controversial issue in a very responsible manner,” Harper said. “And we will do exactly the same thing in Ottawa.”

It was Toronto resident Zunera Ishaq who challenged the 2011 niqab ban introduced by then-Immigration Minister Jason Kenny. Ishaq demanded that she be allowed to wear the veil in public while taking the oath, but agreed to remove it in private to prove her identity.

In February this year, a federal court ruled in her favour, but the Harper government has appealed the ruling. Only six women have made the request to keep their niqab on during the oath-taking ceremony.

“If your reason to do this is to support women’s rights than banning the headscarf is probably the worst possible response,” Gerntholtz said of the government’s move.

“Freedom of religion protects your right to hold and manifest a religious belief … Stephen Harper is taking a constitutional freedom-of-religion issue and turning it into a political issue for his own narrow political partisan purposes,” said Virani.

A constitutional lawyer by profession, Virani said the issue is simply about individual rights. He also pointed out that Harper said at a recent debate that, as a father, he would never tell his daughter what to wear.

“He’s missing the point that women in this country choose what they wear, and he’s presuming that this is somehow being imposed on them … He’s limited the constitutional rights of individuals of a certain faith.”

Omidvar said the challenge for Harper ahead of Monday’s election is that he played to his own conservative base, but that base is not growing.

In the latest polls, Justin Trudeau’s Liberals were ahead of the Conservatives, with Tom Mulcair’s New Democratic Party in third place.

Virani said the policies over the last four years of Harper’s government pushed him to run as a Liberal candidate. Critics say the Conservatives have besmirched Canada’s erstwhile peace-loving reputation internationally, dropped efforts to tackle climate change, and pushed through contentious anti-terrorism laws.

While the Canadian electorate may be divided over the veil issue, the courts have stayed true to the constitutional challenge, said Omidvar.

Raheel Raza, a Canadian activist and writer originally from Pakistan, wrote recently that the niqab should be banned entirely in public – not just for oath-taking ceremonies or government interactions.

In a Huffington Post Canada opinion piece, she said the veil has nothing to do with Islam but represents the politics of the Islamic right, espoused by such groups as ISIL and al-Qaeda.

“The next government must legislate the complete ban on wearing face masks in public, not just to expose the hypocrisy of the Islamists, but for the sake of our security as well,” Raza said.

Joy Victoria Yonan-Renold, a 31-year-old strength and nutrition coach, told Al Jazeera she’s wary of overt religious practises having grown up in a Christian fundamentalist commune.

“I know how hard it is to change deep-seated religious beliefs unless it can be discussed, examined, and challenged honestly,” she said, though unlike Raza, she is unconvinced of the need for a niqab ban.

“I don’t think requiring women to remove a style of dressing forcefully will contribute to actual change … and promoting it politically seems to be a band-aid issue to jump on that only reinforces the gulf of beliefs between both sides that allows them to avoid the much more difficult questions.” 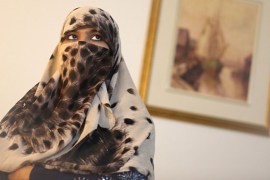 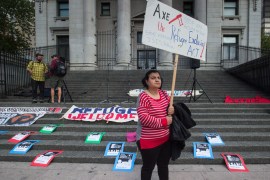