As the student cafeteria at Birzeit University empties after the lunchtime rush, Ehab Iwidat leans back on his chair and sips from a bottle of mineral water. The wiry, 20-year-old business and French student is suffering from a cold, but that has not stopped him from attending some of the recent demonstrations in the West Bank.

“It’s the first time in a long time that we’ve seen this,” he says. “I’ve seen young people, old people, females, males, protesting in the streets together. You can see rich people alongside poor people too.”

Like many in the so-called Oslo generation of Palestinians, who have little or no memory of previous Intifadas in Palestine, Iwidat only knows life under occupation as a second-class citizen.

He believes that Israeli restrictions on Palestinian freedom and rights in the West Bank, harassment from Israeli settlers, and the bleak prospects for a peace deal between the Israeli and Palestinian leaders have pushed Palestinians into the streets in recent weeks.

“It’s coming from the actions of settlers, who represent Israeli government policy. From burning people alive, humiliating people on a daily basis and restricting Palestinians’ freedom movement, to the disrespectful actions at al-Aqsa Mosque.”

The protests that have swept Jerusalem, Gaza and the West Bank this month have seen tens of thousands of Palestinians take to the streets. Men and women of all ages have joined the movement. In some cases, these massive demonstrations have passed peacefully, as protesters massed to chant slogans in unity, demanding solidarity to fight the Israeli military occupation.

The movement has even given traction to the idea that Palestinians could be on the verge of a new Intifada, or that one may have already begun.

Tuesday was declared a “Day of Rage” in Gaza and the West Bank, as thousands of Palestinians protested in refugee camps and at military checkpoints, singing anti-occupation songs and waving Palestinian flags.

Palestinian citizens of Israel simultaneously took to the streets for a general strike, closing businesses and schools across the country, while tens of thousands gathered for a peaceful rally in Sakhnin, chanting slogans against the Israeli government.

On Wednesday, thousands more attended the funeral of Mutaz Zawahreh, a 27-year-old from the Duheisha refugee camp close to Bethlehem, who was killed in the previous day’s clashes with the Israeli military. The protesters again chanted for solidarity and unity to battle Israel’s occupation of the West Bank. 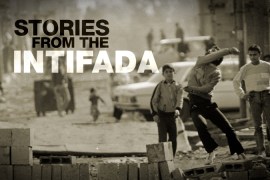 Stories From the Intifada

A look at the 1987-1993 Palestinian uprising, or First Intifada, through the eyes of those who lived through it.

Is a third Palestinian Intifada imminent?

Further violence in Palestinian territories and Israel raises fears of a new uprising.