Kuala Lumpur, Malaysia – An urgent debate in parliament is being demanded to find out why seven indigenous Orang Asli children went missing for weeks in the jungles of northern Malaysia – with five later found dead a kilometre away from their residential school.

The children – aged between seven and 11-years old – disappeared at the end of August after fleeing their boarding school. The six girls and one boy were reportedly afraid of being punished after older siblings had been beaten by a teacher for swimming in a nearby river.

Despite extensive search-and-rescue operations, the children remained unaccounted for until early October, 47 days later, when the decomposed body of one was found just 500 metres from their living quarters. Two surviving children were discovered a few days later, emaciated and close to death. The remaining children also died.

All were Orang Asli, who some human rights groups say are the most marginalised of Malaysia’s multi-ethnic population

“What punishments have been meted out to teachers and education department officials who – by their negligence, indifference and callousness – have disgraced their profession and the trust the kids and parents placed on them,” opposition parliamentarian Lim Kit Siang asked.

Colin Nicholas from the Center for Orang Asli Concerns, a lobby group for Malaysia’s indigenous people, said rather than being “lost” the children were deliberately hiding from the people trying to locate them, fearing they’d be punished.

“After the first child died, it only compounded their fear,” said Nicholas. “When rescuers tried to help the children, they tried to get away, and they had to be coaxed back.”

Nicholas told Al Jazeera there was a history of abuse at the residential school by teachers of students, which had contributed to the atmosphere of mistrust.

While authorities wait to get more details from the two survivors, politicians are set to call for an emergency debate on the tragedy when parliament reconvenes on Monday after the summer break.

Questions remain over how the search for the children was conducted, and if conditions and staffing at the boarding school were adequate.

The Human Rights Commission of Malaysia said many Orang Asli children are illiterate because of a lack of primary schools and teachers in their areas.

“The commission also continues to receive complaints of abuse by teachers [at boarding schools] and is appalled by the actions of teachers who abuse, bully and/or mistreat Orang Asli children in their care,” it said.

The government’s department for rural and regional development has since proposed a new transport system for the country’s 16,000 Orang Asli schoolchildren to allow them to return home from residential schools every two weeks.

But this was derided by Lim Kit Siang as a “laughable and grossly inadequate” response to the tragedy. 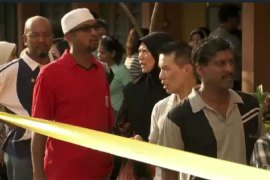 Najib Razak, who was re-elected in May, is being accused of bias towards the Malay majority. 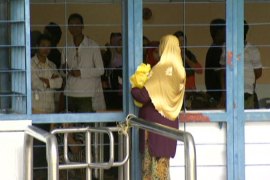 Escaping violence in Myanmar, many migrants fear for those they left behind.