United Nations – A 15-month probe will come to an end on Tuesday when Dutch investigators release a final report into Malaysia Airlines Flight MH17 that will be pored over for signs that the plane was shot down by Russian-backed Ukrainian rebels.

The Dutch Safety Board will issue its account of the crash, which will also assess whether commercial airlines should have been flying over the warzone and if passengers were conscious as the plane went down over eastern Ukraine in July 2014.

Wim van der Weegen, a spokesman for the board, told Al Jazeera the inspectors were “not interested in liability or blame”, and will not point fingers at Ukrainian rebels or anyone else. Nevertheless, the findings could be used in a separate, criminal probe, he said.

Ukraine and many Western countries say Moscow-backed rebels in eastern Ukraine mistook the Boeing 777 for a Ukrainian military aircraft and shot it down with a Russian-made Buk missile system, killing all 298 passengers on board. Moscow and the rebels deny this.

RELATED: Flight MH17: Will mystery ever be solved?

MH17 was travelling from Amsterdam to Kuala Lumpur on July 17, 2014, when it disappeared from radar at 13:20 GMT while cruising over rebel-held Donetsk in eastern Ukraine, about 50km from the Russia-Ukraine border.

In its preliminary report in September 2014, the board said MH17 broke up in midair after being hit by “numerous objects” that “pierced the plane at high velocity”. Nothing indicated technical or human error.

Crash site footage shows the plane broke up over a wide area, scattering the bodies of passengers, two-thirds of whom were Dutch, but also Malaysians, Australians, Indonesians, Britons and others.

Intercepted calls have bolstered claims that pro-Russian rebels were to blame. Bellingcat, an investigative website, and others have produced photos and other evidence indicating that a mobile Buk system crossed the Russian border and may have shot down MH17.

Tjibbe Joustra, chairman of the safety board, will use a reconstruction of the plane’s cockpit and business section to explain what investigators now know about the crash. This could include confirming the type of missile used.

Since its preliminary report, the board revealed in August 2015 that it may have found parts of a Russian missile system at the crash site.

Joustra’s 30-minute presentation will also address commercial airlines flying over warzones. A no-fly zone was in place up to 9,754m over the region, but MH17 was flying above that altitude at 10,058m. Some major airlines continued flying in the vicinity; others had re-routed.

The presentation will also assess whether “passengers were aware of what happened just before and during the crash”, and why some Dutch families had to wait several days before getting confirmation from officials that their loved ones were on board, said Weegen.

RELATED: Calls grow to prosecute those who shot down MH17

The report only aims to “draw lessons to prevent similar accidents in the future”, added Weegen.

Attributing blame is the job of the Joint Investigation Team (JIT) – a Dutch-led unit that also includes Ukraine, Belgium, Malaysia and Australia.

“We will not only establish the cause of the crash but also try to trace and prosecute persons who were responsible,” Bruin told Al Jazeera, adding it is not likely to be complete until the end of 2015 or early 2016.

Despite two probes, it is unclear whether anybody will end up in the dock. In July, Russia used its UN Security Council veto to block a draft resolution to set up an international tribunal for the disaster.

JIT states met at last month’s UN General Assembly to discuss plans for an alternate court, but “there was no clear conclusion or result”, a Western diplomat told Al Jazeera, speaking on the condition that he was not named.

Russia denies claims that it supplied arms to the rebels and has instead suggested a Ukrainian military aircraft flew within firing range of the airliner just before it came down. Russian media has been rife with alternate theories.

Nicolai Petro, a Russia and Ukraine analyst at the University of Rhode Island , said Western politicians were too quick to blame pro-Russian rebels and “tainted the investigative process by assigning responsibility before any evidence from the crash site had been gathered”.

The United States and Ukraine have been unhelpful about releasing data about the crash, and key questions about the event remain unanswered, including “eyewitness reports of military planes in the vicinity”, he told Al Jazeera.

“The official report’s findings will probably be no less politically contested than the debate to date has been,” he added.

The downing of MH17 was a milestone in the conflict in Ukraine, where 8,000 people were killed, and 18,000 more were wounded. It triggered more sanctions against Russia from the West, which accuses Moscow of driving the rebellion there. The Kremlin denies this.

Dmitry Babich, an analyst for Russian state media, said it “is hard to expect Western investigators to be objective”, and warned against using the report to support Kiev’s tough line against separatists.

“Whatever the result of the investigation, it would be unfair to lay the blame for this on the ordinary people of southeastern Ukraine, who have been starving and dying these past two years,” Babich told Al Jazeera.

“The Western media needs to understand this.”

Sir Jeremy Greenstock, a former UK ambassador, disagreed. Evidence in the report will impact whether the West maintains sanctions and will make Moscow think twice before sending more weapons to eastern Ukraine’s separatists, he said.

“It’s going to expose what’s going on, a lack of transparency and straightforward lying, which I think will help cleanse the situation,” said Greenstock, adding it could help Kiev restore stability and democracy to eastern Ukraine.

“It will lower Russian credibility and reduce Russia’s image globally. It’s all very well being clever, shrill and powerful at particular moments, but you’ve got to see where the long-term trends are going, and they’re not in Russia’s favour,” he told Al Jazeera. 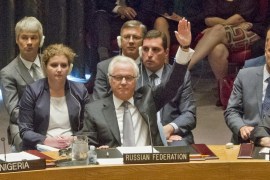 Moscow votes against international body to prosecute those who shot down passenger jet over eastern Ukraine. 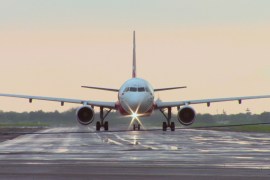 How Safe are Asia’s Airlines?

101 East investigates if Asia’s budget airlines are sacrificing safety as competition for passengers heats up. 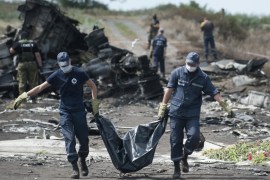 Calls grow to prosecute those who shot down MH17

UK foreign secretary calls for UN-backed tribunal as services are held to remember 298 killed in Ukraine a year ago.