Minsk, Belarus – Belarussians voted on Sunday in elections that most predict will be won by President Alexander Lukashenko, a hardline leader who has governed the country for the past 20 years.

Bright red-and-green posters advertising the elections are omnipresent in the capital, but the mood on the street is largely apathetic.

Violent protests marked Lukashenko’s controversial re-election in 2010, which ended with the imprisonment of opposition leaders for years.

This time around, many in Minsk were reluctant to voice their political opinions, fearing punitive responses from the government.

“I’m not going to participate in these elections because I consider them to be completely fake. The last 20 years [under Lukashenko] have been very bad. We have a dictatorship in Belarus that paralyses all political activity and almost all economic activity in this country.

“This has been the quietest election period because nobody even has any hope the elections will finish with any other outcome than Lukashenko being re-elected.

“We are at a point of departure at the moment in Belarus. Change will come in the coming years, but those changes will not depend on us – they will depend on what happens in Russia.”

“I don’t like any of the candidates. The political atmosphere in Belarus is generally negative. People don’t believe that the electoral process is legitimate or transparent.

“I’m not going to participate in the elections. I don’t believe that any candidate other than President Lukashenko will be given the opportunity to win.

“I like what Tatiana Korotkevich [of the Speak the Truth party] says. She advocates what everyone wants, including democracy. But her reputation has been damaged since rumours began circulating that she has connections with the KGB, so I can’t believe any of the candidates.

“Most people don’t want to go to the elections. Most people are tired of the political circus we have had over the years. People are disappointed with the opposition candidates too. No one seems to be a real leader. I think these are the most unpopular elections Belarus has ever seen.

“You see that we are under Russia’s influence with Putin’s plans to build a Russian airbase in Belarus.

“I hope that someday Europe will help us. Our president is always shifting sides towards Europe and Russia, and this game has been played for almost the last 15 years.”

“I will vote for the President Alexander Grigoryevich [Lukashenko] because I like everything about him – his politics, his attitude towards Belarussian people, towards economics. He’s a strong leader.

“I think the political environment in Belarus at the moment is positive, and I think our country will continue to be strong into the future and under Lukashenko’s presidency.

“In Belarus, we consider the Russian president to be our friend, everyone in Belarus likes Putin and Russia because it is our neighbour. Belarussians have a lot of relatives in Russia, and the ties between the two countries are strong.

“But that doesn’t necessarily mean I’m against Europe or the European Union.”

“I don’t want to vote. I can say that people in our country don’t believe that these elections change anything, and everyone already knows who the next president will be.

“Of course I want to see a European – not Russian – Belarus. And this is the next problem. Many people think that we are more Russian than we are Belarussian people. Many people believe that Russia is their native country, more than Belarus.

“I know that many young people are leaving Belarus at the moment, but I want to stay here. My boyfriend and I are living here and we want to do something to change the situation from here, rather than somewhere else.”

“I’ll vote for Lukashenko because the other candidates don’t represent my views; they aren’t viable alternatives in my opinion.

“I think stability is the most important thing.

“Belarus has to work in order to make a good place in the world. Whether we look towards Europe or Russia is an important question. Belarus depends on many other countries for its economy.

“But I don’t think it’s especially pertinent whether, in the future, Belarus with align itself increasingly with Russia or the European Union.

“I think the main thing is for Belarus to develop economically and to manufacture products or services needed by Russia and European countries. This is the main thing.

“People have to work harder if they want to have a better life. The future of Belarus is positive.”

“To be honest, I don’t want anything to change in our country right now. I like the situation in Belarus as it is. In every country, there are advantages and disadvantages, but I have everything I need here now. If I want to change something, I will – maybe some years later; but right now, I’m happy here.

“My family is from Uzbekistan, and there is corruption there. There is no such corruption here.

“I like that our president gives us the opportunity to study if we want. I can study for free here, and, of course, one of the most important things is that medicine is free in Belarus.

“I want our country to be separate from Russia and Europe. Not only me, but I think everyone wants us to be free, to have freedom.”

“For me, that means speaking the Belarussian language, participating in social activities, and volunteering for organisations that promote Belarussian identity and strength.”

Jimmy Hutcheon contributed to this report. 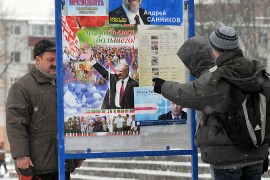 Opposition candidates and supporters say the unfair campaign for Sunday’s election is not genuinely democratic. 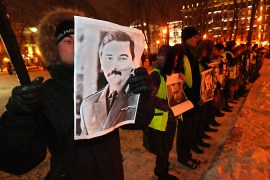