New York, United States – Toussaint Werner made it to the other side of the expressway.

He grew up in the ganglands of Englewood, a mostly black area of Chicago. But he worked hard in college and now runs a business and raises his family on the other side of the I-94 highway, a safer suburb a few blocks from US President Barack Obama’s home in the city.

In many ways, Werner embodies the spirit of the Million Man March, the rally he attended with his father on a fresh October morning in 1995: that black men should be pillars of their communities, rather than victims of gangs, drugs or poverty.

“It was about empowerment, becoming your own man and supporting your community first,” Werner, 39, a self-employed designer, told Al Jazeera.

A photo taken by his father, Eric, shows the 19-year-old Werner, head bowed, holding hands and praying with fellow protesters. Attendees describe a multi-faith crowd of rich and poor alike talking, hugging and laughing in the National Mall.

They heard speeches from former presidential aspirant Jesse Jackson, writer Maya Angelou, and the activist Rosa Parks, who famously broke segregation-era rules by not giving up her bus seat to a white man in Alabama in 1955.

“There was a moment in that day when I started crying,” the father-of-two said.

“It was so damn beautiful to see so many black men. It was a feeling of love that overtook me.”

Getting out of Englewood was tough for Werner. The suburb still has one of Chicago’s highest violent crime rates and is marred by the law-breaking and weak social structures that activists say trap blacks in a cycle of poverty.

“I grew up on the wrong side of the expressway, for sure,” said Werner, who thanks the large, supportive family that his single-parent friends did not have. “I was the exception, not the rule. Of a dozen boys, I was the only one with a father.”

Keeping the tradition alive, Werner will repeat his father-and-son odyssey by taking his 10-year-old boy, Eric, on the 1,000km drive to Washington for the 20th anniversary of the protest, called Justice or Else, on Saturday.

RELATED: Race in the US: America’s most persecuted?

This time, the rally organiser, Louis Farrakhan – the charismatic, firebrand leader of the Nation of Islam, of which Malcolm X was a member – has invited women, Latinos and Native Americans along in a bid to broaden the event’s reach.

It may have started badly. This week, local police warned in an internal memo that Saturday’s protest “may not be as peaceful” as the one in 1995 because Farrakhan “has been accused of inciting violence against both Caucasians and police officers”.

It is also expected to attract counter-rallies of smaller numbers of anti-Muslim protesters. Mosques and Islamic centres in Washington are planning extra security over the weekend amid fears that some right-wingers will bring guns.

Benjamin Chavis Muhammad, who directed the 1995 march and is involved this time, told Al Jazeera that organisers have an “excellent track record” in hosting peaceful meets and the event would not be spoiled by anti-Islamic “publicity seekers”.

“The last gathering had a tremendous, positive impact on the African-American community,” said Muhammad, who cut his teeth alongside Martin Luther King and gained renown as leader of the Wilmington Ten, a group of wrongfully-jailed activists.

“We increased voter registration that year, over one million new African Americans had registered to vote. The crime rate inside the black community went down after the Million Man March.”

He would not predict how many people would come on Saturday. The 1995 event got mired in a row over whether it had lived up to its name, with crowd size estimates ranging from 400,000 to more than 1.1 million people.

RELATED: Race through the lens

The US has been shaken by a wave of anti-racism rallies in recent months.

“From Rodney King to Mike Brown, we’re still facing the same issues with black men and police brutality,” she told Al Jazeera. “The black community has fallen further down the rabbit hole these past 20 years in terms of our economic, social and political existence.”

Data support her claims. According to Pew Research Center, blacks are less financially secure than whites, go to worse schools, and are less likely to own a home. The black poverty rate has fallen, from 31.3 percent in 1976 to 27.2 percent in 2014, but they still lag behind other groups.

Incarceration rates tell another story. Blacks are jailed at nearly six times the rate of whites, according to the National Association for the Advancement of Colored People, a rights group. On any given day, more blacks in their late 20s will be in prison than at work.

This needs to change, says Farrakhan, and money is a way out. Blacks control as much as $1.5 trillion of the national $18 trillion economy and can progress by boycotting white-owned stores and backing black-owned firms and social projects, he said.

In his books, PowerNomics and Black Labor, White Wealth, the economist Claud Anderson said blacks can escape from the underclass via his five-year industrial plan of opening their own firms and controlling commerce.

Werner agrees in principal, but struggles to buy black-owned brands in a market dominated by Walmart, Costco, Amazon.com and other giants. “Every time I swipe my credit card, that money goes away from my community,” he said.

Activists have criticised Farrakhan for trying to further divide black and white Americans. Younger activists, including the Boston-based campaigner Khury Petersen-Smith, question whether such plans are viable.

“Black people spend a lot of money, but that doesn’t mean there are many black businesses to shop at,” Petersen-Smith told Al Jazeera. “With black wealth at a historic low, we need to look at places besides our spending where we have power.”

Organisers say at least half of Saturday’s crowd will be teens and young adults. This could be the big test for the revived Million Man March – die-hard fans such as Werner will show up, but will it resonate with blacks of the millennial generation?

“The Million Man March was a huge event in the 1990s,” said Petersen-Smith, 33. “We will see if the spirit of Ferguson and the Black Lives Matter movement can find itself in Washington DC this weekend.” 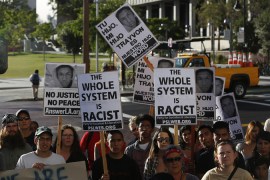 The challenges of talking about race

It’s only by talking openly about race that its ill effects, stereotypes, and assumptions will eventually go away.