Minsk, Belarus – Belarussians headed to the polls on Sunday in elections many predict will see strongman President Alexander Lukashenko easily re-elected to a fifth term.

Compared to the elections of December 2010 – which ended in the arrest of opposition leaders and political activists as widespread protests flared against what many called a rigged vote – this year’s campaigning has been fairly mundane.

Both Lukashenko’s supporters and those hoping for an end to the Belarussian president’s 20-year reign see him slated for five additional years in office. Non-government surveys have recorded an increase in Lukashenko’s ratings from 39 percent in July to 46 percent in September.

Under Lukashenko’s leadership, Belarus has been routinely referred to as the “last dictatorship in Europe”. The country’s civil and political rights record is among the poorest globally. Reporters Without Borders’ Press Freedom Index ranks Belarus 157 out of 180 countries.

Leaders of the political opposition say the country has the highest rate of intelligence and security personnel per civilian in Europe.

With continued unrest in neighbouring Ukraine and Russia’s close proximity, Lukashenko has earned the praise of his supporters here for maintaining stability.

The president won accolades at home and abroad for his perceived role as a peace-broker during the Ukraine conflict, said Francisak Viacorka, a Belarussian journalist and founder of Freedom Institute.

The Minsk Protocol of September 2014 and Minsk II agreement last February, which brought European Union, Russian, and Ukrainian leaders together in the capital, was a public relations success for Lukashenko, he said.

“Ukraine didn’t gain from the talks in Minsk. EU leaders didn’t benefit. But Lukashenko was able pose next to Merkel and Putin. It was a huge PR victory for him,” Viacorka told Al Jazeera.

Members of the opposition are calling on voters to ignore Sunday’s elections.

Nikolai Statkevich was a candidate against Lukashenko in the 2010 vote who was arrested after the results were announced. He was released from prison in August after serving five years of a six-year jail sentence.

Statkevich – one of seven presidential candidates imprisoned after the election – is among opposition leaders calling on voters to stay at home.

“For the first time, elections in Belarus do not have any representative from the opposition. There are only fake opposition candidates that create the atmosphere of presence of political opposition. And the purpose of this is to trick people into participation in the current elections,” Statkevich told Al Jazeera outside Minsk’s City Hall.

“Boycotting is neither the best nor the most effective way, but we are obliged to take it.”

In the days leading up to election, young voters who advocate political change in Belarus told Al Jazeera the decision they face on Sunday is not which candidate to vote for, but whether or not to follow opposition leaders’ boycott calls.

Candidate Tatyana Korotkevich, a new arrival on Belarus’ political stage, has gained momentum in the later stages of the campaign and has called for “peaceful change” in the landlocked Eastern European country of about 9.5 million people.

“We think that it would be the best if Lukashenko did not run in elections this year – best for the country, best for society,” Korotkevich told Al Jazeera at her office in Minsk. “What we’ve seen is that people are tired of his style of management that doesn’t offer anything for the future.”

According to a recent Independent Institute of Socio-Economic and Political Studies poll, Korotkevich’s ratings increased from two percent in June to 18 percent in September, putting her second after Lukashenka.

“Lukashenko’s regime actively simulates democracy, but at the same time they make conditions increasingly difficult for those who want to develop Belarus politically,” Korotkevich said.

Korotkevich, who has been criticised by some in the opposition camp, including Statkevich, of adding legitimacy to the elections by participating, described the campaign process as slanted in favour of the president.

“Candidates don’t have equal conditions for participating in these elections. Throughout the entire campaign, I have had two hours on national TV granted to me by the state. President Lukashenko appears on national TV constantly, before during and after the elections.”

Since elections in 2010, Belarus’ political opposition has encouraged a resurgence of national symbols – art, language, and culture – as a means of confronting Russian expansionism in the region.

“Only 13 percent of Belarussians speak our language, we should speak Belarussian to oppose Russian expansionism in the region,” said Zmicer Dashkevich, co-chair of the unregistered youth opposition movement the Young Front.

Dashkevich challenged oppostion factions for not taking to the streets ahead of the election.

“Forget completely about the elections. Every opposition activist needs to ask what they need to do individually and what we, the opposition, needs to do collectively for the country.”

President Lukashenko recently appeased a recent surge in national identity by incorporating national colours and symbols on his election posters that promise an “independent Belarus” – a slogan that has replaced his traditional election motto “stability”.

Lukashenko also announced on Tuesday plans for a Russian airbase in Belarus wouldn’t come to fruition, after discussions had been under way for two years.

“We don’t need a [Russian] base now,” Lukashenko said. “We have wonderful pilots, we have a good school for military and civilian pilots. Why would we create a base? Why would I bring here planes and pilots from other states? What would ours do?” 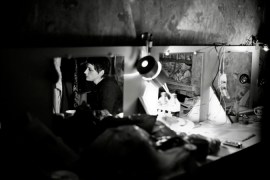 Censorship and suppression in Belarus

Actors and musicians are battling state restrictions to tell the stories of people in ‘Europe’s last dictatorship’. 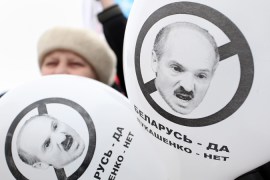 An insight into the recent history of Belarus and the growing movement for change in ‘Europe’s last dictatorship’.