For Palestinian television correspondent Muhammad Sayyad, 27, attacks by Israeli police officers and soldiers are a routine part of the job.

“This isn’t new for us, but the violence [against journalists] has increased lately,” Sayyad, who works for the local Ma’an News Agency, told Al Jazeera.

“It has gotten a lot worse here since problems became more frequent at the al-Aqsa Mosque compound in occupied East Jerusalem.”

The Palestinian Centre for Media Freedom and Development (MADA) has documented seven press violations committed by Israeli forces since the beginning of the month.

“Some have been deliberately beaten by soldiers, some were shot and others were [injured] while covering the clashes when the soldiers fired [stun grenades and gas bombs] indiscriminately.”

Clashes between Israeli military forces and Palestinian demonstrators have engulfed much of the occupied West Bank, including East Jerusalem, since the killing of two Israeli settlers near Nablus last Thursday.Israeli settlers have also increased attackson Palestinian communities in recent days.

doesn’t want the media to cover the protests and show them to the world.”]

According to the Palestinian Red Crescent, more than 600 Palestinians have been injured as Israeli forces attack protesters with stun grenades, gas bombs, rubber-coated steel bullets and, in some cases, live ammunition. Journalists are no exception.

Sayyad was injured as a result of being beaten by Israeli security forces outside the compound last week. “We went there to cover the events,” he recalled, “but they wouldn’t actually allow us to go in the compound.”

“We were filming and doing interviews with the mourabitat,” he said, referring to a group of Palestinian women who have been banned by Israeli authorities from entering the al-Aqsa Mosque compound.

Although there were no clashes taking place at the time, heavily-armed police arrived and began to argue with the women, he said. “They were yelling, but then they started to hit the women. Two of them came over and attacked me… they started hitting me.”

“As they hit me, they were cursing at me and threatening me,” he added.

After being hit for between 10 and 15 minutes, Sayyad says, he was able to break free from the officers and get away without being arrested. Upon arriving home, he found that his back was badly bruised.

“I recognise the soldiers – they see us there all the time. I’m certain they know we are journalists,” he said. “We had our cameras and microphones only. There were no clashes at the time. There’s no reason to attack us.”

RELATED: Palestinian targeted by a ‘surge’ in settler violence

Explaining that there has been a “clear escalation of attacks against journalists,” Rimawi said that Israeli

forces target journalists in order to silence them.

“Israel doesn’t want them to report on Israeli attacks – including by the settlers – against Palestinians,” he said, “and [Israel] doesn’t want the media to cover the protests and show them to the world.”

Among those injured by Israeli forces in the last week was al-Mayadeen correspondent Hana Mahameed. While covering unrest in East Jerusalem on Sunday, Mahameed was shot in the face with a stun grenade as she reported live on television.

During video of the incident, Mahameed – who was wearing a flak jacket that identified her as press – is reporting as youth clash with Israeli soldiers. The sound of the stun grenade being fired is followed by it striking the reporter’s face who screamed as she fell to the ground.

Although she sustained severe burns across most of her face, Mahameed’s head was wrapped with bandages and she was back on air the same day.

Another journalist, Ahmad Hassan, was hospitalised last Friday after an Israeli soldier shot him in the leg with live ammunition while he covered protests in Kafr Qaddum, a town in the northern West Bank.

Major Arye Shalicar, an Israeli army spokesman, denied claims that security forces have intentionally targeted journalists. “If a journalist is in the middle of a violent demonstration with dozens or hundreds of rioters throwing rocks or molotov cocktails, it could be a little bit dangerous,” he told Al Jazeera.

Despite the army spokesman’s comments, watchdog groups regularly criticise Israel for directly and

indirectly targeting journalists and other press workers – both Palestinians and, to a lesser extent, foreign media.

In its annual report, the Gaza Centre for Press Freedom said 2014 was the “bloodiest year” for Palestinian media workers in history. In addition to the 16 media workers killed by Israeli forces during the 51-day war in Gaza last summer, the group documented at least 295 press violations.

But it is not just Palestinian groups that have spoken out on Israel’s lengthy record of press violations.The occupied Palestinian territory ranked second on Reporters Without Borders’ 2014 list of deadliest countries for journalists.

Back in East Jerusalem, Sayyad said that Israeli forces often target press as a “scare tactic”.

“It’s not me who should ask why they beat us up,” he said. “They need to ask themselves why they’re scared of journalists doing their job.” 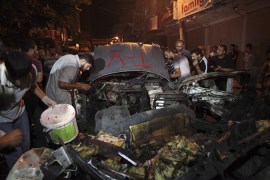 The death of Hamed Shehab on Wednesday in an Israeli air strike has triggered fear and anger among journalists in Gaza. 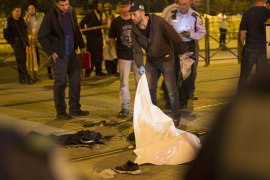