The demand for foreign-owned corporations to stop advertising in the Prothom Alo and Daily Star newspapers was allegedly given by officers from the Directorate General of Forces Intelligence (DGFI), following the August 16 publication of a story on the army’s killing of five men in the Chittagong Hill Tracts.

Later that day, army officials contacted both papers and criticised them for describing the dead men as “indigenous” people instead of “terrorists”, sources said on condition of anonymity for fear of reprisals.

Since then, Prothom Alo – the most widely read newspaper in the country with daily sales of more than 500,000 copies – has lost at least 35 percent of its advertising revenue, while its English-language sister paper Daily Star’s revenue has plummeted about 25 percent.

Ziauddin Adil, who runs media buyer company Top of Mind, estimated in the past month the two newspapers lost at least $1.2m in advertising revenue.

On the day the articles were published, Bangladeshi telecommunications firm Grameenphone received a call from an army officer working at DGFI, instructing it to stop advertising in the two newspapers, a source said.

The Norwegian company Telenor, which is the majority shareholder of Grameenphone, confirmed in a statement to Al Jazeera that “along with several other large corporations, [it] received an instruction from the authorities to stop advertisements in two leading newspapers in Bangladesh”.

Al Jazeera confirmed from several corporate sources – who requested anonymity because of the issue’s sensitivity – that Bangladesh’s three other major foreign-owned mobile phone companies – Robi Axiata, Banglalink and Airtel – along with consumer goods multinational Unilever also received and complied with the instruction.

Mahfuz Anam, editor of the Daily Star, acknowledged that major companies had suddenly stopped advertising with the paper, but he declined to respond when asked the reason why.

“We are noticing an unusual drop in our advertisements,” he said. “This is totally unprecedented and not happening due to any market condition, nor any change in policy on the part of the advertisers. We are surprised, and we are looking at the possible reasons.”

DGFI operates under the authority of the ministry of defence, which is headed by Bangladeshi Prime Minister Sheikh Hasina. Bangladeshi law grants neither the government nor the army powers to intervene in companies’ advertising choices.

Mahbubul Hoque Shakil, a special assistant to Hasina, denied there was any such instruction. “This is a total lie. It is a blunt lie. [The government] believes in the freedom of speech and the freedom of media … There is no instruction, nothing.”

“DGFI is an organisation which works for the defence services: that is the army, navy and air force,” Shakil added. “They don’t have any other job to do with the common people or the media. They did not give any instruction so far as I know.”

He pointed out after the August 16 articles were published, Prime Minister Hasina’s sister had written an article for Prothom Alo. “If we are against [this paper] how could she do that?”

“There is no such instruction … as far as I know,” he said. “DGFI never gives such an instruction … We are just an organisation supporting law enforcement agencies, looking after the national interest. It is all just a rumour.”

However, one senior manager at Grameenphone told Al Jazeera on the condition he would not be identified: “The DGFI officer said that we could no longer advertise in either the Prothom Alo or the Daily Star, and that steps would be taken against us if we defied the order.”

The warning was verbal and not put in writing, he said.

Grameenphone was not told the reason for this. “We were only told that the order ‘comes from the top’,” the manager said.

Grameenphone had planned on launching a new campaign the following day, and so it immediately pulled the planned advertisement in Prothom Alo, he said.

Morshed Alam, executive director of media buyer Mindshare, confirmed on the evening of August 16 that Robi Axiata, Airtel, and Unilever asked his company not to buy any further advertisements in the two newspapers.

“We were informed by our clients that due to unavoidable circumstances, we should stop all advertisements in Prothom Alo and Daily Star,” Alam said. “We initially continued to advertise in the magazine supplements, but that was also stopped.”

Adil, the Top of Mind executive, said the country’s second-biggest mobile phone company, Banglalink, had told his company not to advertise in the two papers.

“Since the [August] 16th evening, this client has asked us not to plan advertisements in either Prothom Alo or the Daily Star,” he said.

Adil added: “Any advice of a media buyer would be to advertise in these two papers, in particular, Prothom Alo, as they are by far the market leaders”.

RELATED: Bangladesh: Politics, religion and the limits of free speech

So far, Telenor is the only company to confirm having received instructions to stop advertising in the papers.

Robi Axiata, a joint venture between a Japanese and Malaysian company, declined Al Jazeera’s request for comment, as did UK-Dutch-owned Unilever. A spokesperson for India-owned Airtel said claims the DGFI had ordered companies to stop advertising in the newspapers were “speculation – and I am afraid as policy – we don’t comment on speculation”.

Banglalink, which is owned by a Dutch company, denied its decision to stop advertising in the two newspapers had anything to do with government pressure.

Iftekharuzzaman is the executive director of Transparency International Bangladesh who goes by one name.

He noted enmity between the prime minister and the two newspapers goes back to the period of emergency government in Bangladesh between 2007 and 2009, when an army-controlled caretaker was in power.

“The papers were perceived to have supported the so-called ‘minus-two theory‘ of the military-backed caretaker regime, allegedly designed to replace Sheikh Hasina and Khaleda Zia as leaders of the Awami League and the Bangladesh Nationalist Party, respectively,” said Iftekharuzzaman. “It appears that the conspiracy theory has not been forgotten.”

More recently, the newspapers’ independent reporting on the ruling Awami League’s failure to hold free and fair elections, widespread administrative corruption, and the politicisation of governmental institutions has made it a thorn in the government’s side.

In March this year, Hasina accused the Daily Star of helping the Islamic “radical cause”.

A few days later her son Sajeeb Wajed, an adviser to the prime minister, wrote that “the Daily Star has written one false story after another”, and called for the paper’s editor to be arrested for “treason”.

Reporters from both the Daily Star and Prothom Alo have been barred from the prime minister’s events in recent months.

Akbar Ali Khan, a former secretary to the cabinet and a well-known civil society leader, said it was wrong for the government to “influence private companies in putting advertisements in newspapers” – if that were the case.

“The government has already been putting various kinds of pressure on the media in the past, and they will continue to do so in the future. It is a continuous slide downwards,” Khan said.

According to Iftekharuzzaman, companies know the government could make business impossible for them if they did not comply with the no-adverts instruction.

“In Bangladesh, politics is business and business is politics … These companies would fear repercussions and not want to antagonise the government,” Iftekharuzzaman said.

“I think it is a serious threat to freedom of media in Bangladesh.” 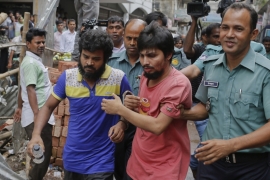