When right-wing Jewish demonstrators flooded Jerusalem’s historic Old City on Saturday night, Palestinian shop owners closed their stores and residents went into their homes and locked the doors, according to a 27-year-old resident, Mirna Ansari.

“They were shouting ‘Death to Arabs!’ and banging on our doors with sticks. There have been so many soldiers and settlers [in the area] for the last four days – even before the last attack,” she told Al Jazeera, referring to the fatal stabbing of two Israelis by a 19-year-old Palestinian in Jerusalem earlier on Saturday.

In a separate incident, Fadi Alloun, 19, was also shot and killed by Israeli police early on Sunday morning. Police allege that he had tried to stab an Israeli teenager – a claim his family rejects.

The settlers enjoy total impunity. Why should they be afraid when their government protects them and the international community sits quietly and watches?

Israeli settlers have been attacking Palestinians and vandalising their homes, vehicles, and agricultural land throughout the occupied West Bank, including East Jerusalem since the fatal shooting of two Israelis near Nablus last Thursday.

RELATED: Living in fear in Hebron

Ansari, who lives with her family in the Old City, explained that “settlers were roaming around and going into Muslim areas. It was frightening, and we knew it was very dangerous”.

Among those alleged to have been involved were hard-line settlers, such as activist Baruch Marzel, and ultra-nationalist groups like Lehava, which campaigns against romantic relationships between Arabs and Jews and often calls for Palestinians to be killed.

With the exception of residents of the Old City, police announced on Sunday morning that Palestinians were banned from entering the area for 48 hours.

The soaring tensions have led to widespread clashes between Palestinians and Israeli security forces, while settlers have carried out several attacks on Palestinian communities. More than half a million Israelis live in guarded, Jewish-only settlements across the West Bank and East Jerusalem.

According to the rights group Ahrar, settlers have carried out at least 126 attacks or acts of vandalism targeting Palestinians since Thursday. In addition to 25 physical attacks on Palestinians over the last five days, Ahrar has documented 35 instances of settlers vandalising homes and another 66 instances of smashing car windows.

On Monday morning, two Palestinians, including a 13-year-old boy, were hospitalised after settlers attacked them outside the al-Arroub refugee camp near Hebron, according to local media reports.

RELATED: The unrest in the Palestinian territories

Accompanied by soldiers, a group of settlers on Saturday raided the Nablus-area village of Burin, clashing with Palestinians and attacking at least three homes, according to Ma’an News Agency. The day before, settlers set ablaze dozens of Palestinian-owned olive trees.

Elsewhere in the West Bank, settlers have protested by blocking off highways and not allowing Palestinian motorists to pass. Asked whether soldiers prevented settlers from confronting Palestinians, an Israeli army spokesperson was unavailable to comment to Al Jazeera.

According to Tahseen Elayyan, a researcher at the Ramallah-based Al-Haq human rights organisation, settler attacks “are nothing new, but there is a surge in violence … and we don’t know where it will lead”.

Although Israel is required by international humanitarian law to protect Palestinians in occupied territory, Elayyan said soldiers often provide settlers with protection as they carry out attacks or acts of vandalism.

“Israeli settlers have always been protected by soldiers when they attack Palestinians. What is new here is that settlers have started giving [security forces] directions,” he told Al Jazeera, alluding to the video of a group of Israelis urging a police officer to shoot Alloun in Jerusalem.

“The settlers enjoy total impunity,” Elayyan said. “Why should they be afraid when their government protects them and the international community sits quietly and watches?”

In late July, an arson attack carried out by settlers in Duma, a central West Bank village, killed three members of the Dawabsheh family, including an 18-month-old boy. At least nine Israelis were arrested after the attack, but no one has been charged.

A November 2014 report published by Yesh Din, an Israeli rights group, paints a picture of widespread impunity for Israeli settlers suspected of violent crimes and acts of vandalism, as well as a consistent pattern of neglect by the Israeli police authorities assigned to investigate such allegations.

The report found that more than 85 percent of settler violence cases opened in the West Bank were closed “due to the [authorities’] failure to investigate properly”. Between 2005 and 2014, the report added that “a mere 7.4 percent of investigation files led to indictments of Israeli civilians suspected of attacking Palestinians and their property”.

The soaring tensions have led many to speculate that a third Intifada, or uprising, could break out.

Back in East Jerusalem, Palestinian schools have been closed since Sunday due to ongoing concerns about students’ safety as clashes increase in frequency between Palestinians and Israeli soldiers and settlers.

“We are scared to let my little brother go outside, especially at night,” Ansari said. “[Settlers] are angry, and they’re even more frightening than the soldiers.” 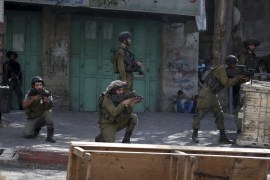 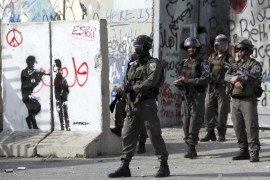 At least 10 wounded by Israeli fire in West Bank during raid by troops looking for gunmen who killed a settler couple.