St Regis Mohawk Reservation, US – Miss the roadside signs welcoming you to Akwesasne and it can be hard to know you’ve arrived – possibly in another country.

Snowy winter streets begin in the United States and end in Canada with few tangible hints of a borderline. Some properties are even split between the two countries, with a living room in New York and a kitchen in Quebec.

But the boundaries – international and internal, visible and invisible – that proliferate here matter. Centuries old, yet still contested, they shape the post-9/11 lives of Mohawk residents more than ever.

Straddling the US-Canada border, which slices through the eastern half of the reserve and continues west with the St Lawrence River, the territory encompasses about 66sq km of peninsulas, islands and wetlands.

The Native-American name Akwesasne, translates to “land where the partridge drums”. It could also be described as a jurisdictional Frankenstein – a complex array of entities make claim to portions of the reserve or responsibility for its nearly 23,000 people, who live in roughly equal numbers on either side.

“I never realised how complicated life is, how odd things are here when it comes to jurisdictions until I left,” said Brian David, one of 13 tribal chiefs on the Canadian portion.

Akwesasne has two sets of elected administrations governing the territory.

The St Regis Mohawk Tribal Council manages the American section, which abuts two counties of upstate New York. The Mohawk Council of Akwesasne runs the Canadian half, which splits between the provinces of Ontario and Quebec. Both federal governments enforce the external boundaries.

To complicate matters further, the Mohawk Nation, which consists of eight communities spread across the region, is one of six Iroquois Nations joined in a historically powerful and important confederacy collectively represented by an assembly.

went from a farming community to not being able to farm any more because of the pollution.”]

The muskrat fur hat-wearing David, who worked for decades all over the US before returning to Akwesasne in 2007, said Mohawks have adapted to this situation – for better or for worse.

The 62-year-old crosses the externally imposed border daily, carrying Canadian and US dollars in his wallet, buying generous cuts of meat in the US to cook with his cheaper petrol in Canada.

“I’ve just got used to it,” he said of utilising both sides. “That’s just how it works here.”

Lay of the land

Akwesasne Mohawks traditionally subsisted through agriculture, hunting and fishing. But after over two centuries of encroachment by European settlers, and the subsequent emergence of heavy industry nearby, they were left with a divided, semi-urban scrap of land ill-suited to their traditions.

“There were a lot of things that changed,” said Beverly Cook, 61, one of three chiefs on the St Regis council. “[We] went from a farming community to not being able to farm any more because of the pollution.”

Economic malaise and reliance on government led to no businesses and a plethora of federally funded trailers, added Ron LaFrance, 49, another chief from the American side. The situation has slowly improved, both agreed.

“Thirty years ago you could tell you were on the reserve; now you can’t,” said LaFrance. “[We’ve] moved into the 20th century.”

The Akwesasne Casino Resort, opened in 1995 after gambling proponents won a closely contested referendum, is the primary local landmark. A sprawling, functional site of gaming and bingo halls, restaurants, a seven-floor hotel and big parking lot, it wouldn’t look out of place anywhere in Middle America.

Roadside adverts proclaim: “Gambling is not in our culture.” But locals have accepted the casino as beneficial, said general manager Patrick Bassney.

About 40 percent of the staff are Mohawk and it generates $19m annually for the St Regis administration, said Aimee Benedict, a media manager for the council. “Just about every programme within the tribe gets money from the casino,” she added.

More modernisation is imminent. An $11m US Department of Agriculture grant is paying for the replacement of the dial-up connection with fiber-optic broadband. It will herald the launch of a TV station airing Mohawk news, weather and current affairs.

“This is a big deal,” said Benedict. “It’s going to totally change the way we reach our community.”

More than anything else, money makes the border materialise. The two tribal administrations have independent funding while private utilities, such as water and gas companies, only operate within their respective national boundaries.

“The bucks stop at the border,” said Les Benedict, assistant director of the environment division on the American side, noting federal and state funds can only be spent within the US.

A few agencies operate across Akwesasne. The most visible: the volunteer fire department. It comprises three stations – in Hogansburg, NY, Ontario and Quebec – that respond to emergencies.

Jason McDonald, 39, who lives on the American side, said the reserve’s division had been problematic but doesn’t impede their work now. “We’re not a political entity,” he explained. “When there’s a big operation, there is no border.”

Issues, such as getting the power shut off and using standardised equipment and fire hydrants have been resolved, he added.

His brother and fellow volunteer firefighter, Adrian McDonald, 44, whose home is split by the border – he has a Canadian phone number but receives power from a US utility – said the department could be a model for a more unified approach.

He added: “We always say that. Why can’t this community work more like the fire department – what border?”

Matthew Rourke, 40, a detective sergeant of the St Regis Mohawk Tribal Police, conceded the junction of jurisdictions is “a nightmare”.

Police from the Canadian side must pass through the American part 90 percent of the time to reach their territories, he said.

“There’s time when I get in arguments with them,” Rourke admitted. “But we still have that common goal of protecting our community.”

He said the main issues his 30-member department faces are similar to any US border area: criminals utilising the boundary for human and contraband trafficking.

“Organised crimes like it [here] because they know that our people like to stick up for their rights,” he said. “And when they can use the sovereignty rights … they try to exploit it.”

The tribal police work increasingly with federal authorities through multi-agency task-forces and Rourke takes offence when outsiders claim the border is porous. “It’s not unmanned,” he said.

Future on ‘the res’

The borders of “the res” – as Mohawks call it – used to be more relaxed, people on both sides said.

Akwesasne residents are granted dual American and Canadian citizenship. But since the September 11, 2001 attacks, stricter customs and immigration enforcement has made crossing the Seaway International Bridge – connecting the bulk of the reserve with the populous Cornwall Island section in Canada – particularly tortuous. It can often take hours, locals said.

There’s currently no high school on the reservation. Children choose from four in Canada and two in New York, with many making a daily international commute.

Meanwhile, Filfred Tahy, 42, an artist who runs a store on the American side, relies on Canadian customers benefiting from the favourable exchange rate to shop. He hears regular reports from customers of harassment at the border.

“They just want to know everyone’s business,” he said. “And Natives have to declare everything.”

Many residents have stopped making non-essential trips, such as visiting relatives on the other side. The situation has become so intolerable some think of leaving the reserve.

“Sometimes it feels like it’d be easier just to … no longer live as a Native-American,” said Heather Phillips, 42, who was born and raised on the Canadian side. “But we identify our identity with our territory.”

Although the prospects for a more unified Akwesasne – and looser border controls – appear remote, there’s some optimism for greater cooperation and better economic prospects.

Residents note Mohawks are among the best educated of all North American tribes. The decline in heavy industry in nearby towns such as Massena – which were once more prosperous – has left Akwesasne as one of the only economic engines around, they said.

David, the Canadian-side chief, said he envisages a future economy built around growth industries such as alternative energy, light manufacturing and tourism.

“Akwesasne is slowly emerging as a hub,” he said. “I’m looking into the future very positively.”

This is the second in a four-part series on border towns around the world. Part I is here. 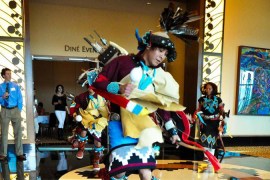 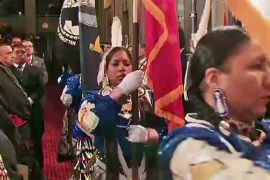 Native American leaders ask US government to follow through on promises and provide welfare and security. 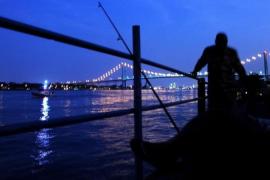 One of busiest bridges reopens after it was shut for hours, days after similar threat to tunnel connecting two nations.