To some people, Henry Kissinger, former US secretary of state under President Richard Nixon, is an American icon and visionary who helped open up China and laid the groundwork for Middle East peace talks.

To others – particularly the anti-war group Code Pink – Kissinger is a war criminal, who orchestrated the secret US bombing campaign of Cambodia during the Vietnam War and helped despots such as Chilean dictator Augusto Pinochet stay in power.

That anger spilled over on both sides on Thursday when Code Pink protesters disrupted a US Senate hearing in Washington DC shouting “Arrest Henry Kissinger for War Crimes” just as the 91-year-old former diplomat – wearing a sling on his arm – was about to testify on global challenges and national security strategy (see it here https://www.youtube.com/watch?v=yP9In2fNs84).

Senator John McCain, chairman of the Armed Services Committee, who referred to Kissinger as an American who served “with great honor and distinction”, was furious, telling the protesters to “to shut up or I’m going to have you arrested”.

McCain, who was a prisoner of war in Vietnam from 1967 to 1973, then referred to the the Code Pink protesters as “low-life scum” to scattered applause from the hearing room.

He later issued a press release saying Kissinger had been “physically threatened” by the protesters.

Medea Benjamin, Code Pink co-founder, told DC Dispatches they did no such thing, arguing that Kissinger is the thug, “associated with real physical intimidation and, unfortunately, has never been held accountable for the war crimes he is guilty of”.

McCain says authorities will take action against the group but, as of this writing, no official charges have been laid against any member of Code Pink. 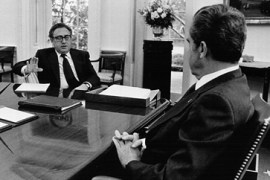