London, United Kingdom – Muslims and Jews living in the same North London neighbourhood are making a stand together against hate crime amid concerns of an increased threat to both communities in the aftermath of the Paris attacks.

Jewish communities in the UK have been on a heightened state of alert since a siege orchestrated by a gunman at a kosher supermarket in the French capital left four hostages dead, with police and Jewish neighbourhood watch groups stepping up security around synagogues and schools.

The government also pledged police support for mosques amid reports of an increase in anti-Muslim hate crime following the linked attack by gunmen claiming allegiance to al-Qaeda in the Arabian Peninsula on the offices of the satirical newspaper Charlie Hebdo.

Meanwhile, a widely reported survey conducted earlier this month by the Campaign Against Antisemitism, a lobbying group established last year, suggested that increased numbers of British Jews were questioning their place in their own country.

More than half of respondents said they were fearful that Jews had no long term future in Europe, and one in four said they had considered leaving the UK because of rising anti-Semitism.

Although subsequently criticised as methodologically flawed, and described as “incendiary” by the Institute of Jewish Policy Research think-tank, senior politicians expressed alarm at those conclusions.

“I never thought I would see the day when members of the Jewish community would say they were fearful of remaining here in the United Kingdom,” said Theresa May, the home secretary. Boris Johnson, the mayor of London, vowed the city would remain a “safe haven” for Jews.

But in the Stamford Hill neighbourhood of Hackney, north London, where Europe’s largest concentration of Haredi Jews and a substantial Muslim minority share the same streets, community leaders of both faiths said they stood united.

“The Jewish community and the Muslim community are facing difficult times at the moment, but it is not a case of them or us. We are all in the same boat,” Munaf Zeena, chairman of the North London Muslim Community Centre, told Al Jazeera.

“We have a big Jewish community here, and they have been victims in Paris. I think we have a responsibility to make sure that those who feel uncomfortable or unsafe feel supported. It is our role to give them that moral support and to stand by them in every way we can.”

Rabbi Herschel Gluck, a veteran international conflict mediator and founder of the Muslim-Jewish Forum, a local initiative established in 2000, said Jews and Muslims were “not just living side by side”.

“There is a palpable feeling of warmth when one sees members of the other community in the street or going about our business,” Gluck told Al Jazeera. “It is not just that we tolerate each other. We actually engage constructively as very good neighbours with each other.”

Gluck said the idea for the forum, the first Muslim-Jewish interfaith organisation of its kind in the world, grew out of his involvement in peace and reconciliation work in conflict zones, including the Middle East, Kashmir, Bosnia and Herzegovina, Kosovo, and Sudan.

“I thought, ‘Hang on a second, here I am working throughout the world, what’s happening in my own backyard? Is everything as rosy as it could be?'” he said.

“I felt that while things were okay, we were living in a changing world and you never know what tomorrow is going to bring. I thought, ‘Is our relationship strong enough to stand a crisis in the future?'”

Relations between the two communities in Stamford Hill have deep roots, dating back to the arrival of Muslim migrants from South Asia from the late 1950s onwards. Among those who initially welcomed and helped them settle was a small community of Hindi-speaking Indian-born Jews.

“When we came we had nothing, and a lot of the estate agents and solicitors were Jews. Many of them were very helpful at a grassroots level. We never forget someone who helps us and the relationship grew and blossomed,” Eusoof Amerat, a community advocate, told Al Jazeera.

“It isn’t just that we acknowledge each other’s faith, cultures and ways of life. It is more to do with justice and fairness. When we deal with things we try to be just. If it is our side that is wrong we will accept that. Whether at a local, national or international level, where justice and fairness are not there, division grows.”

One recent initiative endorsed by both communities has been the work of the Shomrim, a police-trained voluntary Jewish community patrol that responds to reports of crime, anti-social behaviour and other incidents.

In recent months, information provided by the Shomrim has helped police make arrests following a number of cases of apparently anti-Semitic vandalism, with vehicles and a school sign daubed with swastikas, and dozens of cars, including many belonging to Muslim families, having their tyres slashed.

But Ian Sharer, a local councillor, said none of the reported incidents had involved anyone from the local Muslim or Jewish communities.

“There have been a few nasty things, but the number of incidents involving Muslims and Jews in the past year is nil and despite everything that has happened in the Middle East and Paris it is still nil. Relationships are not strained at all,” Sharer told Al Jazeera.

In 2013 Al Jazeera reported on how the Shomrim had added local mosques and other Muslim institutions to the sites monitored on their patrols following attacks on places of Islamic worship in the aftermath of the killing of a British soldier in London.

The group has also advised the Muslim community on protecting its own buildings, and Chaim Hochhauser, Shomrim’s supervisor, told Al Jazeera he would be “more than happy” to see a Muslim counterpart organisation established.

“We still do patrols around the mosque. We are there for the whole community. At the heart of Shomrim’s objectives is an ethos of supporting all Londoners’ safety. If any harm happens to the community everyone suffers,” said Hochhauser.

Last year the Shomrim were cited for their “courage” in supporting the Muslim community by John Kerry, the US secretary of state, in a speech introducing the US’ annual report on international religious freedom. Addressing an anti-Semitism conference in Berlin in November, Samantha Power, the US ambassador to the United Nations, also paid tribute to their efforts.

Stamford Hill’s Muslim leaders have also been praised for standing in solidarity with their Jewish neighbours.

“I was greatly impressed with the cooperation between the Jewish and Muslim communities, and particularly with the work done at the North London Muslim Community Centre, which is available to everyone in the area,” Gillian Merron, chief executive of the Board of Deputies, the representative body of the British Jewish community, told Al Jazeera during a visit last week.

“This is a great model of local cooperative engagement and something we all could learn from. It feels as if the community is really reaping the rewards of the many years of work through the Muslim-Jewish Forum.”

Munaf Zeena admitted that maintaining neighbourly relations sometimes meant agreeing to disagree on divisive issues, such as Israel’s occupation of Palestinian lands. Yet, he said, when local Muslims raised money for the victims of Israel’s assault on Gaza last year, a substantial donation was made by the Jewish community.

“Everything we do here, we have a bigger picture in mind,” he said. “Sometimes you ignore problems that exist because if you want to have peace in the world, if you want people to be able to live side by side, then you look at the bigger picture.”

For local Haredi Jews, many of whose families arrived in London as refugees from Nazi-occupied Europe or as Holocaust survivors, Tuesday’s Holocaust Memorial Day and 70th anniversary of the liberation of Auschwitz, marks a grim reminder of the darkest days in their history.

But Rabbi Gluck said he believed the example of Stamford Hill proved the potential for Jewish and Muslim communities elsewhere in the world to flourish side by side.

“Historically, Jews and Muslims have generally got on well,” he said. “Of course, different situations have a different dynamic and we can’t say it works here so it will work somewhere else. But at the same time, if we do put in the work it will certainly make things better.” 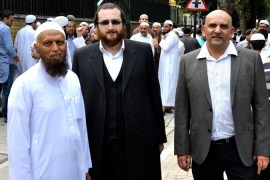 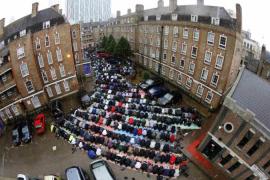