Paris, France – For many here the massive “marche républicaine” two weeks ago represented what Interior Minister Bernard Cazeneuve called the French “attachment to freedom of expression”.

As many as four million demonstrators turned out on January 11 to show support for the values of the republic, and remember the 17 people killed by gunmen who attacked the satirical newspaper Charlie Hebdo and a kosher supermarket. They marched in unity, waving pencils, placards, and even the French tricolour, the latter symbol rarely brandished in a country wary of patriotism and still unreconciled with its colonial past.

As the world now turns its attention to other headlines, France’s domestic debate has moved on to how the cherished freedom of expression should manifest itself.

In the latest issue of Charlie Hebdo – which saw its print run explode from 60,000 to seven million copies – Editor-in-Chief Gérard Biard writes, “Charlie has lots of new friends. The unknown and worldwide celebrities, the humble and the well-to-do, miscreants and religious dignitaries, the sincere and the Jesuits, those whom we’ll keep for life and those who are just briefly passing through.”

In a classic Charlie take-no-prisoners style, those “briefly passing through” was a likely reference to some 40 world leaders who took advantage of the photo opportunity to pose arm-in-arm for the cameras – many from lands notorious for repressing freedom of the press at home.

But “Today”, Biard continued, “we’ll take them all. We have neither the time nor the energy to sort them out. But as far as we know, we’re no dupes.”

Last week, the French left-leaning daily Libération ran an editorial by “European citizen” Thomas Misiaszek who wrote he was shocked and angered enough by the massacre of journalists, police officers, and Jewish citizens to take to the streets on January 11 “like everyone else”.

But what does he intend to do now that the “electroshock” has passed?

“Let’s be honest,” Misiaszek admitted. “Nothing. I’m not going to do anything.” At least nothing more than he has already done: marching with his “Je suis Charlie sign” and flooding Facebook and Twitter with links to articles and poignant accounts of the tragedy.

“For four or five days, I was ready to take up arms, and now it’s true that the tension has subsided,” he wrote. “At the same time, you’ve got 2,000 Nigerians assassinated amid general indifference, ‘I am not Charlie’ protests in Muslim countries, attacks on mosques in France, the burial of the Charlie Hebdo journalists.”

Luz’ comment hits “ordinary guys” such as Misiaszek where it hurts. Recent history, he wrote, has taught his generation that, “All we have to do is wait for the good guys to beat the bad guys and take advantage of the situation, like stowaways.”

Or maybe we just have to believe we can make a difference.

Enter Samuel Grzybowski, the 22-year-old president of Coexister, an interfaith organisation he founded in 2009 when he was still in high school. “We didn’t realise what we were doing back then,” he told Al Jazeera. “We were just a group of 11 young people from different backgrounds who met at a rally we’d organised because we believed there could be peace in the Middle East.”

Since then, the young social entrepreneur and his colleagues have recruited more than 1,000 members who are helping Coexister realise its aim of “unity in action”, a motto that plays out in three arenas: dialogue, solidarity and public awareness.

Believers and non-believers, practising or non-practising, we are profoundly different in our convictions, but we know that we can and we must work together.

The phone has been ringing off the hook since the Paris attacks, said Coexister communications director Chloé Ramanijafy. “But now we have to work on promoting answers and dialogue, and show that it’s possible not just to coexist, but embrace our diversity.”

Grzybowski agreed: “Especially nowadays, when prejudice and racist acts have become the currency of our modern society.”

He called on the media to spread more information about solutions instead of merely reporting on “what keeps us apart”.

“Believers and non-believers, practising or non-practising, we are profoundly different in our convictions, but we know that we can and we must work together,” he said, citing his respect for France’s unique form of secularism, known as laïcité, which guarantees the separation of church and state while still protecting freedom of religion.

Speaking to high-school students outside of Paris on Friday, Prime Minister Manuel Valls called laïcité “the very cement that makes France what it is”.

What about that “ordinary” citizen unsure what to do now that he’s taken that black-and-white “Je Suis Charlie” profile photo down from his Facebook page?

“Start with a simple, immediate action,” said Grzybowski. “Talk to the guy at the mosque or synagogue next door, ask him what he thinks before going to the so-called ‘experts’.”

Volunteers and staff from the organisation’s local chapters have been quietly decorating mosques, synagogues and other places of worship with chains of paper hearts bearing messages of peace and tolerance.

An imam in Brest, in western France, arrived at the main mosque a few days after the Paris attacks to find long strings of these paper hearts attached to the gates.

“So many of us were touched that after the prayer, we went down to the City Hall to join the unity march,” he told a local newspaper. “What we’re afraid of is that the terrorists [could] destroy everything that we have built in terms of social cohesion… We have to work hand in hand, now even more than ever.”

French social media users have taken a cue from Sydney, Australia residents who responded to an anticipated backlash against Muslim citizens after last December’s hostage crisis left two hostages and the gunman, who claimed affiliation with the Islamic State of Iraq and The Levant, dead.

Using the Twitter hashtag #ridewithme, Sydney commuters described which trains, buses and ferries they frequented and offered their company and solidarity with Muslim residents worried about being harassed when riding alone. The French equivalent #voyageavecmoi (travel with me) is still taking off in a less “tweet-friendly” society and similarly is becoming more frequent.

“I’ll walk with you” is an initiative launched with a YouTube video featuring a series of people of many races, young and old, holding the sign #jemarcheavectoi.

The group said it is responding to questions posed by those who felt powerless after the attacks and wanted to make things better.

As for Charlie Hebdo itself, the newspaper has been wounded but is still provocative, even defiant. While thanking the legions of “Je suis Charlie” fans “with all our heart”, the post-attack issue’s editorial closes with an important distinction.

“The millions of anonymous people, institutions, heads of state and government, political, intellectual and media personalities and religious dignitaries who have proclaimed ‘I am Charlie’ should know that this also means ‘I am laïcité.’ We are convinced that for the majority of our supporters, that’s obvious. We’ll let the rest of you work that out for yourselves.”

Despite having just buried eight of its best and brightest, the newspaper has not lost its French appreciation for irony. It closes with a reference to Femen – an international women’s movement of topless activists – and the pontiff.

“One more thing, important,” the editorial warned. “We’d like to send a message to Pope Francis, who is also ‘Charlie’ this week. We’ll only accept ringing bells at Notre Dame in our honour if it’s Femen doing the ringing.” 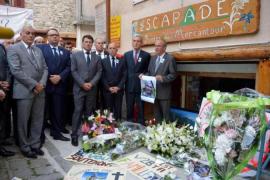 Why the murder of Herve Gourdel will be a game-changer for French policy vis-a-vis terrorists. 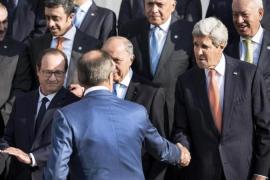 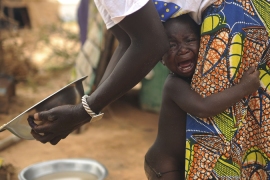 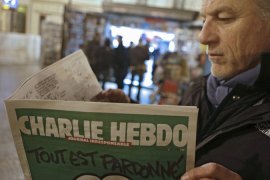