The Senegalese-American rapper Akon, who spent most of his life in the US, still holds Africa close to his heart.

His initiative, known as “Akon Lighting Africa” programme, aims to bring clean electricity to 49 African countries by the end of 2020.

However, in an interview with Talk to Al Jazeera, he turned his attention to the increase in US police brutality and his views on life as an African-American.

Al Jazeera: What is it that motivates you to give back to Africa? When was it in your successful career that you decided you wanted to give back?

Akon: I don’t think there was ever a particular moment where I said ‘I gotta give back.’ Being African, raised in Senegal, it is a natural instinct. I always wanted better for my country, so that was more of the motivation.

Al Jazeera: ‘Akon lighting Africa’ is a very ambitious project to bring electricity to one million African households, by using solar energy, by the end of 2014. What has been achieved?

Akon: We actually overachieved. We are beyond a million households now; we are actually in 14 countries. We started with just creating solar energy for rural areas and households and now were doing solar street lamps all through the countries and also incorporating it within each country, we have put in solar in all the villages and we are also creating a system where we are actually employing locals to maintain it and to keep everything in order.

Al Jazeera: How much money did you invest in this particular project?

Al Jazeera: You are certainly the perfect example of the American Dream coming true. There are millions of Africans who make it to the states and don’t have the same success as you have. What do you think is keeping them from reaching that?

Ultimately, you can't change who you are and I think the biggest obstacle is that when people come to the US they kind of alienate their original personalities and conform to what's there. When they do that, they don't get accepted.

Akon: This advice will go out to anyone who is migrating to the US. Ultimately, you can’t change who you are and I think the biggest obstacle is that when people come to the US, they kind of alienate their original personalities and way of life and conform to what’s there. And when you do that, first of all, you will never get accepted.

Al Jazeera: You know, you once told the Source magazine that ‘Black people in the US can nag all they want how the system is against black people, but if they saw how other people lived in Africa, they would see how blessed they really are.’

Do you still believe this today, when you see unarmed black teenagers being killed by the police, when you see protests in St Louis, Missouri, where you lived for a long time, when you see people taking to the streets in Atlanta, New York, to denounce police brutality against young African-American men? Do you think the system really is for these people?

Akon: Well, the system was never for them.

Al Jazeera: So, what made you say this to Source magazine?

When I said that, I was talking about the environment in where they live. And the rights they actually have. And the blessing they do, you know, have actual access to. In Africa, the way I grew up, let’s just pick a project in New York, for instance; that’s a 5-star hotel compared to the environment I came up in.

Like, if they see how they live, they actually get money from the government, there actually are programmes that help the impoverished and the poor, and you get food stamps. I mean, they have it good, compared to Africa.

There’s a huge difference in how the government allocates funds for the poor in Africa; the environment is not even left and right. If these groups were to be taken from the environment where they are now to the same ‘equal’ environment in Africa, they would be crying to come back to America

Al Jazeera: But you say now that the system is against them?

These things were made back in the umpteen hundreds and these are the same exact literature that’s down today. So mind you, by the time it was made, black people were never in a position where they were looked at as equal, so if it’s the same documents that they are applying today, it wasn’t meant for them.

Al Jazeera: When you see Ferguson, Missouri, today and you hear of Michael Brown and Eric Garner, do you sympathise? Do you understand that experience that these people are denouncing?

Akon: I clearly understand the frustration. What I don’t understand is that how, if I’m in a position where they are and I don’t want to speak too much for them, because I think I might have some knowledge they might not quite have, because I’m in the position where I have experienced Africa, and I’ve experienced the United States. I always felt like Africa was for Africans. When I see African Americans in America dealing with all these issues, my first question is: ‘Why don’t they just go back home?’

Akon: Back to Africa. Where they’ll be treated fairly. Where they’ll actually be praised for who they are, because of the fact that they are American. They’ll get way better treatment, they can invest their money…

Al Jazeera: How do you tell people who have lived for generations, centuries and centuries in one land to move to a place they don’t know?

Akon: No, but that’s my point. They don’t know. It starts with a visit. How many African Americans do you know [who] actually consider Africa as a vacation spot? Not one. When you look at the overall population of African Americans, a small percentage would decide to go to Africa for vacation. Even, just for knowledge, just to know where they came from, just to get an idea of what that is, there is so much fear instilled in them, that they wouldn’t even want to go there to visit. You mention Africa, they start shaking. 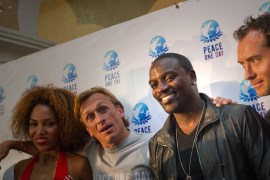 The Senegalese-American recording artist talks frankly about US race relations, “rebranding” Africa, and his music.