Reports from Afghanistan indicate heavy fighting is raging inside Kunduz as government forces, backed by US air strikes, battle Taliban fighters currently in control of the strategic northern city.

The fighters seized the capital of Kunduz province after making a daring entry from multiple directions on Monday, dealing the biggest blow to Afghan President Ashraf Ghani since he took office a year ago.

The assault on Kunduz is the worst attack since the bulk of foreign troops left at the end of last year, and come just a few months after the appointment of the new Taliban leader, Mullah Akhtar Mansoor.

As they spread through the city, Taliban fighters set free more than 700 Afghan prisoners, including women and children, from Kunduz Central Jail.

The facility held over 110 Taliban prisoners who reportedly joined their comrades soon after they were freed.

The storming of the jail has united over 100 trained Taliban commanders and master bomb-makers with their fellow fighters to lead future attacks throughout Afghanistan.

“This can cause the justice system to fall apart,” Zabi Majidi, a Kunduz resident and social activist, told Al Jazeera.

“The Taliban is now using this [freeing of prison inmates] as a new strategy to rejoin with veteran insurgents and emerge as a powerful group to capture as much territory as possible.”

In the process, the Taliban has not only recovered fighters, it has also won sympathisers in the city.

Gulajan, a 38-year-old freed prisoner, was convicted of training rebels in bomb-making. Even though he denied the claims, he was sentenced to 12 years in prison.

“I was wrongfully convicted. I was never involved with the Taliban,” he said.

Recalling the moment he was released from the Kunduz jail, Gulajan said women and children were released first, followed by male prisoners.

“I was told by a Taliban commander that I am a free man now. I ran as fast as I could,” he said.

Gulajan believes that they were “God sent” and “it’s in the best of their [Afghans] interest to have the Taliban take over Afghanistan and bring the Islamic law back”.

A hardline commander leading the Taliban in Kunduz, who spoke to Al Jazeera on condition of anonymity, believes it is their religious obligation to free Muslim prisoners.

“We believe any Muslim jailed under the Afghan government’s law and order are wrongfully convicted and deserve to be free. We believe justice should be served according to the Islamic law,” he said.

RELATED: Is an ‘Afghan Awakening’ the solution?

Painda Hikmat, a freelance journalist based in Kabul, says the Taliban’s ability to break into prisons and release large numbers of incarcerated Afghans presents a grave threat to the government and the justice system.

“It is a big challenge to the government’s ability to enforce laws if prisoners are released this way,” Hikmat said.

“We all feel very vulnerable and exposed to crimes in the city, knowing that hundreds of criminals are getting freed from prisons.”

Soon after the Taliban took over Kunduz, Mullah Akhtar Mansoor released a statement calling on the Afghan government to admit defeat.

Afghanistan has mobilised military reinforcements to take back Kunduz, but the ground forces, despite ongoing US air strikes, are coming under heavy fire.

People in Kunduz are questioning the security policy of the government, and believe the authorities were lax in their approach.

According to Gulajan, many top Taliban commanders had few restrictions in prison and were allowed to keep their mobile phones.

“Taliban commanders were treated differently than other prisoners in jail. Most of them had quality food to eat. Basically they were taken care of,” said Gulajan.

“All prisoners were treated equally in prison. There are laws on how to treat prisoners and we made sure they were followed. There is no distinction among prisoners whatsoever,” he told Al Jazeera.

“We’ve reinforced security measures in other provinces of Afghanistan, especially in areas where prisons are located.”

Before the Kunduz assault, more than 300 prisoners escaped when Taliban fighters stormed a jail in the central Afghan city of Ghazni earlier this month.

According to the Taliban spokesman, Zabiullah Mujahid, the prisoners were “innocent” and were taken to “mujahideen-controlled areas”.

Hikmat, the Kabul-based journalist, says restoring public faith in security, law, and order looks like an uphill task after the incidents in Ghazni and Kunduz.

“We are all hoping to have a stronger security system to prevent such attacks,” he told Al Jazeera.

“But at the moment, we are seeing something else.” 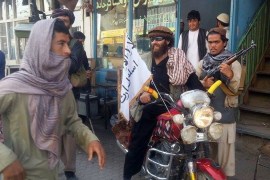 US launches first air strike as fears rise that control of city would give Taliban a strategic base for operations. 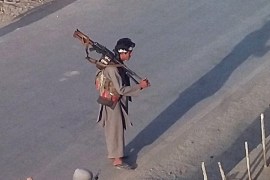