Kunduz City, Afghanistan – The head of surgery at Azizullah Safar Regional Hospital scrolled through his phone to the anonymous message sent threatening his life.

“Dear Doctor and brother,” the text message in Pashto language read. “You decided not to answer the Mujahideen phone call… As Aziz was killed, you will be killed in the same manner.”

The sender was describing the assassination of Dr Azizullah Safar, also known as “Aziz”. The mere mention of the physician’s name conjures up fear among healthcare workers in Kunduz, a city about 250km north of the capital, Kabul.

In June 2010, Safar – then the director of the Kunduz regional hospital – was walking up the stairs to his private clinic when a bomb planted under the stairwell detonated. Safar was killed while a woman and child waiting to see him in his office were wounded.

An Afghan official at the time said arabaki, a Pashto term for a local militia, was behind the attack.

Niazi isn’t the only one who has received threatening messages; many doctors, nurses, and administrators have had similar warnings.

Threats against healthcare professionals by armed groups were amplified on Monday after Taliban fighters raided a 200-bed hospital in the city following an early morning attack.

Heavy fighting has continued to consume the northern province, and hospitals have registered a significant increase of patients.

In May, the French NGO Doctors Without Borders (MSF) trauma centre in the heart of Kunduz City reported the number of war-wounded had more than doubled compared to the same period last year, from six percent to 14 percent.

The majority of victims suffered gunshot wounds or injuries from bomb blasts.

As in other parts of the country, the ever-shifting war front in Afghanistan’s north is expanding. With increased fighting, a steady flow of new combatants is reshaping how doctors work by throwing them in the line of fire.

“All sides call us with demands, saying they must be accepted or the doctors will be killed,” said Saad Mukhtar, Kunduz’s public health director. “Doctors have no choice but to obey. We have become negotiators in this war.”

The Taliban is now in control of about 70 percent of Kunduz’s districts, while government-backed militias govern mostly district centres.

Militiamen are the first problem for medical professionals and the Taliban rank second, according to Niazi.

“Militia use their weapons to talk. They walk into our operating theatres in the middle of a surgery and threaten the doctors,” he told Al Jazeera.

After doctors complained, a checkpoint was installed at the hospital entrance to prevent armed men from getting in, but “one checkpost cannot prevent all the militia from passing through”, Niazi said.

About 67 health clinics are scattered throughout the province offering limited medical services. Only MSF delivers care on par with international standards.

In April, the start of the summer offensive, fighting erupted in Chardara, a district several kilometres outside Kunduz City.

Unable to get medical care for its wounded fighters, the Taliban requested that the Ministry of Public Health send surgeons to the district two days a week.

Recently, a Taliban fighter with a bullet hole in his foot, was received at a health facility, said a medical worker who spoke on condition of anonymity because he wasn’t authorised to talk to the press.

A 20 centimetre-long bicycle spoke had been inserted from the big toe extending to the Achilles tendon to stabilise a shattered bone in the fighter’s leg.

“Amazingly, there were no signs of complications or infections so they must have a surgeon, or at the very least someone experienced in war surgery. But clearly they’re lacking … supplies,” the health worker said.

Deploying doctors into Taliban-held districts, a solution presented to the government by a doctors’ association, was met with hostility.

“The Taliban threatens people to come [treat its fighters or else] saying they will kill them. But the government won’t allow doctors to go,” said Dr Said Husain Shah Hashimi, a founding member of the Doctors Association of Afghanistan.

Government-backed militiamen have also let their views be known to physicians planning to help the Taliban.

“If you treat the Taliban, how can we differentiate you between the Taliban?” health workers are asked, according to Niazi.

Doctors and Chardara residents told Al Jazeera the Taliban treat health workers well, and even pay them for medical services.

A lack of government funding is exacerbating the situation with healthcare infrastructure also coming under pressure, Hashimi said. Over the past three months, 10 health facilities have closed in Kunduz.

“Doctors need a new strategy,” said Hashimi. “They also need to adapt to the realities on the ground. One person is against us, but 99 percent of the people want help from us.” 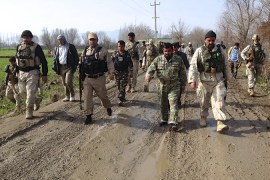 Taliban makes quick gains in Afghanistan with little opposition from Afghan army as US withdrawal begins.