Hong Kong, China – Eighteen-year-old student Joshua Wong has become one of the most recognisable young faces in the world.

One year ago, 100 people led by members of Wong’s group Scholarism occupied Civic Square in Hong Kong, in protest against the Chinese government’s opposition to open elections.

This led to an occupation of the Central and Mong Kok districts that brought more than 100,000 people to the street for over 79 days, earning it the name the Umbrella Movement.

Wong now faces up to five years in prison on charges of inciting unauthorised assembly, contempt of court, and obstructing a bailiff – charges that have been disputed by the legal fraternity and activists alike.

He spoke to Al Jazeera ahead of the one-year anniversary of the start of the protests to discuss the future of Hong Kong’s pro-democracy movement – and how the past 12 months have changed his life.

Al Jazeera: One year on from the occupation, the general sense is that the Umbrella Movement itself wasn’t a success in that it didn’t meet all of its objectives. How do you view it now?

Joshua Wong: Of course we could not win the battle, but we’re still optimistic about winning the war. We hoped to get universal suffrage and direct elections and we failed. So we lost in the Umbrella Movement, but it is really valuable for us to reflect on the previous way we fought for universal suffrage.

In the past we hoped to adopt universal suffrage in One Country Two Systems. But after the Umbrella Movement we should think about after 50 years. This principle [of One Country Two Systems] is passed after 2047, so what is the future of HK? In 2047, a lot of council members will have passed away, but I will still exist in the world – I [will be] just around 50 years old.

So from this point of view, the Umbrella Movement is good to motivate me to continue to fight in the future. In the past, I may [have thought] that if we occupy, we can win and have democracy. Of course, we failed and it gave me a lot of reflection to notice that we need to fight for democracy, direct elections, and autonomy. The minimum requirement is we need to fight until 2047.

Al Jazeera: There are open district council elections in November with some non-mainstream candidates running. Other influential figures have said the movement should continue through political channels. What is your view?

Wong: After 2047, One Country Two Systems may change to be One Country One System and Hong Kong SAR [Special Administrative Region] is not an SAR any more, just being a normal city under the rule of CCP [Communist Party of China]. So we need to fight for 32 years to reach the long-term goal. We need to get more seats inside different councils and institutions. I agree with this point of view.

Al Jazeera: What do you see your own role as being?

Wong: I am still an activist.

Al Jazeera: You don’t have any intention to enter politics?

Wong: It depends on how you define politics. Normally, in Western countries, movements are led by party leaders, political parties. But in Hong Kong, party leaders will not lead the movement, only students. I think I’m already involved in politics. Some may say that Joshua Wong is a politician, and it may be. I’m not going to say: ‘I’m not a politician! I don’t touch politics! I just fight with the judges, because civil disobedience isn’t politics.’

But in Hong Kong the requirement to run for election is 21 years old. I’m just 18. I have more time for reflection and consideration. I hope next year at the [legislative council] elections more of the new generation can get a seat.

RELATED: The teenager who defied China

Al Jazeera: Are you frightened by the prospect of facing a prison sentence?

Of course, it may affect your daily life. If I need to continue to go to the court, I can’t go to school for those few days. It’s a big pressure for myself. But I think it’s still valuable for me to have made the decision to be involved in last year’s movement. If I wasn’t involved … it would not result in the Umbrella Movement. We created history.

Al Jazeera: From the outside, Hong Kong appears to be a very functional, affluent city. How has the Umbrella Movement changed people’s perceptions?

Wong: Some people in Western countries say Hong Kong already has democracy. They may have this perception. But they don’t understand the theory or system behind it. Just like Singapore still doesn’t have democracy. On this point of view, the Umbrella Movement has changed some people’s feelings on Hong Kong.

Al Jazeera: You have said previously that you don’t wish to be regarded as a hero, but every movement needs a figurehead. Are you comfortable in your role as the face of the movement and how has it changed your life?

Wong: I agree that every movement needs a figure to build the statements or ideas or the values behind it … I may say that a lot of activists or politicians want to be famous to gain more benefits or win a seat in the elections.

I’m not really comfortable with these things because it’s really tiring. Every day now I have three interviews. On the one-year anniversary, everybody will find me. So, of course, it’s quite tiring and confusing sometimes, but I think that if I pay the price to be one of the figures and icons, and we can reach the goal of self-determination, I accept it.

When asked about the charges brought against activists, a Department of Justice spokesperson told Al Jazeera that “in respect to cases relating to the Occupy Movement, in the light of the unprecedented scale, particular consideration has to be given to the effect of a prosecution on Hong Kong law enforcement priorities”.

“Any suggestion that any of the prosecutions against persons participating in the Occupy Movement was motivated by political considerations is no more than a bare assertion without any foundation.” 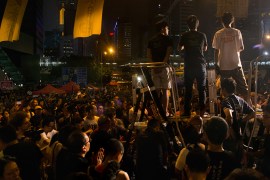 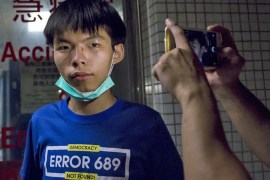 Police make no arrest over attack on Joshua Wong, which occurred just days ahead of a pro-democracy march on Wednesday.