It has been four weeks since more than 280,000 public school teachers in Kenya went on strike demanding a 50 to 60 percent pay rise and there are no signs of either the teachers or the government backing down.

Before it all spiralled out of control following negotiations that started in 2013, the teachers had asked for a 200 to 300 percent pay hike from their employer, the Teachers’ Service Commission (TSC).

The commission in 2015 came up with a counter-proposal of 50 to 60 percent but the teachers rejected this. The commission then went to court, which awarded teachers the increase. The court’s ruling was determined by the fact that the teachers’ employer had already said that it could afford a 50 percent increase.

The pay rise will cumulatively cost about $170 million annually.

This is a very emotive issue and most Kenyans are supporting teachers who have raised many of us and are well respected.

My mother was a teacher until 2008. After 32 years, she retired earning a basic salary and allowances of about $300.

I talked to her about the ongoing strike and she said: “I could not do anything for you kids without taking a loan. Teachers live from hand to mouth and unless you borrow or have something else on the side, you can’t survive.”

But as emotional as this matter is, economists say we should take a breath, leave politics out of it and look at the facts.

President Uhuru Kenyatta addressed the nation on Sunday and made it clear that the government cannot afford to increase teachers’ salaries. He said the wage bill was already too high at 52 percent of the total revenue and paying teachers more will mean harmonising salaries for all other civil servants raising the wage bill to 61 percent. Basically 1.5 percent of Kenya’s population (who make up the civil service) will take the bulk of the revenue collected.

Some economists will tell you that he made valid points. Kwame Owino, the chief executive officer of the Institute of Economic Affairs told me that his main concern is the long-term consequences.

“An additional $170 million that the teachers are demanding for now is nothing, just less than 1 percent of the total spending for Kenya. The worry is how much additive costs it loads. Within four years, it will come up to about $1.5bn added to the public wage bill and this is huge”, he said.

What this could eventually mean is higher taxes, cutting down on the development budget or borrowing more.

The main opposition coalition of reform and democracy (CORD) held a protest rally in support of the teachers. The leader Raila Odinga accused the president of being dishonest with teachers. He reiterated what a lot of Kenyans have been saying – that millions of dollars get lost in corruption and mismanagement, that the government is living beyond its means and wrongly prioritising the country’s needs.

With emotions high on both sides it has been left to the courts to break this impasse. An industrial court is to rule on the legality of the strike and a court of appeal is to review the pay rise awarded.

No one will disagree that teachers have the constitutional right to demand a pay rise and that they deserve more money. The government on the hand has the responsibility to manage public affairs.

But with millions of children caught in the middle and out of school, compromise, much more than chest thumping is badly needed. 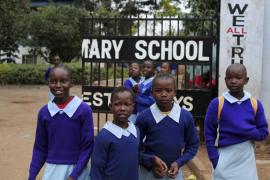 After a three-week-long strike, teachers got a pay rise, but students have little time to catch up ahead of exams.