Yangon, Myanmar – Buddhist monks in Myanmar have begun a two-week victory celebration to applaud the passing of  laws that many fear will damage women’s rights and be used against religious minorities – including marginalised Muslims.

Hundreds of supporters from the ultra-nationalist Ma Ba Tha group formed a convoy of trucks and buses that snaked through the main city of Yangon on September 14 to welcome the introduction of four Race and Religion Protection Laws, which the group drafted itself.

Human Rights Watch has said the bills, the last of which was signed into law late last month, place “unlawful” restrictions on people wishing to change religions, and could be used to force mothers to wait three years between each birth.

Ma Ba Tha’s senior monks have been accused of stoking anti-Muslim violence with sermons preaching that Buddhism, the majority religion, is under threat from Islam.

RELATED: No place for Islam? Buddhist nationalism in Myanmar

“If necessary we must erect a fence with our bones,” boomed a song from a truck-mounted speaker as the early-morning convoy left Shwedagon Pagoda, Myanmar’s holiest site, on its way to a large monastery in the east of Yangon.

As Al Jazeera rode with the convoy, the driver of one truck screeched past and leaned out of his window to shout: “Don’t follow us, go away! You’ll be arrested.”

The celebrations show Ma Ba Tha “asserting themselves and their newfound clout”, said Khin Zaw Win of the Tampadipa Institute, a think-tank based in Yangon.

They come less than two months before a landmark general election that will be seen as a test for Myanmar’s reform process.

A joint statement from nine embassies in Myanmar, including the US and Japan, warned against “religion being used as a tool of division and conflict during the campaign season”.

Since the military junta stepped aside in 2011, hard-line Buddhist groups have taken advantage of liberalisation to gain more and more influence in the country’s politics.

Analysts say the race and religion laws were rushed through parliament to avoid angering those groups.

“At a time when Myanmar faces serious problems with its legal framework … it’s hard to see why these laws should have been prioritised,” said Sam Zafiri, Asia-Pacific director at the International Commission of Jurists.

“Except for the obvious reason that they were called for by militant Buddhist groups like Ma Ba Tha,” he said.

Muslim candidates have been largely excluded from the upcoming election, in what also appears to be an attempt to assuage hardliners.

The opposition National League for Democracy, widely expected to win the poll, failed to field a single Muslim candidate. Myanmar’s election commission has rejected dozens of Muslims on citizenship grounds.

Hundreds of thousands of Rohingya Muslims were disenfranchised earlier this year when the government withdrew the temporary citizenship cards that allowed them to vote.

One showed the Twin Towers in New York engulfed in flames, another the mutilated corpses of four people that the caption said were Hindus killed by Muslims in India.

“The international media are saying Buddhists are aggressive and talking about Buddhist terror,” said Lakana Thara, a monk, as he stood outside the photo exhibition. “But most of the violence and aggression is committed by Islamic groups.”

As he spoke, dozens of monks and supporters clutching copies of the new laws filed in and out of the tarpaulin tent housing the photos.

“We need monogamy,” he said, referring to the Monogamy Bill, which criminalises extra-marital relationships. “A Muslim male can marry up to four women and they can force their women to change their religion.”

Another of the bills, the Buddhist Women’s Special Marriage Law, is also based on the fear of men forcing their wives to convert. Activists have branded it sexist because it explicitly targets Buddhist women marrying outside their religion.

One section gives local authorities the power to publicise an engagement and invite objections from members of the public that can be heard in court.

“If I want to marry a man from another religion I can, but I don’t need to give up my own religion,” she said.

Wai Wai Nu is a women’s rights activist who is also a member of the persecuted Rohingya Muslim minority. “I think it is a very dangerous law,” she said. “It can create a lot of challenges for women in Myanmar.”

A joint statement by Amnesty International and the International Commission of Jurists warned earlier this year that another of the four laws, the Population Control and Healthcare Bill, could lead to authorities carrying out forced abortions and sterilisation.

The law aims to control populations in certain areas with “birth spacing”, though the wording is unclear on whether this would be compulsory.

It has nonetheless raised fears for Rohingya Muslim couples in northeastern Rakhine state, who have in the past been barred from having more than two children.

Thila Kanda Biwantha, Ma Ba Tha’s Vice Secretary, is softly spoken and mild-mannered as he defends the population law while perched on a stage erected in the monastery’s central courtyard.

It was designed, he said peering through gold-rimmed glasses, to ease pressure on healthcare and education services in areas with high population growth.

Soon the stage would be cleared for performances that included a speech on the history of Ma Ba Tha – founded in 2013 – and a young boy singing patriotic songs.

Thila Kanda Biwantha has the calm, satisfied air of someone who has just scored a major victory. The festivities were a way of letting the public know about the laws, he said.

“Myanmar is much safer now,” he said. 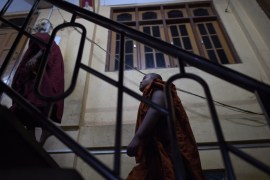 Human rights activists condemn law believed to have been brought in under pressure from hardline monks. 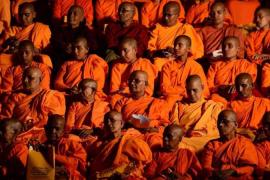