When the fire broke out at the Ali Enterprises factory in Karachi, Pakistan, there was no way for workers to escape the flames – no firefighting equipment, no safety procedures in place, and steel bars blocked windows.

Workers who managed to breakthrough the bars had no fire escapes to climb onto, forcing many to leap to the concrete three or four storeys below.

This was not an informal sweatshop in the back lanes of Karachi, but a large-scale factory with more than 1,500 employees in the heart of the Sindh Industrial and Trading Estate (SITE), one of Pakistan’s largest industrial areas.

A commission set up by the Sindh High Court said fire – Pakistan’s worst industrial incident – killed 289 garment workers and seriously injured 55 more. In the three years since the fire, the victims have encountered delays in their quest for compensation, and now there are reports that the factory owners have fled Pakistan.

Fourteen-years ago, newly married Shahida Parveen moved to Pakistan’s largest city Karachi from Punjab with her husband, Muhammad Akmal. They rented a home in Baldia Town, and Akmal found work at Ali Enterprises.

Over the next 11 years, he worked his way up the factory to become a supervisor. On September 11, 2012, Akmal took the bus to the factory, leaving his wife to care for their three sons, including their newborn baby Ahmed.

The body of Akmal, who died that day in the Ali Enterprises fire, was never recovered. Parveen told Al Jazeera she hopes one day DNA testing will return her husband’s remains to her.

Akmal earned between $192-$278 a month, but Parveen now receives a pension of only $48 a month. To support her three children, she has had to borrow heavily – a situation, she said, is common for families of the fire victims.

“It is the duty of KiK to give long-term compensation because my husband was working in the factory for the last 11 years [of his life],” said Parveen. She has started a petition against the German company asking for proper compensation.

“My little son always asks: ‘Mama, when will Baba come back? Make a call, I want to talk to him.’ They must ensure that this sort of incident must not happen in the future, because I don’t want anyone else to suffer in the way me and my children are suffering,” Parveen said.

Karamat Ali, executive director of the Pakistan Institute of Labour Education and Research (PILER), has been working to secure long-term compensation from KiK, a company with net sales that amounted to $1.68bn in 2014.

“KiK entered into preliminary negotiations and then they backed out,” explained Ali. “They said ‘We do not have responsibility for long-term compensation.'”

A spokesperson from corporate communications at KiK confirmed to Al Jazeera the payment of $1m, but added, “KiK disclaims any responsibility for the outbreak of the fire and, therefore, rejects the claims for long-term compensation.”

It is a stalemate that is worrying campaigners.

“We’re really concerned that KiK is engaging in stalling tactics and biding their time until no one cares any more,” stated Ilona Kelly, the workers’ safety campaign coordinator at the NGO Clean Clothes Campaign.

“The whole reason KiK is a multimillion-dollar company is based on the labour of these individuals who died making their jeans, so why wouldn’t they be responsible?” she said.

“KiK needs to be compelled in one way or another,” said Vanpeperstraete. “Either through public pressure, moral pressure, or legal pressure to sit around the table and negotiate in good faith a remedy that is acceptable to the victims.”

But KiK defends its record, stating the company has “fulfilled its due diligence requirements with regard to Ali Enterprises”.

“Several independent and unannounced audits between 2007 and 2012 have not given us any reason to believe that production conditions at Ali Enterprise were unsafe or risky,” KiK stated.

Parveen said her husband never received any health and safety training at Ali Enterprises, even when a small fire occurred just six months before the fatal blaze.

“He came home late and said there was a fire in the factory, and his supervisor had asked him to shift equipment and clothes to the safe side. His hands were a little bit burned, but he said he managed to control the fire,” Parveen said.

In the aftermath of the fire, the owners of Ali Enterprises were arrested and subsequently freed on bail.

Media in Pakistan now report that Abdul Aziz Bhaila and his two sons, Arshad and Shahid, have fled Pakistan and are now residing in London.

It is alleged that a high-level investigative team flew from Pakistan to London to interview the Bhailas in early September as part of an investigation into whether the fire was an act of outside sabotage.

“How come these people, who were indicted for being responsible for more than 254 deaths, can be allowed to leave the country and live in London?” asked Ali.

“Regardless of how the fire takes place, if you have not left any room for the workers to evacuate themselves, you don’t have emergency exits, and you close the only door that was open and you lock it from outside because you think the workers will steal the finished products – it is irrelevant how the fire started because the workers would have gotten killed in any place.”

The Pakistan High Commission in London stated it had no information about the Bhaila family or Pakistani invesigators. 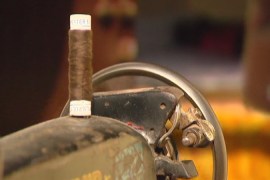