Singapore – Election fever is in full swing on this island nation with Singaporeans turning out by the thousands in recent days for heated rallies and stump speeches in the lead-up to Friday’s snap election.

Social media is abuzz with partisan banter, betting with bookies is brisk, and an air of unpredictability surrounds the outcome in the first national election since the death last March of founding father and political patriarch Lee Kuan Yew.

Facing its greatest challenge after half-a-century of ruling party domination, Lee’s People’s Action Party (PAP) is up against nine opposition parties in the first election in independent Singapore in which every parliamentary seat is being contested.

“It’s a lot more vibrant now, a lot more active,” said Bhas Kunju, a 31-year-old sports journalist, at an opposition party rally. “I think people are interested in a little bit of change, not a complete overhaul of the entire system. It’s more like being at a crossroads – how much change do we want?”

The status quo is a central issue in the campaign. While PAP maintains its one-party dominance is the best way to ensure good governance – Singapore rates as one of the wealthiest and least corrupt countries in the world – opposition candidates argue that checks and balances are needed to keep government responsive.

Showing an unusual solidarity, the opposition parties have agreed not to contest against one another for seats to increase their chances at the polls. A total of 2.46 million Singaporeans will cast their votes.

“Many think the PAP has lost touch with the sentiment of the people. The massive election rallies, which appear even bigger than in 2011, are a clear sign of this,” said Stephan Ortmann, visiting assistant professor at the City University of Hong Kong and author of two books on Singaporean politics.

“The elections are becoming more competitive and it is becoming harder for the PAP to maintain its hegemony.”

While PAP’s victory is virtually assured on Friday, Singaporeans are wondering aloud if its level of support will continue to decline since receiving its lowest vote margin in the last national election in 2011.

In that vote, PAP – headed by Lee Kuan Yew’s son, Prime Minister Lee Hsien Loong – won 60.1 percent of votes, the smallest share of the popular vote since independence in 1965. Many attributed the results to a growing dissatisfaction with one-party rule.

“I believe the majority of Singaporeans would like to hear more voices in parliament,” said another rally-goer, Benjamin Pereira, 67, a third generation Singaporean.

“At the end of the day, they still want the PAP to run the government but with extra voices, so there is always somebody to check them,” said Pereira, a food-and-beverage industry retiree who still works part time as a courier.

Bus driver Ong Ah Guan, 53, has been turning up at various political rallies sporting a collection of flags of opposition parties. “I wish to have more transparency, more checks and balances,” he explained.

Another element of uncertainty is the youth vote. Candidates are vying for support from a new generation of voters born after independence on August 9, 1965, and considered more open to change than their elders.

“You’ve got to be thankful for what the government has done for you,” Evangeline Tan, a 23-year-old account manager who will be voting in her first election, said while attending a PAP rally.

“A lot of the younger generation, my peers, are voting for the opposition parties. I’m not too sure if they are voting blindly.”

A strong showing by opposition candidates on Friday could change the direction of Singapore’s political development and style of rule, wrote Singaporean political observer Zuraidah Ibrahim in the South China Morning Post.

“Either route will keep the PAP government in power for five more years, but the country’s politics could be fundamentally altered by how Singaporeans choose at this fork in the road,” Ibrahim wrote.

For all of the city-state’s prosperity and material comfort, bread-and-butter issues are dominating political dialogue. Opposition rallies are giving voice to anxieties over the country’s mandatory pension fund, a growing dependence on foreign labour, and the rising cost of living.

“We are not opposed to wealth, but wealth inequality,” said Chee Soon Juan, a longtime PAP critic, at a rally for the Singapore Democratic Party, which he heads.

The growing reliance on foreign labour coincides with complaints about overcrowded mass transit. Exacerbating those concerns was a 2013 government white paper on population projecting Singapore’s population growth to 6.9 million – of which citizens would only form 55 percent – by 2030.

PAP’s showing in the 2011 election, and the debate over Singapore’s growing population, resulted in tightened immigration policies. But some see opposition parties looking to capitalise on anti-foreigner sentiment.

“There is a palpable concern that should the PAP lack further electoral support, that it may be compelled to take a populist route in policy-making,” said Eugene Tan, a Singapore Management University associate law professor.

“This could result in policies such as immigration being more nationalistic than it ought to be.” 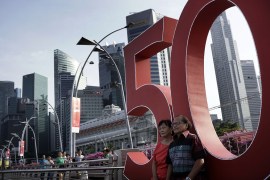 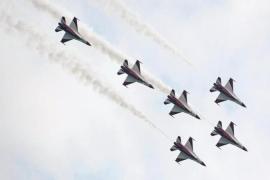 In its quest to remain independent, Singapore has embarked on major arms deals with the US.