Kuala Lumpur, Malaysia – The Malaysian government has shown an increased willingness to muffle the media and curb free speech, critics say, after the recent mass demonstrations over alleged corruption.

On the eve of one of the country’s biggest rallies late last month calling for free-and-fair elections, the Malaysian Communications and Multimedia Commission blocked access to four websites related to the non-government organisation Bersih (Clean).

The move was not an isolated one and comes in a year marked by website shutdowns and the arrests of journalists and civil society leaders.

Despite the blocking of Bersih’s websites and the ban on yellow T-shirts under the Printing and Publications Act, an estimated 100,000 turned out in just that colour for the two-day rallies in a show of defiance.

In July, the Wall Street Journal published reports that $700m was deposited into Najib’s private bank account. Najib has said the money was a political donation from another nation that he didn’t identify.

Amid public calls for Najib to resign and inner-party pressure, Tourism and Culture Minister Nazri Aziz told Al Jazeera he was confident Najib would continue to lead into 2018 elections.

“Don’t talk about winning with a big majority, those days are over because with the internet people are being misinformed. There has been a lot of abuse of social media,” Nazri said.

He insisted that Najib had done nothing wrong in accepting and putting the $700m into his account.

“What is said to be scandal is not actually scandalous. It is not wrong to receive a donation, and to me it is more transparent to put it in the bank than to accept cash. We do not have a law in this country on how political parties collect their funds,” Nazri said.

Najib had come to power in 2009 promising wide-ranging reforms, including scrapping the colonial-era Sedition Act. But six years later, it is still being used to charge activists, opposition politicians, and journalists.

A local expression among Malaysian civil society, “We have freedom of speech here, just no freedom after,” expresses the frustration they feel.

Organisers of recent protests are being investigated under Section 124C of the penal code, which refers to an “attempt to commit activity detrimental to parliamentary democracy” and carries a maximum of 15 years’ imprisonment.

While Malaysia’s traditional media is under a strict system of government licensing, online media that remains unregulated has increasingly come under pressure.

In June last year, Najib and the ruling party sued Malaysian independent website Malaysiakini for defamatory comments made by its readers and posted on its site. It was the first time a sitting prime minister has sued a news organisation.

Malaysiakini was launched in 1999 during the last major protest movement against the then-government of long-serving leader Mahathir Mohamad.

Editor-in-chief Steven Gan told Al Jazeera the government was trying to “roll back the clock” on press freedom.

“When we started Mahathir was in power, media was not free. Political suppression was definitely much worse than it was today. People on the street were afraid to speak out,” Gan said.

“During the premiership of [Abdullah Ahmad Badawai – 2003-2009] we saw an opening up. Now there is definitely an attempt to go back to the bad-old days of Mahathir. But Malaysians will not take it easily.”

In the past, Malaysiakini has come under denial-of-service cyber-attacks.

In the lead-up to the recent rallies, Malaysiakini developed a new phone application that helped it and organisers send information through an auto-updating message service designed to be accessible at large gatherings where mobile connection is scarce.

In March, news site the Malaysian Insider had its offices raided and five journalists and editors were held overnight over an alleged error in a story. They were later released without charge.

Its Chief Executive Jahabar Sadiq told Al Jazeera he believed they were detained “as a warning, ‘If you don’t tow the official narrative, more will happen to you'”.

In July, its partner print publications The Edge and The Edge Financial Daily had their printing licenses revoked after reporting on the $700m donation scandal.

Government Communications Director Abdul Rahman Dahlan was asked by Al Jazeera to comment on media clampdown allegations. A response was not received by publication time.

Social activist and media academic Niki Cheong told Al Jazeera the next few months would be telling for the country’s online freedom.

“It’s 50-50 [whether things will get worse]. They are threatening a lot of clampdowns,” Cheong said.

“But we have to give the government credit, they are not stupid people. So they have started closing down the websites, but not the social media sites, because if you remove someone’s Facebook the whole country will revolt.

“Whereas if you just close a few websites, one newspaper, you’ll only get a bit of noise,” he told Al Jazeera. 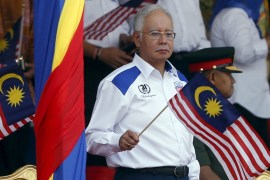