But when you reach the last one on the right, Aguila’s door, you are greeted by a sickly green paint-job bordered by a muted pink. Nothing is normal with the outspoken frontman.

“This is a space free of communism,” Aguila, 45, firmly informed Al Jazeera as he began an interview at his home, which also serves as a do-it-yourself recording studio. It was built because “nobody will record us. We’re completely independent. The Castros can’t lay a finger in here,” he said, referring to the Cuban government.

PPR doesn’t mince words when it comes to vocalising opposition towards the Cuban leadership. The band’s repertoire includes songs addressed to former President Fidel Castro, with lyrics saying he’s “a tyrant” that no one can abide.

While the government may not have a finger inside, it maintains a watchful eye outside. Standing in the Cuban heat and humidity, Aguila motions towards an out-of-place security camera pointed in his direction.

“They installed that to monitor us after we gave a concert on this balcony,” he said nonchalantly.

“They want you to be afraid. If you raise your voice, [the authorities] want you to know they can do whatever. They watch you, they harass you, and then they arrest you.”

The punk rocker has been arrested multiple times. In 2003, as his music was becoming more political – partly because of the experience of his daughter going through what he calls “indoctrination” in Cuban schools – an undercover policewoman asked him for narcotics. When he delivered, he was promptly arrested.

After serving a two-year sentence, he became even more anti-Castro. Three years later, he was arrested again on the charge of “dangerousness”, a tool that allows Cuban authorities to pre-emptively apprehend those whom they suspect will engage in rebellion.

Activists and dissidents including Damas de Blanco , a group that organises marches with the loved ones of political prisoners, campaigned for his freedom and he was released shortly thereafter. “More determined than ever” to speak his mind.

Aguila had an altercation with police this past May, while placing posters around Havana “promoting the release of [his] brother-in-arms” Danilo Maldonado, a Cuban graffiti artist and human rights activist who goes by the name “El Sexto”.

Maldonado was deemed “the most persecuted artist” in Cuba by the Cuban Institute for Freedom of Expression and Press. The group reported the Cuban Political Police, a special division that deals with dissidents, has arrested Maldonado on multiple occasions in order to impede his artwork and demonstrations.

His protests are known to be unforgiving of the Castro regime, and the latest was no different: On Christmas Day 2014 Maldonado painted two pigs green, wrote the names “Fidel” and “Raul” – the names of Cuba’s two revolutionary presidents – on their sides, intending to march them to the centre of Havana.

However, the artist was apprehended shortly after leaving his home. For the last eight months, Maldonado has been held in a Cuban prison without charge.

To Jose Luis Martinez from the Foundation for Human Rights in Cuba (FHRC), this proves that surveillance on the socialist island is omnipresent.

“A lot of the surveillance is done either by neighbours or state security monitors, who could just show up across from your house and monitor your activity all day,” he said. “We know of activists having their cell phones cut off during demonstrations. The government keeps track of anyone it considers dangerous.”

FHRC sponsors 26 political prisoners, the majority of whom are in jail for expressing their opinion and advocating for democratic change, according to Martinez.

Cuban authorities made promises that Maldonado would be released on August 24, but he still sits behind bars. He has been on a hunger strike in protest ever since, and Martinez said his condition is “very serious”.

In recent years, the profile of Cuban art has risen, as well as its artists. Private galleries are now legal, and some hope to see a rise in business as detente between the United States and Cuba continues.

Most of these artists are not making political waves, as Article 39 of the Cuban constitution states that ” artistic creativity is free as long as its content is not contrary to the revolution”.

Rafael Almanza, a 58-year-old poet and visual artist who resides in Camaguey, told Al Jazeera not all art must be political. “Maybe [an artist] isn’t drawn to protesting against the government, and no one has to. What’s important for an artist is sincerity.”

But the poet said as long as artists continue employing  cuentapropista licenses, governmental permission to open small-scale businesses, sell artwork, services, and other goods to improve their quality of life, they are engaging in a form of protest.

“This is the antithesis of the Cuban government; it’s an admission that their way is incorrect,” Almanza said.

Almanza supports the efforts of Aguila, who has continued campaigning for the release of Maldonado in spite of continued arrests and harassment, going as far as to record a music video for the cause.

Back at his apartment, the bushy-haired singer Aguila said he has no choice but to strive towards freedom of expression, in spite of constitutional limits.

“If I think that the government [deserves criticism], I should be able to say it however I want. The problem is that there is only one ideology allowed, the pro-Castro ideology. But Cubans are very diverse in their viewpoints.”

“The truth is that for many young people, no matter what they say, their only hope is to leave. I’ve left and I’ve come back because I want Cubans to have the same opportunity to express themselves here as kids do in other countries.” 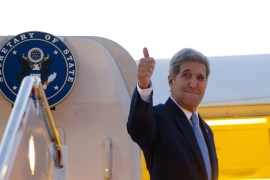 US flag raised at embassy in Cuba after 54 years

Taking part in flag-rising ceremony in Havana, John Kerry becomes first top US diplomat to visit the island in 70 years.