Gaza – In a small neighbourhood in downtown Gaza, residents are seeing a flash of hope.

With the help of a local institute, the community has transformed its walls, houses and alleys into bright expanses of colour, beautifying their neighbourhood with paint and messages of positivity.

In one neighbourhood, called Al-Zaytoun, walls have been painted over with bright purples, oranges and greens, sometimes with stencilled flowers and words scrawled across.

The initiative is seen as something different and unusual for a society traumatised by war, drawing the attention of many residents in the Strip.

Sitting among the flowery spillage of her neighbourhood’s terrace, where residents have planted a small farm of tomatoes, watermelon, eggplant and arugula, 19-year-old Mais Naief described the positive effect that the recent splashes of colour have had.

“If you come at night, you’ll see the lights and Ramadan games played by children in the streets. It’s a great atmosphere,” she told Al Jazeera.

“The situation here was tense last year. We saw the massacre of Al-Shujayea from our windows,” she added. “People now want to replace these memories with celebration, colour and joy. We decided to celebrate Ramadan in our own way.”

The colourful neighbourhood is located in the most populated area in the Gaza Strip. For many, the project has been a message of hope and positivity for the district.

The initiative can be traced back to one 58-year-old resident of the neighbourhood, Abu Abdullah, who decided to paint his house in snatches of bright colour at the beginning of 2015.

His choice in scenery was so popular that three of his neighbours decided to follow suit, painting their houses as well.

Gradually, the four men managed to convince the whole neighbourhood to join in, until “the elderly, the young, the guys and girls all participated”, according to Abu Abdullah.

According to Emad Nayef, 44, the group collected money from each house to buy the needed materials.

He believes that a colourful neighbourhood is a salve for the psychological trauma the war spread through the Strip, where 90 percent of parents report that their children suffer from a feeling of constant fear, according to the charity Save the Children.

“We want to step out of our state of blackness,” Nayef said. “We don’t want to live a life imposed on us by the [Israeli] occupation.”

The project has drawn participants from the very community it seeks to beautify. Abu Abdullah, sporting a shirt splattered with colourful paint, spoke of how chipping in allowed him to contribute to building a more peaceful community.

“Our people need to see what relieves the soul, instead of seeing walls with unfortunate [political] slogans against each other,” said Abu Abdullah. “We want to prove that we are a great people. We love life and creativity.”

Al-Zaytoun residents also had help from the Tamer Institute for Community Education, who listened to the neighbourhood’s proposal and decided to support the initiative.

The institute supplied paint, brushes and other materials, and also sent a group of artists to help the residents decorate the walls.

They finished their work just in time for the beginning of Ramadan.

Dalia Abdel Rahman, an initiative coordinator at the institute, told Al Jazeera that this was not the first effort to beautify Gaza. The Institute had previously coloured rocks at Gaza’s seaport and beautified caravans for displaced people in Khuzaa.

“We consider spreading colours and beauty to people, and letting them colour their own houses a success for us,” said Abdel Rahman. “[The neighbourhood] presented their idea and I liked it and promised to help … It won’t stop with their houses only.”

On July 11, the Institute implemented a new graffiti project for other spots in Gaza, including an amphitheatre and park in the eastern district of Shujayea, which experienced heavy tank and artillery shelling from the Israeli military that left 72 people dead last year.

According to Faten Al-Haddad, a 24-year-old mother of four children, the initiative has had a particularly profound effect on the neighbourhood’s children. “It made them more willing to play, clean and go outside,” she said.

Another parent, Mohammed Nayef, 30, added that the holy month of Ramadan was a fitting time for such a project. “We’ve managed to light the neighbourhood and decorate it with Ramadan lanterns and shiny lights.” These days, he added, a traditional Ramadan drummer, called a misaharati in Arabic, comes to wake people for prayer and to play with the children.

“The scene was bleak – it reminded us of devastation,” he said. “So we’ve created our own positive zone.” 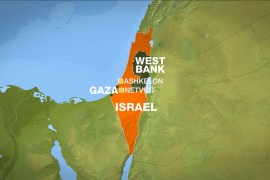