Anse-à-Pitres, Haiti – You hear nearly as much Spanish as Kreyòl in the camps where hundreds of people are taking refuge in eastern Haiti.

Some don’t even speak Haiti’s unique language. It is a sign of how much time people have lived in the Dominican Republic. Some say they moved with their parents to the Dominican Republic as children. Others say they were born there. Most people we talked to have spent years working and raising families across the border. And dozens we met said they were deported by Dominican authorities.

At a growing camp in Anse-à-Pitres, in dry southeastern Haiti, a local pastor told us he started counting arrivals a couple of months ago. After he had written 160 names in his notebook he gave up.

There’s nothing here, no work, no opportunity. Politicians just stuff their pockets full of our money

“Every day the number was growing more and more. So finally I stopped counting,” said pastor Toussaint Eugene.

“When the migrants got here they were in very bad shape. You could see clearly that they were forced to come here. They arrived after getting arrested.”

Joanis Beaunis arrived at the camp two months ago.

He says he was born in the Dominican Republic to Haitian parents. He came to Haiti once as a child. His wife Antonia had never been to Haiti before. They both said they were rounded up with others and driven to the border. Separated from their young children, friends agreed to look after them for now. There’s little sign they’ll be seeing them soon. The couple can’t cross back to the Dominican Republic and their kids don’t have the required documents to come to Haiti.

We met many people suddenly separated from family. Some are already talking about going back to the Dominican Republic to reunite with loved ones and look for work.

Fanet Joseph doesn’t know when but as soon as he gets enough money together he will try to cross back to the Dominican Republic. Last time he went with a group of men at night. No-one stopped them. In the Dominican Republic he had steady work on a farm and was paid on time every week. In Haiti his prospects are bleak.

“There’s nothing here, no work, no opportunity. Politicians just stuff their pockets full of our money.”

These people have arrived – against their will they say – to a country that is unable and apparently unwilling to ease their suffering.

There is a competing narrative.

The Dominican government told Al Jazeera that no matter what people say at these camps, they have not deported a single person since last month’s deadline passed to file the paperwork to stay. They insist that 37,000 people have “returned voluntarily” to Haiti since that deadline on June 17.

There is no way of independently verifying that number or whether every one of them came of their own free will.

Meanwhile, the Organization of American States has sent a delegation to the shared island. They’re visiting camps and other sites in Haiti where people who were living in the Dominican Republic are taking shelter.

They’re even planning to visit the camp at Anse-a-Pitre where we met Joanis and his wife. It’s hard to know if their visit will have any impact. Will they be able to tell the people taking refuge in that scrubland that help is on the way?

On Thursday, before we left the camp, we lent Joanis our cell phone to call his kids. He got a hold of the friend taking care of the children. His first words were, “I’m alive, I’m alive.”

Before his friend could pass the phone to the kids, the signal dropped. Who knows when he’ll get a chance to speak to them again. 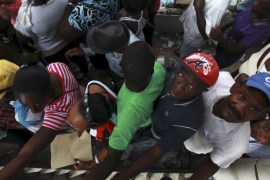 Many unsure if they should await government decision on residency status or cross border to Haiti with their belongings. 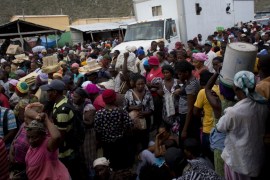 Proving legal right to stay here is no easy task for both Dominicans and Haitians born in shacks and lacking documents. 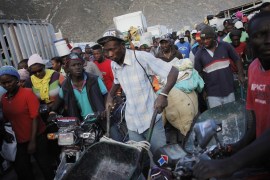 Haitians in the Dominican Republic in legal limbo

Tens of thousands of Haitians born in the Dominican Republic are at risk of expulsion.