The Syrian border town of Jarablous could soon become a battleground and that battle could change the front-lines and the balance of power in territories outside the control of the government in northern Syria.

Jarablous is controlled by the Islamic State of Iraq and the Levant (ISIL). Its flag is hoisted just a few metres from the Turkish flag at the border crossing.

A fence is what demarcates what has been a quiet frontier for years.

Just 100 metres from where we were standing, we could see a bulldozer digging trenches around the town’s perimeter. A few days ago, ISIL fighters were filmed planting explosives.

The group is preparing for war.

The US, which leads the anti-ISIL coalition, praised the capture of Tal Abyad which it said was the group’s main route to bring in foreign fighters and supplies to its de facto capital Raqqa.

The YPG now has its sights set on taking the town.

The coalition has provided the Kurds with air cover in previous operations and it is likely to do so in any new offensive against ISIL – leading some to suggest that it prefers the YPG over the Turks as border guards.

A few weeks ago President Barack Obama was highly critical of Turkey, accusing it of failing to stop the flow of foreign fighters, a charge officials here said was baseless.

A possible push by the Kurds into Jarablous is causing concerns in Turkey. It believes the YPG has another agenda apart from fighting ISIL. President Recep Tayyip Erdogan accused the Kurds of wanting to capture Jarablous to link its territories in the northeast with the Kurdish enclave of Afrin in Aleppo province further west and eventually declare a state.

The Turkish government is promising to prevent that. Reinforcements have been sent to the border and officials say all options are on the table. Pro-government media have been reporting a possible cross-border operation that would involve creating a buffer zone in the Jarablous region.

Why is this region strategically important?

It is not far from the town of Marea in Aleppo province which has become a front-line between ISIL and Syrian opposition groups.

Turkey doesn’t just want to prevent Kurdish expansion, it wants to ensure the Syrian rebels who it supports continue to hold the northern countryside of Aleppo and its main border crossing, Bab al-Salameh.

If they lose that territory to either ISIL or the YPG, it would weaken them in their fight against the Syrian government.

Turkey has long expressed its frustration with the coalition’s failure to focus on targeting President Bashar al-Assad’s forces.

Many believe Turkish officials are raising the possibility of intervention in Syria to pressure the West to change its policy.

Ankara is also worried about the expanding cooperation between the coalition and the YPG and would like the US to stop supporting the group.

The tensions could complicate the anti-ISIL campaign.

The YPG has been the only viable and reliable partner for the coalition on the ground in Syria but there are limits to what the Kurds can or are willing to do.

Syrian Arab groups say the YPG is not only fighting for what they consider to be Kurdish territory or “Western Kurdistan” but cleansing their newly captured areas from ethnic Arabs.

And if the YPG pushes deeper into Arab majority areas under ISIL’s control – it could mean yet another conflict in Syria’s war which already has many different fronts. 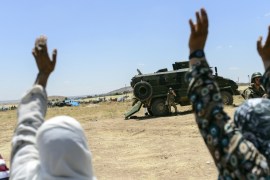 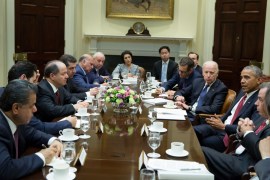