Amsterdam, Netherlands – Mathieu Ngudjolo Chui became the first person acquitted by the International Criminal Court (ICC) at The Hague in December 2012 after facing charges of crimes against humanity.

Ngudjolo was accused of having ordered an attack on the Congolese village of Bogoro in 2003 that killed 200 people. Victims were reportedly burned alive, women were raped and taken as sex slaves, and babies thrown against walls.

Prosecutors brought charges of war crimes and crimes against humanity against Ngudjolo, 44, the man whom they considered the leader of the Nationalist and Integrationist Front (FNI), a rebel movement in eastern Democratic Republic of Congo.

After several years in the dock, ICC judges found him not guilty on all counts. The presiding judge stressed, however, the acquittal did not mean the court felt no crimes were committed in Bogoro.

Ngudjolo was released from the ICC’s detention unit in December 2012, and in February 2015 the appeals chamber upheld the acquittal.

Al Jazeera recently spoke to Ngudjolo about the ICC and his time in prison – the first time he addressed the media since his trial.

In May, the Netherlands – the host-country of the ICC – expelled Ngudjolo to DR Congo following the rejection of his asylum requests. He is currently in the capital, Kinshasa, Ngudjolo said in an email to Al Jazeera after this interview.

Al Jazeera: You were accused of grave crimes including murder, rape, sexual slavery. What were the circumstances of those allegations?

Ngudjolo: I can only repeat what I said during trial: I’ve not been involved in those crimes. I was a nurse so I don’t know why the ICC prosecutor decided to indict me. There were people who were much more powerful. The leader of the FNI, [Floribert Ngabu] even testified as a witness, but no charges were brought against him. The Congolese president [Jospeh Kabila] was never indicted either.

Al Jazeera: You were in the ICC’s custody for almost five years. What was life like in the detention unit?

Ngudjolo: There was not much free time. I had to work a lot on my defence. It’s a complex case and it took a lot of time to prepare for trial. After the hearings I was doing sports, mainly fitness and tennis. Sometimes we played football. The inmates of the Yugoslavia tribunal were separated from us, so we had teams and sometimes played against each other. But it was not the place I belonged to. There is not such thing as a good prison.

Al Jazeera: You shared space with other inmates including Thomas Lubanga of the rival Hema ethnicity and the first person convicted by the ICC. He was seen as an enemy of the FNI. What was that like?

Ngudjolo: When I arrived in 2008 it was calm because there were not many people. Lubanga and Charles Taylor [ex-president of Liberia] were there already; Jean-Pierre Bemba [ex-vice president of the DRC] and others came later. But there were no problems at all. Never. At night we all had dinner together. We sat at the same table. We had conversations about Congo, the news, many different things. But usually we didn’t talk about our cases.

Al Jazeera: What did you do when you were released from prison?

Ngudjolo: After the acquittal I applied for asylum in the Netherlands. The Dutch authorities wanted to deport me to Congo immediately but agreed with the ICC that I can stay until the end of the appeals phase. The court paid the rent for an apartment and food. But it was not a lot. I was free again so I visited Rotterdam and Amsterdam for example. On Sundays I went to church.

Al Jazeera: You are wearing a small pin with a cross that you had during the trial. What does it mean to you?

Ngudjolo: I’m Christian and my belief is very important to me. In the detention centre, I prayed a lot and went to the weekly service there. It helped me to accept the situation because I knew I’m in God’s hands – whatever would come. After I was released I did volunteer work for a congregation and helped to stage a musical. One day a week I volunteered at a non-governmental organisation which supports homeless people.

Al Jazeera: How do you view the ICC?

Ngudjolo: I still support the court. The world needs a strong ICC and I’m the first one to back it. But currently it is not functioning well. We need people and politicians who support it so the court can prosecute everyone. At the moment many people are not prosecuted for political reasons.

Al Jazeera: You applied for asylum in the Netherlands and for a humanitarian visa in Switzerland. Both were rejected. How do you see your future?

Ngudjolo: I don’t know what will happen. I’m disappointed by both the Dutch authorities and the ICC. I was arrested immediately after the acquittal was confirmed and put in detention again [pending deportation by the Dutch] so it feels like a reprisal for the acquittal. 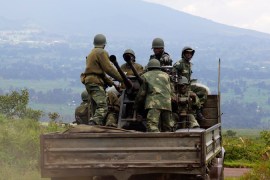 Congo army says rebels forced out of towns near city of Goma in second day of fighting as UN and US call for restraint. 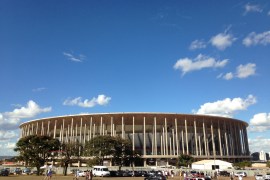