Lagos, Nigeria – It’s been a month since protesters in Burundi began their campaign to block President Pierre Nkurunziza from seeking a third term in office.

A May 13 coup against the 51-year-old former sports professor failed, but demonstrators are rolling out on a daily basis, calling for him to step down.

The tiny Great Lakes nation of 10 million people is one in a string of sub-Saharan countries in which popular protests have recently taken hold, reflecting growing intolerance for ineffectual leaders with an appetite for extending their time in power.

In October, Burkina Faso’s Blaise Compaoré was toppled by popular uprising after 27 years in charge. He had planned to amend the constitution and prolong his presidency, but is now holed up in the Ivory Coast.

By January, demonstrations had erupted in the troubled Democratic Republic of Congo, prompted by a draft law that critics said would enable Joseph Kabila to extend his 14-year rule. Opposition members called off the demonstrations after it was stripped of a provision that risked delaying the vote, scheduled for next year.

Over the past weeks the unrest has spread to neighbouring Burundi.

Nkurunziza has been in power for the maximum period of two five year terms, but a court backed his candidacy earlier this month.

Protesters claim that his attempt at re-election violates the constitution, and a peace deal that ended a civil war in 2005.

Power to the people

Africa has a long history of uprisings.

Bullets, not the ballot box, have often been used to sweep away old dictatorships. Yet popular demonstrations have become more common in recent years, said Phil Clark, a reader in international politics at SOAS in London.

“There is more momentum for protests like these,” he argued.

“That is partly to do with social media making governments more accountable. But partly it is because countries are learning from each other; taking inspiration from each other’s protest movements.”

Activists who had participated in uprisings in Senegal and Burkina Faso were deported from Congo in March, following involvement in a pro-democracy event.

Revolutions in North Africa, which started in 2010 when a Tunisian trader set himself on fire in protest over the authoritarian regime, may also have exerted some slow-burning influence on the rest of the continent.

“The Arab Spring has helped to give impetus to public protest against African governments, and to show how social media can be used to mobilise protesters,” said Paul Whiteway, who heads the London office of the diplomatic advisory group Independent Diplomat.

Much of the indignation is linked to poor performance by long-standing leaders.

“Economics and lack of opportunity for the youth are major factors,” said Alex Vines, head of the Africa programme at the think-tank Chatham House.

“Though there’s also just the issue of longevity.”

About 6.8 million people in Burundi live in poverty, based on 2011 World Bank figures.

Burkina Faso and the Congo both languish at the bottom of the UN’s Human Development Index.

Job creation is failing to keep pace with rampant population growth, particularly among the youth, who often resort to hawking goods in order to make ends meet.

By 2050, Africa’s billion-strong population will have more than doubled in size according to the UN. Over the same period, the International Monetary Fund projects that the working age population will triple to 1.25 billion.

Millions of teaching positions, and almost half a billion jobs, will have to be created to keep pace with that growth. Without those, young, frustrated populations will prove a major problem for failing leaders.

In some cases, recent protests have ushered through meaningful democratic progress.

Demonstrators came out victorious in Senegal in 2012, when President Abdoulaye Wade was ousted after controversially bidding for a third term.

In Burkina Faso, the military government instated in President Compaoré’s place promises to transfer power back to a civilian government later this year.

“The people have won,” the president of the Congo’s opposition Union of the Congolese Nation said after the controversial electoral law was revised in January.

But the growing appetite for political mobilisation does not necessarily translate into a more democratic continent. In many other instances, strongmen are simply growing increasingly adept at stamping out uprisings.

“Although some of these regimes have been in trouble, nine out of the 20 longest serving presidents in UN member states are in Africa,” Whiteway said. “There is still a hard core of leaders who’ve been successful at keeping themselves in power.”

It is still unclear whether Kabila will attempt to amend the constitution and run for another term in Congo. His tactics against protesters have been heavy-handed. Dozens of people were killed in January during a crackdown by security units. Human Rights Watch called their use of force “unlawful and excessive”.

Internet and mobile networks were cut in an effort to kill communication between protesters.

Lethal force is similarly used against protesters in both Uganda and Sudan.

In 2013, 170 people were killed in demonstrations against the military regime of Omar al-Bashir.

“Instead of investigating these crimes, it’s using brutality and violence to silence perceived opponents.”

Despite demonstrations over constitutional limitations, Togo’s polygamist president, Faure Gnassingbé, won a third term in April elections. His family has been in power since 1967.

In Burundi, Nkurunziza promises to press ahead with June elections, albeit delayed by a week, raising fears of renewed ethnic violence between Hutu and Tutsi communities.

“A lot of leaders believe that they can weather these storms, if they can keep the military on [their] side, and if they have weak courts which they can lean [on] to extend their terms,” Clark explained.

“The public can protest, but if there isn’t a strong separation of powers, if the president can pressure the military and judiciary, they are able to withstand a lot of the popular pressure,” Clark said.

That theory will be further tested as elections approach in a string of African countries in the next 18 months. 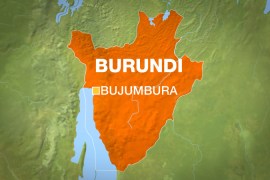 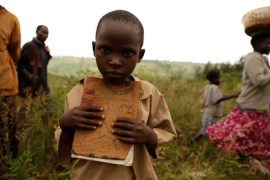 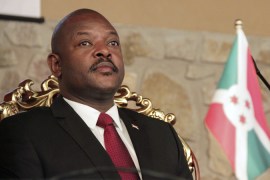 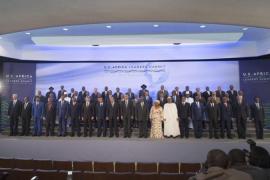 The US-Africa summit trails behind Africa engagement initiatives led by other global powers.