Bentiu, South Sudan – Tens of thousands of civilians have been displaced and an unknown number killed in renewed military onslaughts against rebels in parts of war-ravaged Unity State, according to survivors.

“I saw soldiers in military uniform. They burned our homes. They put people inside and then they burned it,” said Nyanuoka Tager, a mother of six children, through a translator. “They raped a young girl and then killed her. I saw three women shot dead in front of me. Then they stole our cattle and goats.”

Nyanuoka escaped her village of Boaw in South Sudan’s tortured Unity State after the attack one week ago.

She ran with her children, leaving behind all her belongings. One child, a boy of 11, was lost in the bush after they fled. He is still missing days later.

The family walked for seven days and Nyanuoka fed her remaining children waterlily roots and leaves until they finally reached Bentiu, the state capital, last Wednesday, and the relative safety of a United Nations-protected displacement camp.

Since the end of April, South Sudan’s government forces (SPLA) have launched major assaults on opposition-held areas in Unity in a bid to reclaim territory and push back the rebels before the onset of the rainy season in June.

The UN mission in South Sudan estimates at least 100,000 civilians have been displaced and more than 300,000 affected by an almost-complete suspension of humanitarian activities caused by the fighting in recent weeks.

On the way to Bentiu, flying by helicopter over Koch and Leer counties in Unity, one can see smoke rising from villages and black smudges that appear to be torched huts.

The UN said in a statement survivors are reporting gross violations of international humanitarian law, but human rights monitors have been denied access by the SPLA to verify allegations of atrocities.

South Sudan has denied its forces are perpetrating violence against civilians in the area.

“We have been under a lot of pressure from the rebels for the last month,” Garang Diing Akuong, South Sudan’s ambassador to the United States, was quoted as saying.

“Our positions in Bentiu and around Bentiu were being bombarded, shelled by the rebels, and we have kept the promise that we will keep the cessation of hositlities in place,” Akuong said.

In the last four weeks about 11,000 people have fled to the UN’s Bentiu “protection of civilians” (POC) camp, according to medical charity Doctors Without Borders (MSF), which operates a hospital there.

Bentiu POC is already the largest such camp in South Sudan and where more than 50,000 people had been sheltering in filthy and congested conditions since early 2014, when the world’s youngest nation descended into its now 17-month-long civil war.

“They are registering between 500 and 1,000 new arrivals every day right now,” a UN official in Bentiu, who was not authorised to speak publicly, told Al Jazeera.

“You see they are all women and children. We hear the men are being forced to recruit or they are being killed.”

The reception centre inside the camp is bursting. Up to 1,000 people – mainly mothers, young children and the elderly – sit in crowded lines sheltering from the scorching sun beneath sacks, buckets, and bits of cardboard.

“We have been here waiting to register for four days, there are so many people,” said Nyakenya, a young mother clutching an extremely thin and lethargic baby.

She said her village of Rubnyagai in Unity’s Rubkona county was attacked two weeks ago.

“They came in the afternoon. They burned the tukuls [grass huts], they stole cattle, and they destroyed our food supplies. I saw people killed with guns and they abducted many young boys,” Nyakenya said.

She blamed a sub-tribe from the Nuer ethnic group that has reportedly been forming militias to reinforce and fight alongside government troops.

Before the rains come

The influx of newly displaced people in Bentiu comes as the UN and partner agencies are about to relocate the entire population to an adjoining site to improve living conditions before the rains.

“It is a stressful time for the staff and the population,” Mary Cummins, a UN coordinator, told Al Jazeera.

“We have over 60,000 people currently in the [camp] and we want to see as many as possible relocated smoothly and safely before the heavy rains start next month.”

When it began raining last year the entire site became a festering swamp with the population enduring flooded conditions described by MSF as “barely compatible with life and incompatible with human dignity”.

Those making it to the camp are not spared from violence either. Gunfire can regularly be heard close to the perimeter and on Wednesday a grenade reportedly exploded inside the camp.

Armed incursions allegedly by SPLA have resulted in many wounded and reports indicate at least five deaths over the last six weeks at the camp.

The influx of new arrivals also puts huge pressure on the water supply.

Hundreds of women wait in line to collect water using hand pumps. Several girls close to the front of one line said they had been there for three hours.

“There was enough water for 50,000 people, but now another 20,000 in just a few weeks, it is too much. And also the water is very salty. It is difficult to drink,” said the UN official.

Beyond the UN base, movement of UN and humanitarian agencies is being restricted.

SPLA soldiers – at least one seemingly drunk – prevented a regular UN patrol from crossing the checkpoint into Bentiu town, a few kilometres north of the camp. The soldiers gave no reason for the obstruction.

The UN and non-governmental organisations have been forced to evacuate staff and suspend operations across most of Unity, leaving hundreds of thousands of people without vital food and medical aid, and no one on the ground to document the situation.

“We have no idea of the scale of the violence from the last few weeks,” said another UN official in Bentiu who was not authorised to speak publicly.

“Based on reports and testimonies from IDPs … we have a consistent and credible picture of large-scale destruction and grave human rights violations, although the government had indicated many times that in the case of fighting they would make efforts to minimise the impact of the violence on civilians and their properties.”

The military onslaught in southern Unity comes at the end of the dry season when food supplies are running low. It is also the height of the traditional planting season when villagers should be planting their crops to harvest and feed themselves later this year.

Instead, they are running for their lives from villages burned to the ground.

A similar picture of catastrophe is also emerging from South Sudan’s two other most troubled states.

The intensified violence is exacerbating a crisis that has displaced 2 million people and killed at least 50,000.

“For more than 17 months, women, men and children have been senselessly suffering through an entirely man-made catastrophe,” said UN human rights chief Zeid Raad Al Hussein in a statement on Friday.

“And now, over the past few weeks, the opposing parties have actually managed to make a terrible situation much, much worse. The unrelenting, indefensible conflict in South Sudan should enrage the conscience of each and every one of us in the international community.” 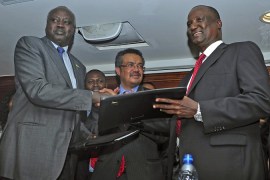