Nobel Prize winning mathematician John Nash has been killed in a car crash along with his wife, US police officials said.

The couple were in a taxi whose driver lost control and crashed into a guard rail on Saturday afternoon while driving in the US state of New Jersey, said Sergeant Gregory Williams, a spokesman for the New Jersey State Police.

The pair were thrown from the vehicle and pronounced dead at the scene, Williams said.

Nash, who inspired the Academy Award winning movie “A Beautiful Mind”, was known for his work on game theory and the mathematics of decision-making, and was awarded the Nobel Prize for economics in 1994.

Nash spent much of his career at Princeton University, where his work offered insight into the dynamics of human rivalry.

The film “A Beautiful Mind” starring Russell Crowe was loosely based on Nash’s longtime struggle with schizophrenia.

Crowe wrote on Twitter on Sunday that he was stunned by reports of the death of Nash and his wife, Alicia. 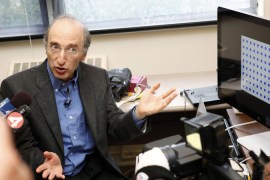 Three scientists share the Nobel Prize for Physics after discovering that the universe is expanding. 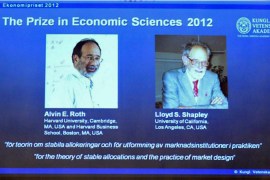 Shapley, a UCLA professor, and Roth of Harvard, share the honour for their economic engineering theory. 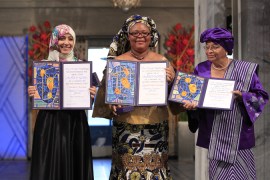 Full list of all the Nobel Peace Prize winners

Comprehensive list of Nobel Peace Prize laureates since award was instituted in 1901.