Kuala Lumpur, Malaysia – In September 2011, Malaysia’s Prime Minister Najib Razak spelled out his vision for a modern Malaysian democracy, repealing a raft of repressive laws and vowing a year later to jettison the colonial era Sedition Act, which critics said had too often been used to stifle dissent.

It appears that those promised reforms have been abandoned.

After an intense debate in parliament that went on until the early hours of April 7, the lower house passed a new anti-terrorism bill, which restored detention without trial.

A few days later, amendments to strengthen the Sedition Act were passed, again after a prolonged debate. Both were passed by the upper house last month and are expected to become law in June.

“Najib’s political space is diminishing,” Ernie Bower, from the Center for Strategic and International Studies in Washington DC, wrote in an email interview with Al Jazeera.

“It’s like he is in a box that is continually shrinking and he feels more and more constrained. This is a dangerous development.”

Najib is under pressure not only after his coalition’s poor performance in the 2013 election when the ruling Barisan Nasional (BN) lost the popular vote for the first time, but also over the finances of 1MDB, a state investment fund where Najib chairs the Board of Advisers.

Independent journalists and online media led the exposes on 1MDB, but former Prime Minister Mahathir Mohamad, who even at 89 wields considerable influence over UMNO, the party that dominates BN, has recently joined the critics.

“In order to strengthen and consolidate his position, which is at the moment slightly precarious, Najib has to appeal or, you could say, pander, to the right wing [of his party],” said Oh Ei Sun, a senior fellow at the S Rajaratnam School of International Studies in Singapore, who was a political secretary in the Prime Minister’s Office from 2009-11.

“He has to demonstrate that he means business in the sense of being in control and he has to show that he is superficially or ideologically with them.”

The government says the new terrorism bill, known as POTA, is necessary to combat the threat posed by the Islamic State of Iraq and the Levant group. Some 95 Malaysians suspected of having links to the armed group have been detained to date, according to Home Minister Ahmad Zahid Hamidi.

The Sedition Act, which has long been criticised as too vague, has been changed to remove criticism of the government or the judiciary as a seditious offence.

But clauses have been added to allow the detention of those who “propagate” allegedly seditious material, which could potentially include “liking” a Facebook page or even retweeting someone else’s tweet, according to lawyers.

Anything that could lead to damage to public property or bodily injury can now also be seen as seditious and those found guilty jailed, rather than fined.

“It may appear to be a good thing, but the fact that the law even still exists is a bad thing. It is still very vague and ambiguous and includes a lot of acts that shouldn’t even be criminalised in the first place.”

The public debate of ideas can be among the best protections against intolerance and can play a positive role in strengthening democracy and combating hatred.

Marie Harf, US Department of State

In an interview aired on TV3, a channel controlled by his party, Najib stressed that POTA was not the same as the Internal Security Act, which was repealed three years ago, and that the Sedition Act was to safeguard all Malaysians.

“This is to protect all races [and] all beliefs, not just Muslims and Malays, but those who aren’t Muslim and who aren’t Malay. That is why our country is peaceful.”

About 65 percent of Malaysia’s population is Muslim Malay with the rest made up of ethnic Chinese, Indian, and indigenous peoples.

The US, the European Union and the UN High Commissioner for Human Rights have all criticised Malaysia’s decision to amend the act rather than repeal it.

The US state department’s acting spokeswoman Marie Harf said provisions that could make the sharing of allegedly seditious material on social media, as well as increased penalties for first-time offenders were “particularly worrying”.

“The public debate of ideas can be among the best protections against intolerance and can play a positive role in strengthening democracy and combating hatred,” Harf said.

Malaysia inherited the Sedition Law from Britain, which introduced the legislation to neuter threats to its position as a colonial power. It passed similar legislation in its other colonies as well.

But while the UK abolished the offence of seditious libel and criminal defamation in 2009, and other Commonwealth countries have done so too, sedition remains a crime not only in Malaysia but also in Brunei and Singapore, where two people were charged with the offence earlier this month.

In Malaysia, the number of people detained for the offence has been rising over the past few years. From three cases in 2011, SUARAM, a Malaysian human rights group, said 44 people were held under the Act last year.

Among them was law academic Azmi Sharom, who was later charged with sedition over comments he made in relation to a state leadership crisis. He is now challenging the constitutionality of the entire law.

“The crackdown on free speech over the last year is a massive backward step that badly tarnishes the prime minister’s reputation,” Rupert Abbott, Amnesty International’s research director for Southeast Asia and the Pacific, told Al Jazeera in an email.

So far this year, at least 26 people have been detained for sedition, according to SUARAM.

Political cartoonist Zunar was charged with nine counts of sedition earlier this month and faces as long as 43 years in jail if found guilty. His trial is expected to start next month.

Held in the police cells for four days, the MP appeared in public handcuffed and dressed in the purple prison clothes that all detainees have to wear. He has not been charged.

Rafizi, who exposed a multimillion dollar scandal at a national agricultural project and is now on trial for releasing confidential banking information, said tighter laws will not stop him from questioning the government or highlighting controversial issues.

Nor does he think Malaysians, who are enthusiastic users of Facebook, Twitter and other social media, will be deterred for long.

“People will find a way,” he said in an interview at his office in the Kuala Lumpur district he represents.

“You cannot restrict the flow of information. The more you try to suppress it, the more people will find creative ways to get around it.” 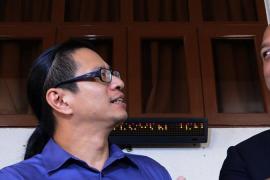 Azmi Sharom becomes the ninth person arrested this year for what many observers say are politically-related reasons. 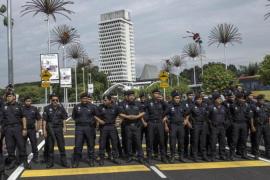 Ahead of a visit to the UN in Geneva, critics say the situation in Malaysia is getting worse. 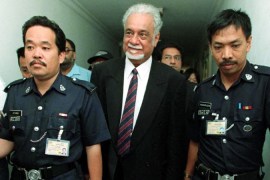