Yola, Nigeria – Seven-year-old Rada plays barefoot in front of an old house on the outskirts of Yola, a town in northeastern Nigeria’s Adamawa state. She wears a shiny yellow scarf and smiles shyly to strangers.

Nearby sits Rada’s mother, Samira, who looks exhausted. She breastfeeds her baby, who is feverish and weak.

Malaria, pneumonia and measles are common in this four-room house that hosts 57 people, including 30 children. All escaped from Boko Haram after their hometown of Michika was captured by the armed group seven months ago.

Samira’s husband was killed outside the family’s home, but the 36-year-old mother managed to strap her infant to her back and hide in the bush with her other four children.

“For three weeks we survived on wild fruits, and our children were getting sick,” said Samira, who declined to give her last name for her safety.

“At nights we would run in the villages to fetch water from the wells, but sometimes we could hear gunshots. Then we knew they [Boko Haram] were there and they would kill us.”

Since 2009, when Boko Haram launched military operations to overthrow the Nigerian government and create an Islamic state in the country’s northeast, at least 2,000 women and girls have been abducted, more than a million people have been forced to flee their homes, and some 5.6 million are in need of humanitarian aid.

Through a campaign of terror with almost daily killings, bombings, looting, burning, and abductions, Boko Haram has triggered a humanitarian crisis in northeastern Nigeria.

While Borno and Yobe states remain the worst affected, Boko Haram has also launched attacks in other parts of Nigeria, as well as in neighbouring Chad and Cameroon.

Fadi Zacharia used to run a stall selling fruit in Michika, which provided enough income for her and her seven children to survive. Now, she lives in the same overcrowded house as Samira, depending on food aid to survive.

“They [Boko Haram] came around at nine in the morning, and forced all men to come out of the houses and shot them in the head,” Fadi recalled.

“There was fire everywhere. I saw my neighbour burnt alive with her baby on her back. I ran with my children into the bush. Here I am safe, but there is no life for us and we don’t know how long we will stay.”

Those living in the house pay about $30 a month in rent, which is often paid with help from their relatives. Because they are not living in a government-run camp, they are not eligible for aid from the Nigerian government .

The displaced people here receive food aid from Adamawa Peace Initiative, an NGO, as well as from various Muslim and Christian organisations, but this assistance is not regular.

Since the escalation of the Boko Haram conflict in 2012, more than 200,000 people have sought refuge in Adamawa state, with the vast majority of the displaced families living in clusters of small houses sharing common space, or in abandoned buildings with little or no access to humanitarian aid.

The Nigerian government has opened camps for internally displaced people that provide food assistance to those living there. But many people avoid them because movement outside the camps is often restricted, and some fear for the safety of women and girls there.

As a result, families often look for shelter in host communities, where they are left to fend for themselves. An estimated 90 percent of Nigeria’s displaced live within communities, while only 10 percent live in camps.

Almost 1,500 people live in the Giroi I camp, which is run by the Nigerian government. Pikolo, the camp leader who is himself a displaced person, said many do not want to live here because of cramped conditions.

“The biggest problem is the lack of toilets and health,” said Pikolo, who declined to give his last name.

“Three months ago we had a measles outbreak that killed at least four children. The medications in the camp are not enough to cover the needs of the people.”

“Only a handful of humanitarian partners currently have a permanent presence in the insurgency-affected states in northeastern Nigeria, and access remains a significant challenge that hampers effective delivery of humanitarian assistance,” said Kasper Engborg, head of the United Nations Office for Coordination of Humanitarian Affairs (OCHA) in Nigeria.

He added the overall humanitarian response has been limited, slow, fragmented in its delivery, inadequately coordinated and not transparent.

Although humanitarian efforts are currently being scaled up, and the UN’s OCHA is increasing its field presence, funding remains problematic.

The 2014 humanitarian response plan was only 18 percent funded. And of the $100.3m that UN agencies and NGOs requested for 2015 to cover the immediate needs, only $11m has been allocated so far.

“There is insufficient funding for protection, food security and nutrition,” said Sarah Ndikumana, representative of the International Rescue Committee (IRC) in Nigeria.

“Donors want to see the concrete contributions that the government of Nigeria is also offering, as there are resources available here. There are also very few humanitarian actors in the [northeast], which concerns donors as they want to make sure the few NGOs operating are not overextending and are able to manage the scale-up.”

The Nigerian government declined to comment for this article.

Emanuel looks like any other 15-year-old as he plays with a flattened football in the dusty yard of the Church of the Brethren (EYN), a government-run camp for displaced people in Yola.

But he has a horrifying story to tell. Only three months ago, Boko Haram fighters attacked his hometown of Gwoza in neighbouring Borno state.

They ordered Emanuel and his father to step out of their homes. Then a man used a knife to slice his father’s throat in front of the terrified boy. Emanuel was forced to follow the fighters into the bush, enduring beatings and hunger.

“I was scared and thinking of my mother and my sisters. I thought they were dead, and that I was going to die soon,” he recounted. He managed to escape when a government-led air strike dispersed the militia.

“I didn’t know where to go, so I ran back home. Everything was burnt to the ground,” Emanuel said.

Alone, he walked to Maiduguri where he spent a week in a government camp before finding his mother and siblings. They were later transferred to the EYN in Yola, where more than 2,000 people live in cramped conditions.

Like the rest of the children in the camp, Emanuel does not attend school. He spends his days playing with his old football, hoping that one day he will be able to return home.

The Multi-National Joint Task Force, which consists of troops from Nigeria, Niger, Chad, and Cameroon, has succeeded in driving Boko Haram from parts of Borno and Yobe states.

But the situation remains volatile. In Adamawa state, towns such as Michika, Gombi, and Madagali have only recently been recaptured.

The horrors of the Boko Haram attacks are still visible: churches and mosques have been destroyed; public buildings, hospitals and schools have been vandalised and burned; bridges have been cut in half; the corn has been left unharvested in the fields; and no land has been planted for the rainy season.

“At the moment it is too early to talk about return, and very dangerous to force or give incentive to the people to return in their villages. The situation is still quite volatile and the safety is still an issue to be solved,” said Antonio Piccoli, head of Cooperazione Internazionale, an Italian non-governmental organisation active in Nigeria.

He added that displaced families should be allowed to cultivate some land where they are currently staying, so they will be able to feed their families.

Meanwhile, some families are determined to return to their hometowns. Adama has been living in the EYN camp with her five children since September.

Her children constantly get sick, and have been out of school for months. Adama is angry and frustrated, and has put all her hope in the new government of Nigeria to help displaced people such as her return home.

The OCHA’s Engborg told Al Jazeera the Nigerian government, in coordination with the United Nations and other partners, is developing a plan for return, and support for reintegration and resettlement, which is expected to be ready in the coming weeks.

“Return must be safe, voluntary and not forced,” said Engborg.

“We must make sure that all measures and commitments such as basic services, protection and livelihoods are in place to support resettlement. But we must also take into account the expectations, the fears and the concerns of the people.” 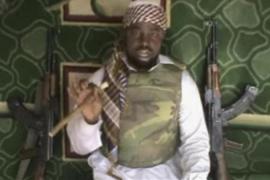 Nigeria students ‘to be released by Tuesday’

Presidential source quoted as saying everything is being done to gain freedom of female students held by Boko Haram. 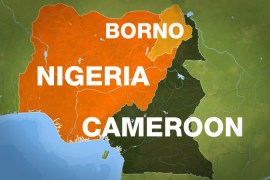