Gunter Grass, awarded the Nobel Prize for literature, has died at the age of 87, according to his publishing house.

Grass, whose works include The Tin Drum and Cat and Mouse, died in a hospital in the northern German city of Luebeck, the Steidl publishing house said on Monday.

Grass was lauded by Germans for helping to revive their culture in the aftermath of World War II and helping to give voice and support to democratic discourse in the postwar nation.

Yet he provoked the ire of many in 2006 when he revealed in his memoir Skinning the Onion that, as a teenager, he had served in the Waffen-SS, the combat arm of Adolf Hitler’s paramilitary organisation.

In 2012, Grass drew sharp criticism at home and was declared persona non grata by Israel after publishing a prose poem, What Must Be Said, in which he criticised what he described as Western hypocrisy over Israel’s undeclared nuclear programme and labelled the country a threat to “already fragile world peace” over its belligerent stance on Iran.

Grass made his literary reputation with The Tin Drum, published in 1959. It was followed by Cat and Mouse and Dog Years, which made up what is called the Danzig Trilogy – after the town of his birth, now the Polish city of Gdansk.

Combining naturalistic detail with fantastical images, the trilogy captured the German reaction to the rise of Nazism, the horrors of the war and the guilt that lingered after Hitler’s defeat.

The books return again and again to Danzig, where Grass was born on October 16, 1927 as the son of a grocer.

In the trilogy, Grass drew partly on his own experience of military service and his captivity as a prisoner of war held by the Americans until 1946.

In 1999, the Swedish Academy honoured Grass with the Nobel Prize for literature, praising him for setting out to revive German literature after the Nazi era.

With The Tin Drum, the Nobel Academy said, “it was as if German literature had been granted a new beginning after decades of linguistic and moral destruction”. 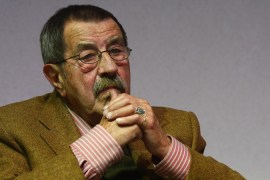 Günter Grass, Israel and the crime of poetry