On the radio when I woke this morning was some good news, from a hospital in Western Australia. An asylum seeker who’s been on hunger strike for weeks has, finally, agreed to drink some water.

But now his death is less imminent, it’s likely the media interest in the case will disappear entirely.

I’m part of that media. So here’s my conundrum. Should I write about a distressing call about a different case I received last night? I’ve been trying to decide all day.

Writing, I’ve decided, is the lesser of two evils:

Samar Elzeiny was crying on the phone: “What can I do, Andrew? What should I do? Help me, Andrew, help me.”

Elzeiny said she’d had a phone call yesterday from her brother, Faisal, who is a detainee at the Manus Island detention centre.

He’d said that existing health conditions – concerning his head, eyes and legs – were getting worse. He said he saw a doctor on Monday (on Manus Island, his sister thinks) but the doctor would not refer him for specialist treatment. Faisal told the doctor that if he did not receive proper medical treatment by 3.30pm Tuesday he would swallow 20 razor blades. He showed the doctor 20 empty plastic packets to prove he had the blades. It would be the second time he’s swallowed razors.

I first met Samar in January when her brother had done something similar.

Should I be writing this?

So a second-hand threat of suicide by a detainee at a detention centre established and paid for by Australia, but in Papua New Guinea and under their jurisdiction. A place where it is very hard to get accurate information from; where there is very little accountability.

I have no way of knowing how serious Elzeiny’s health conditions are; nor how serious his threat of suicide is. It may be his mental health is worse than his physical health; maybe neither is as bad as his sister is making out. Maybe what he – and she – really want is attention. And here am I, giving it.

Should I be writing this at all? Media attention piqued when suicide threats are mentioned might encourage more threats – or worse.

But with an absence of information and the inability to do more than the most basic of fact-checking, keeping quiet about potential issues when they come to me seems worse than writing about them; writing seems the lesser of two evils.

I sincerely hope Faisal’s threat isn’t serious. But I also wish he didn’t have to make it to get any attention at all.

I contacted the Department of Immigration and Border Protection in Canberra about Faisal Elzeiny. They would not comment on his case specifically but did give me the following statement:

“Transferees at the Manus Island Regional Processing Centre (RPC) have access to clinically recommended care that is broadly comparable with health services available within the Australian community.

Medical specialists visit the RPC as required. Specialist services are supplemented by a tele-health service.

Decisions on medical transfers are based on clinical advice from the contracted health service provider, International Health and Medical Services (IHMS).

Any transferee who threatens or undertakes self-harming behaviour receives clinically guided support. The higher the assessed risk of self-harm, the higher the level of engagement and support.

Threats or actual incidents of self-harming behaviour will not influence the outcome of an individual’s immigration case.” 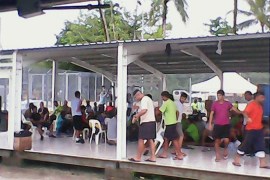 Exactly what the situation is like for people in the detention camps is very hard to gauge. 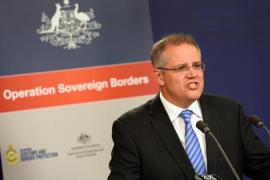 Fences knocked over and bunk beds used as weapons during the incident, on Papua New Guinea’s Manus Island.