Kedjom-Keku, Cameroon – A cushion of leaves sits perched neatly atop cross-cutting branches, pulled in place by the creature that built the nest nearly 2,000 metres above sea level in northwestern Cameroon.

Beneath, a stream of cold water rushes through stones coated in lush moss and bird droppings from the forest above. The sun’s rays pierce through the forest canopy with bright spots dancing on the thicket like a disco ball.

As a touraco’s song announces the arrival of midday in the distance, Martin Mikeš, a Czech forest conservation worker, and his team of volunteers gather around the tree with the nest and unstrap their backpacks.

“This should be less than a month old, about three weeks,” Mikeš said, clearly excited by the discovery of another chimpanzee nest not so deep in the Kedjom mountain forest – a place that was once a biodiversity marvel, but is now threatened by the expansion of farmland, grazing fields, and bushfires.

Wild chimps are endemic to the tropical forests of Africa. But their population is believed to have been reduced by as much as 66 percent over the last three decades. Some wildlife experts fear chimpanzees could become extinct in the next 50 years, as mining, logging and agriculture deplete their habitats.

In its conservation literature, the ministry of forestry and wildlife said there could be “six to eight individuals” roaming the Kedjom mountain area, probably members of the Pantroglodytes ellioti sub-species – one of the most endangered in Africa.

Trackers have regularly spotted nests for more than 15 years, and inhabitants from surrounding villages often report chimp invasions on their farms.

But the hardest evidence yet of their existence is 20 seconds of footage from December 31, 2013. It shows what Mikeš and his team believe to be a large chimpanzee male walking through the forest, less than 200 metres from farm fields and residences.

Researchers are still trying to fully understand the animals and have collected dung and hair samples for laboratory analyses. But patchy data from studying nests and migration routes has already surprised the animal detectives.

Unlike the Pantroglodytes elliti, or any other sub-species for that matter, the chimps living in the Kedjom forest build nests close to human settlements and eat cultivated crops, especially fresh maize, which is highly unusual.

“We may be dealing with a new sub-species of chimpanzees,” said Jude Viban, a government conservationist at the Mbi Crater Sanctuary, who collaborates with Mikeš’ organisation, Kedjom-Keku, an NGO.

It could also be that the chimps have been forced to adapt to their new reality, trapped in small patches of forest by encroaching farmland.

Mikeš said he hopes that more video footage will tell them more about the animals. After the latest nest discovery, he proceeded to install more cameras throughout the area. Unfortunately, nine cameras in all are not enough to scan the entire area.

“We do not have enough funding to monitor all [forest] fragments at once, making it difficult to know exactly where the chimps are at any given time,” said Viban.

Reaching the chimp nests involves a steep climb. Most of the journey is done on foot, usually up to six-hours of climbing and descending trails flattened by repeated use.

The trek is tedious but it gives the researchers the opportunity to have a better sense of the threat their rare chimps face.

Years of farming and grazing – which often involves combining heavy tilling with slash-and-burn forestry practices – has reduced the amount of arable land, pushing farmers closer and closer to the few remaining forests.

Every day, more trees are cut down and set on fire, said Mikeš, stopping at a clearing where just a week before there was thick bush.

“They tell you their grandparents have been farming here, but this is primary forest,” he said, his voice rising in anger. “This is forest and it belongs to chimpanzees.”

The Pantroglodytes ellioti, also known as the Nigeria-Cameroon sub-species, is considered the most endangered, particularly because of human population density in eastern Nigeria and western Cameroon, where they are endemic.

Despite the discovery of a potentially new chimpanzee sub-species on Kidjum mountain and the threats they face, the forest is still not a protected area, which means clearing and hunting are not criminal offences.

Existing laws prevent individuals from clearing forest within 50 metres of waterways, but there is no one up the mountain to enforce such laws, said Mikeš.

Instead, the ministry of agriculture is building a new road up the mountain to help farmers bring out their harvest. Viban said he fears the road will open up the forest to even more encroachment and increase pressure on the few chimps here.

The absence of land-use planning and governance policies in places such as this often means there is a clash between conservation and other activities like agriculture and hunting, said Agustine Njamnshi of the Bio-resources Development and Conservation Program based in the capital, Yaounde.

“Most community members still see conservation as a threat to their livelihood activities, because they do not yet have direct benefits from our actions,” said Viban.

Mikeš said the goal is to eventually create a corridor linking the isolated forests to give the chimps more room to roam. Researchers have started mapping the area, tracing forest fragments, grazing areas and farmland.

But it’s going to be difficult to bring to fruition, he admitted, without the cooperation of local people. 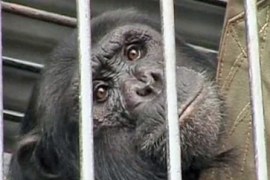 Video: Uganda fights to save chimps

Chimpanzees remain a target for illegal traders, at least 5,000 are poached yearly. 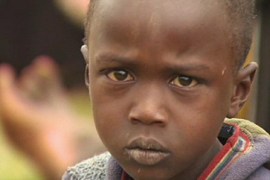 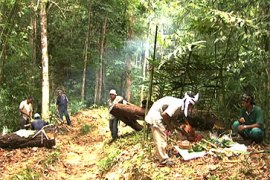 Sarawak activist talks to Al Jazeera about the effects of deforestation. 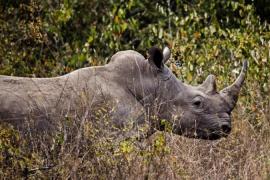 The world must see more commitment from the international community in combating wildlife trafficking.