Martinsburg, United States – Jenny is preparing to leave for good and says she’s already cut off most of her friends to remove herself from the world of heroin addiction she once inhabited.

Introduced to the drug by a close friend in high school because it was cheaper than pain pills, her habit quickly escalated.

“All I was concerned about was getting high,” Jenny said, recalling the times she overdosed with disbelief.

Her drug dealer dumped her in a bush at a pharmacy once when she overdosed. He told her afterwards he’d thought she had died.

“They were so casual, so nonchalant about it. The sad thing is I kept buying from them,” said Jenny, who like other addicts interviewed for this story spoke on condition of anonymity.

From the town’s sheriff to addicts and their families, the people of Martinsburg said drug addiction has plagued it for decades. They blamed the proximity to cities such as Baltimore with addicts and drug dealers making the journey back and forth to buy and sell.

But the impact of heroin is something new. Each week there are more overdoses and sometimes deaths and they are often in public places – from the toilets of fast food restaurants and supermarkets to hotel rooms.

According to figures released last week by the US Center for Disease Control and Prevention, heroin-related deaths have quadrupled nationwide in the US as consumption of the drug has sharply risen.

The majority of heroin users, 80 percent according to the US Substance Abuse and Mental Health Services Administration, used prescription pain pills before trying the drug.

He blamed “a ‘feel-good society’ where the young are worried they’ll miss out on something, and an incredible level of ignorance”.

“Now young people in our high schools do not understand the difference between heroin and drinking a few beers. They get caught in a trap before realising there is even a trap there.”

Burgess said the full picture of how many students are trying heroin in high schools in this region of West Virginia state isn’t known – and a rate of up to 40 or 50 percent wouldn’t surprise him. Some users are beginning to experiment as young as 14 years old.

Some of Jenny’s friends did overdose and die. She said it became normal.

Jenny couldn’t explain why she got hooked. Her family, middle-class with its own business, is a stable one. Her parents, she said, are wonderful.

She explained that she became dependent on pain pills after a sport injury and heroin was everywhere at school.

Before they gave her an ultimatum, she had begun stealing from her parents and was dealing the drug. “I would make sales because if you sell three packs you get one for free.”

A year ago she did give up.

Her mother, a medical professional, nursed her back to health. Her every move was supervised. There have been two short relapses, but now she is moving to another US state where no one knows she used and she’d be “mortified if they found out”.

Jane became a mother for the third time while she was in prison. Her first two children were taken away from her because she was deemed unfit. Her youngest child is two and living with friends in the small town.

A heroin user for 15 years, she relapsed eight months ago after two years of being clean.

Her family life and childhood were difficult. When she first used heroin, she said she felt this was how she was meant to be. “I just felt so alive when I used it. I had no fear of rejection.”

That euphoria has since disappeared. “I hate the person I am. I hate the things I do, how I hurt everyone around me.”

A few weeks ago she lost her job at a factory. In her worst periods of addiction she has turned to stealing and prostitution.

She cried as she thought about reaching that point again.

It was a prescription for pain pills after a car accident last year that took her back to the drug. She hadn’t told the doctor of her addiction history.

She said when she began using again she realised how commonplace heroin is.

“Schools, the mall, even in homes for the elderly. They’re finding needles on kids’ playing yards.”

Many blame a lack of opportunity in the US state with poverty levels higher than the national average.

Jane recognises she is at a crossroads again. When she last quit, she said it was religion that saved her.

A few weeks ago her boyfriend John, also a heroin addict, saved her life. “She slid off the bed. I checked her pulse and she wasn’t breathing. I prayed to God … I held her nose and took a deep breath and blew into her mouth, and the moment I did she [gasped for air] and sat up,” he said.

Jane admitted being with John made stopping all the more harder. Both said medical help only works if it’s available in the exact moment an addict decides to quit.

“There’s a waiting list and they say we’ll see you next year at this time.”

Jane was tortured by the knowledge of what may come. “I already know the end result, what’s going to happen. I’m going to end up dying or in prison.”

Jack Riley, chief of operations at the Drug Enforcement Administration, agreed with that prediction.

He described the challenge he and other law enforcement officers face.

“There is a prescription drug epidemic unlike any we’ve ever seen,” Riley told Al Jazeera.

“That cannot be separated out from the growth of heroin in the US. At some point that supply [of prescription drugs] becomes too expensive, the medicine cabinet is empty, they can’t get it on the street and the next move is the dark road to cheap, very, very potent heroin that’s available in all of our big cities and all of our small cities across the country.”

His greatest concern is that so many US communities aren’t prepared for heroin’s arrival. He said, from local police to community leaders, teachers and most importantly parents, everyone must play their part.

Dr Burgess, who advocates alternative methods for the treatment of pain, said the medical community, too, must play its role.

He said the lessons of the crisis created by prescription painkiller Oxycontin when it was introduced 20 years ago still haven’t been learned.

West Virginia, he said, was one of the worst-affected US states.

“Everybody was introduced to this strong narcotic. People were on massive doses. Even experienced drug-addicts were blown away. There is still without question overprescribing of pain medication. It’s a quick fix and has been promoted in American culture. Most medical insurance will only pay for drugs not alternative treatments. We treat pain with narcotics casually.”

According to the US Center for Disease and Prevention, in 2012 alone “healthcare providers wrote 259 million prescriptions for painkillers, enough for every American adult to have a bottle of pills”.

Meanwhile, according to the DEA, law enforcement officers across the US are seeing the same pattern – increased trafficking of heroin from Mexico, which is cheaper and of higher-quality.

Heroin is now his agency’s greatest challenge, which is why, he said, it’s time to stop referring to “the war on drugs”.

“It shouldn’t be called a war, because that suggests there is a beginning and an end.” 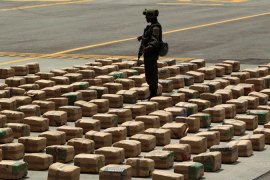 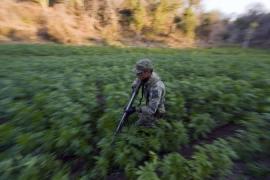 With more than 60,000 victims, politicians are analysing the impact of new US marijuana laws on Mexico’s war on drugs. 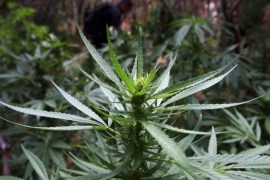 US drug legalisations reverberate in Mexico

Legalisation of small amounts of marijuana in some US states could encourage changes to Mexico’s anti-drugs policy. 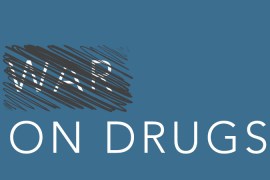 Exploring the “failing” drug war, from the Netherlands to Mexico and California to Connecticut.